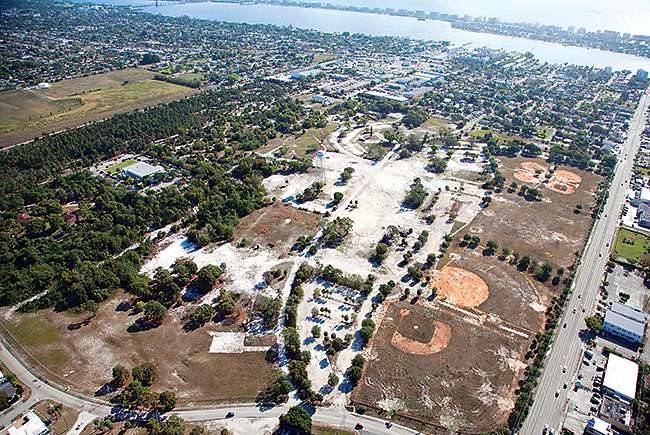 Lantana's on the road to recovery

Plans for an old hospital site will help tiny Lantana.

The 73-acre tract, one of the largest in-fill opportunities east of I-95, was bought for $15.6 million in 2015 by longtime local developer Kenco Communities, which partnered with Wexford Capital, a Greenwich, Conn., hedge and private equity fund manager that opened a West Palm Beach office in 2014.

Kenco made its name developing in the western suburbs. It’s planning 315,000 square feet of retail on part of the site (mostly big box and national tenants) and housing on the remainder. “We intend to make it something very special,” says Michael Langolf, vice president of Lantana Development, the Kenco-Wexford entity.

The retail component is scheduled for completion in 2017. Langolf says the site plan for the housing portion will be submitted at midyear; it can accommodate up to 1,091 units, but how many will be built and what portion will be rentals hadn’t been determined as of January.

The project is named Water Tower Commons after A.G. Holley Hospital’s old non-functioning water tower, which Kenco kept and is turning into a sculptural element.

The project is a boon for Lantana, a town of 11,000. The hospital made up 4% of its area, but as state property never paid property taxes. The finished project will add upscale housing and shopping to the area and employ 700 while paying $13 million in taxes over 20 years.

Friends contacted Czech-born Jan Bednar as soon as he arrived in the states in 2008, telling him that they wanted to buy goods online from U.S. sellers but that those sellers didn’t ship internationally or couldn’t process their payments. So he bought their items for them and then shipped their purchases overseas. It became a business, BedaBox, in 2014. The lion’s share of his business these days is handling logistics — from mail forwarding to heavy freight — for small and medium businesses that sell online. “We see a big opportunity,” he says. He’s introducing new software this year. BedaBox was in Florida Atlantic University’s inaugural Tech Runway class, a program to support and mentor startups. He employs 15.

DELRAY BEACH — Developer Anthony Pugliese is serving a six-month jail sentence after pleading no contest to charges that he cheated the late Fred DeLuca, founder of the Subway chain. Pugliese also agreed to pay $1.2 million. The two were collaborating on Destiny, a large-scale development south of Yeehaw Junction.

FORT LAUDERDALE — Broward schools superintendent Robert Runcie was named the state’s 2016 Superintendent of the Year by the Florida Association of District School Superintendents. The 11th U.S. Circuit Court of Appeals turned down BBX Capital and BFC Financial Chairman and CEO Alan Levan’s request for a stay on a district judge order barring him from serving as an officer for two years. Levan has to step down while his appeal of an SEC civil judgment against him is pending. The SEC sued and won on allegations that Levan and then BankAtlantic misled investors about its real estate portfolio before the market crashed. The Ocean Resort Residences Conrad Fort Lauderdale Beach, a condo/hotel and the first Conrad resort in the Americas, opened. It was developed by Andreas Ioannou, CEO of Orchestra Hotels & Resorts. Health care and hospitality industry uniform supplier Uniform Advantage is moving its headquarters downtown from Plantation and plans to add 50 jobs companywide over three years. It employs 180 in Broward and nearly 400 nationally.

JUPITER — The National Institutes of Health gave a pioneer award to Ryohei Yasuda, scientific director for the Max Planck Florida Institute for Neuroscience. The $4.8-million grant will go toward building knowledge of biochemical signaling related to mental disorders such as dementia, mental retardation and autism. Pioneer awards recognize researchers who have shown creativity and groundbreaking approaches.

PALM BEACH — Without admitting or denying wrongdoing, former Lydian Private Bank CEO Rory Brown agreed to pay $5,000 to settle a case brought by the Comptroller of the Currency over lending at Lydian that resulted in a $746,000 loss after the bank failed.

WEST PALM BEACH — Billionaire investor and major downtown landowner Jeff Greene paid $24 million for an entire city block near CityPlace, where he plans to build a mixed-use project including a luxury condo and hotel. FPL opened its “Manatee Lagoon — an FPL Eco-Discovery Center,” where the public can view manatees warming themselves in the warm water flowing from FPL’s Riviera Beach power plant.