Dean Saunders has been selling ranch and grove land since the mid-1980s. 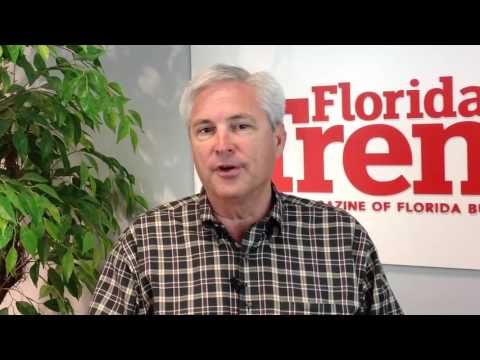 Florida ranches, farms and groves are attracting interest from foreign and institutional investors, says one of the state’s leading land brokers.

Dean Saunders is an eighth-generation Floridian and former state legislator who has worked as a commercial real estate broker since the mid-1980s, primarily selling groves and ranch land.

In recent years, he’s been involved in some of the biggest sales in Florida. In 2014, Saunders’ Lakeland-based firm represented AgReserves, the tax-paying affiliate of the Church of Jesus Christ of Latter-Day Saints, the Mormon Church, when it bought 380,000 acres in northwest Florida from St. Joe Co. Reportedly for more than $560 million.

Being able to help clients assess the value of their land is a key part of Saunders’ job. But when he got into commercial real estate, he says, the only report that tracked valuation in Florida was produced by surveying brokers — not by examining actual transactions.

Saunders says he benefited on more than one occasion from the survey methodology, which frequently reported valuations higher than the true market. “I represented a client or two whom I was able to make real happy” when they sold their land, he says.

But after the producers of the report stopped issuing it, Saunders decided to create his own report using verified sales to track market trends. Since 2010, his Lakeland-based firm has held a conference in April at which he presents his annual “Lay of the Land Market Report.” This month, the conference will take place at ChampionsGate near Orlando.

Among the trends Saunders sees: Demand for farm land is outpacing that for ranch land and citrus groves. Ranch land that might have been selling for $2,500 an acre three years ago has risen to about $3,000 an acre or higher, he says. Farm land that’s irrigated and set up to grow crops can sell for between $4,500 and up to $11,000 an acre — with farm land in south Florida bringing higher prices because some crops can only be grown in subtropical climates.

Institutional and foreign investors are moving into the market for undeveloped land — with most of the interest coming from investors from Brazil, Argentina and Chile. “It’s basically flight capital,” Saunders says, particularly in the case of Argentina.

The future of grove land has entered an uncertain period because of the devastation wrought by citrus greening. Mature trees are producing less. Fruit on greening-infected trees is dropping prematurely, reducing yields further. One relatively unreported effect of greening is reduced acid in the fruit: Good orange juice depends on the right balance of sweetness from the sugar content of the fruit and the “tang” from its acidity. Saunders says reduced acid levels mean “there’s no body in the juice.” In November, the Florida Citrus Commission lifted its usual standards for acidity, ruling that the “unusual growing conditions” created by greening mean that a substantial portion of the orange crop could fail to meet the acidity standards that allow it to be harvested.

Grove owners, Saunders says, are optimistic that a solution to greening will be found, but many small growers fear they won’t survive long enough and are selling out. The result, he says, will be to hasten the existing trend of smaller growers getting out and bigger growers getting bigger.

In 1995, as the Legislature reauthorized the state’s Preservation 2000 land acquisition program, it expanded the ability to use conservation easements statewide.

Since 1995, the acreage in Florida under conservation easement has grown to more than 1.1 million acres — nearly half of that held by the state’s water management districts.

Saunders says the purchase of conservation easements is a marketfriendly way to extend the dollars the state allocates to buying environmentally sensitive land since it doesn’t have to purchase the land outright.

Since voters passed Amendment 1 in 2014 to fund land acquisition by the state, Saunders says he’s been dismayed to see the Legislature and Gov. Rick Scott divert the money earmarked for land acquisition — including conservation easements — to other uses. The governor, he says, “doesn’t like conservation and is trying not to do conservation.”

Ultimately, he believes, voters will put heat on lawmakers in the same way they did after the Legislature created the state lottery to expand education funding but then used the new revenue simply to displace general revenue. But “until the Legislature feels that heat, they won’t change,” he says.

Saunders says that while he makes his living selling land, he thinks it’s “important that not everything get developed.” Conservation easements, he says, are a good way for the government to preserve green space and limit development while keeping land on the tax rolls. But easements, he says, also create the right kind of incentives for landowners who want to realize the value of their land while continuing to farm or ranch it.

“Florida has been a leader in the conservation movement, no doubt,” he says. “We can do more. We’re still going to grow, but as we grow there will be a greater demand for these kind of resources.”