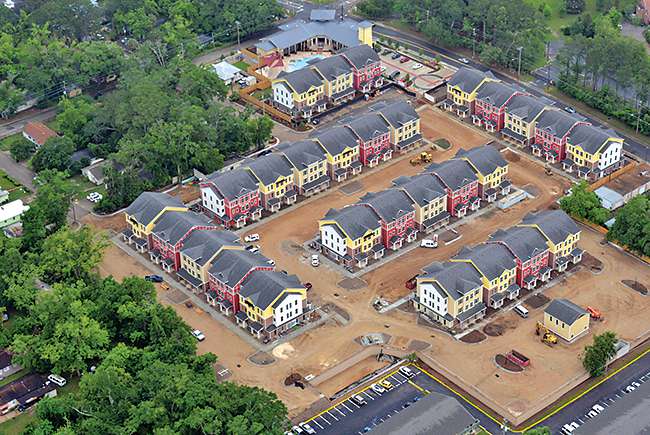 One of the hottest sectors in commercial construction in recent years has been student housing —no longer tiny dorm rooms, but suite-style apartments in complexes with features calculated to appeal to millennial-era students, from rock-climbing walls to exercise rooms and study lounges. A 2014 study found Tallahassee the largest student housing market in the country for that year, with some 26,000 beds delivered.

Among the companies capitalizing on the trend is FaverGray of Jacksonville Beach, which has made student housing part of its strategic plan. Along with other commercial work, the firm has completed 15 student housing projects representing more than 3.8 million square feet, $239 million in investment, and 8,639 beds.

John A. Fischer, director of business development and preconstruction services for the company, says FaverGray has seven student housing projects under construction representing more than 2 million square feet, $232 million and 4,580 beds. The firm will complete half of the projects in 2016 and the other half in 2017 in time for the start of the school year.

Fischer says the key to success in the student housing market is the ability to complete projects on schedule — “complete in time for the start of new school year regardless of weather or other extenuating conditions.”

As the CEO of BreathTec Biomedical, a biomedical startup in Gainesville, Michael T. Costanzo, 26, is working to create a device that uses a non-invasive breath test to screen for diseases like lung and breast cancers, diabetes, Parkinson’s and Alzheimer’s. Costanzo, who holds a Ph.D. in chemistry from the University of Florida, directs research he was involved in as a student. BreathTec is one of the first companies focused on breath analysis for medical purposes using specialized mass spectrometry. The company has raised more than $3 million.

Brian Moulder is executive vice president at CBRE Group Jacksonville. Moulder will be responsible for multifamily properties and land in north Florida.

Jacksonville Mayor Lenny Curry appointed Lindsey Brock to a four-year term on the Northeast Florida Regional Transportation Commission. He is a maritime, transportation and logistics attorney and founding president of the Transportation & Logistics Council with the JAX Chamber.

GAINESVILLE — Researchers at the University of Florida’s Institute of Food and Agricultural Sciences have developed genetically modified citrus trees that show enhanced resistance to greening and other diseases. > A University of Florida Health research team has been approved for more than $15 million in research funding by the Patient-Centered Outcomes Research Institute to study the effectiveness of three medications used to treat hepatitis C over a five-year, randomized clinical trial.

JACKSONVILLE — Glynn Wilson, CEO of TapImmune, an immunotherapy company that develops vaccines to treat cancer and infectious diseases, has relocated his company’s headquarters from Seattle to Jacksonville. TapImmune is partnering with the Mayo Clinic, which was recently awarded $13 million from the National Institutes of Health to develop a vaccine for women with a kind of breast cancer called triple negative that resists traditional chemotherapies. > Jacksonville City Council will begin reviewing Mayor Lenny Curry’s $45-million proposal to help Jacksonville Jaguars’ owner Shad Khan build a $90-million amphitheater and indoor practice facility next to EverBank Field. > Florida Blue is partnering with Alignment Healthcare to open six clinics in Florida providing comprehensive care through a new plan called Blue- Medicare Preferred HMO. Two of the clinics will be in Jacksonville and will treat patients with chronic conditions such as diabetes and congestive heart failure. Drone Aviation Holding, a Southside company focused on aerial and land-based surveillance and communications, completed a $3.7-million stock offering, selling 745,000 shares to investors.

NORTHEAST FLORIDA — St. Augustine, Ponte Vedra and The Beaches Visitors and Convention Bureau estimated the number of hotel rooms will increase by 800 over the next three years — a 13% jump.

ST. JOHNS COUNTY — Voters approved a halfcent sales tax referendum. The tax, expected to bring in $13 million annually to the St. Johns County School Board, will remain in effect for 10 years.

44,000 Florida homes closed by international buyers — 12% of all homes sold

880 Number of homes in Jacksonville/ St. Augustine purchased by international buyers – 2% of the total