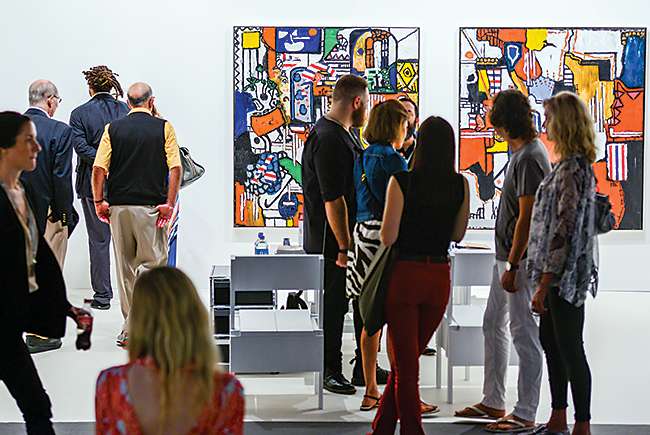 The art of the deal: Art fairs seeing record attendance in Miami

Several of the more than 20 fairs that make up early December’s Miami Art Week saw record attendance in 2015. “This year was their most successful ever,” says Rolando Aedo, executive vice president of the Greater Miami Convention & Visitors Bureau, which tracks tourism numbers. “Art Basel took a relatively slow time of year and made it into one of the top-performing weeks of the year. As go hotels, go everything else.”

And hotels were hot, with the average room rate up 4.4%. Art Basel saw a record 77,000 visitors during its five days in Miami Beach — a 5% increase from 2014. Attendance at Art Basel has more than doubled since its 2002 inception. Meanwhile, the main fair in the city of Miami, Art Miami/ CONTEXT Art Miami, drew 79,000 visitors during the week — and 14,500 in just one evening at its VIP preview.

Works from 267 galleries in 32 countries

Estimated value of works on view: $2.5 billion to $3 billion

Visitors from more than 110 countries, with first-time collectors from Cambodia, Ethiopia, Nicaragua, Romania, Togo and Zimbabwe

28 projects have been successfully funded and raised more than $590,000 from more than 3,500 backers through Art Basel’s crowdfunding initiative to support non-commercial art projects worldwide (as of Dec. 10).

Two pieces by Mario Carreño and Amelia Peláez sold for more than $3.5 million.

DORAL — The state’s Agency for Health Care administration gave Jackson Health System approval to build a 100- bed hospital on a site it acquired during 2015 but denied HCA’s request to open a hospital in the same area.

Hermès of Paris opened its 13,000-sq.-ft. flagship store in the Design District and moved out of the temporary store it had there. > The Florida Institute for the Commercialization of Public Research invested $300,000 in emotion and face analytics company Kairos after the company licensed technology from the University of Central Florida. The Florida Institute also invested an undisclosed amount in Genetic Networks, which licensed technology developed at the University of Miami and uses a data-driven approach to accelerate drug discovery and predictive medicine. > French IT company NetReviews opened its U.S. and Latin American office at the Venture Hive entrepreneurial hub. > Midtown Opportunities sold the development site for Six Midtown, as well as additional land, to Chicago- based AMLI Residential for $55 million. AMLI plans two rental buildings. > Accounting firm Mallah Furman & Co. And its 60-plus employees merged with New York-based Eisner- Amper. > Online Englishlanguage school Open English acquired Next University, a technology education startup. Both companies are based in Miami and were founded by Andrés Moreno; they have a combined 1,565 employees around the Americas.

MIAMI-DADE COUNTY — Germany-based Allianz Real Estate of America purchased a 49% interest in the Waterford at Blue Lagoon corporate park for $374.5 million from TIAA-CREF, with whom it now co-owns the six class-A office buildings on more than 26 acres. > Triple Five Group’s proposed American Dream Miami in the northwestern part of the county would be 6.2 million square feet. The development will also include 2,000 hotels rooms.

The University of Miami hired Steven M. Altschuler as senior vice president of health affairs and CEO of its Uhealth-University of Miami Health System. A physician who was CEO of Children’s Hospital of Philadelphia for 15 years, he replaces Pascal J. Goldschmidt, who remains dean of UM’s Leonard M. Miller School of Medicine.

BioNitrogen Holdings, which is in Chapter 11 bankruptcy, hired Graham Copley as CEO, replacing Carlos Contreras, who remains chairman of the board.