Acclaimed architect Frank Lloyd Wright envisioned a college campus of his own design "coming out of the ground and into the light just like a child of the sun." (Photo is of the William H. Danforth Chapel at Florida Southern University, designed by Frank Lloyd Wright) 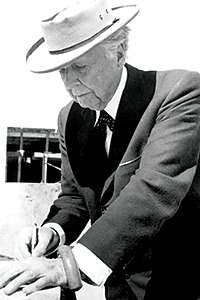 Florida Southern's Frank Lloyd Wright architecture continues to attract both students and visitors to the school.