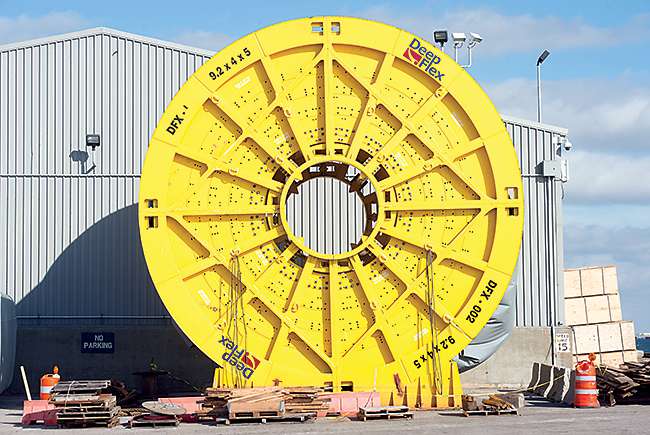 Slippery slope: The slide in oil prices puts a Port of Pensacola project on hold

With a $50-million price tag, the proposed DeepFlex manufacturing facility was heralded as the largest, and perhaps most important, capital project in the Port of Pensacola’s history. The state-of-the-art plant was to manufacture subsea, flexible pipe for the offshore petroleum industry, creating several hundred highpaying jobs in the process.

But in March, the Texasbased company halted work on the 70,000-sq.-ft. structure. And since then the building, about 90% complete but devoid of any machinery, has become another victim of the steep decline in oil prices that began in mid-2014.

When DeepFlex signed the contract to build the plant, crude oil prices were above $100 a barrel.

“What happened with DeepFlex was kind of a perfect storm in the realm of project financing,” says Amy Miller, the port’s director. “DeepFlex was financing the project in phases. They were coming up on the end of one of their funding phases when the price of oil tanked at below $40 a barrel.”

Miller says DeepFlex is still paying its $15,500 monthly rent for the fouracre site. Some vendors and subcontractors are not as fortunate, however, holding unpaid invoices from early 2015.

Meanwhile, Miller says she expects DeepFlex to resume construction this year. But she admits that prospect is unlikely if crude oil prices remain depressed.

“I think there probably is a good chance of further delays,” Miller says. “The price of oil certainly is not rebounding as quickly as the industry thought it would.”

Jeff Phillips, the 39-year-old co-founder and CEO of the Pensacola-based search firm Accountingfly, recently was named to Accounting Today magazine’s list of top 100 most influential people in the industry for the second year in a row.

Founded in 2012, Accountingfly specializes in matching recent college graduates and experienced accountants with national accounting firms through the use of specialized software the firm has developed.