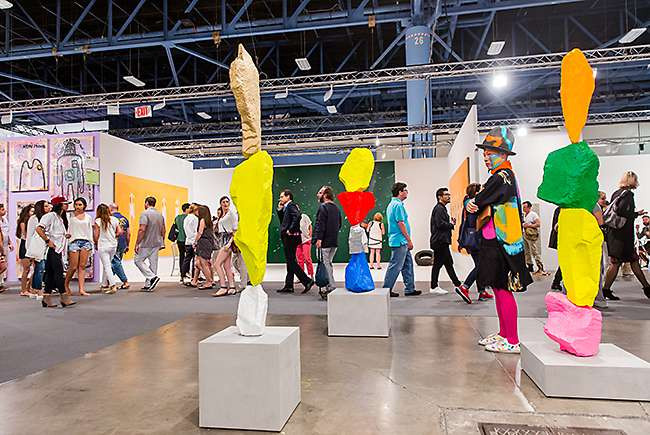 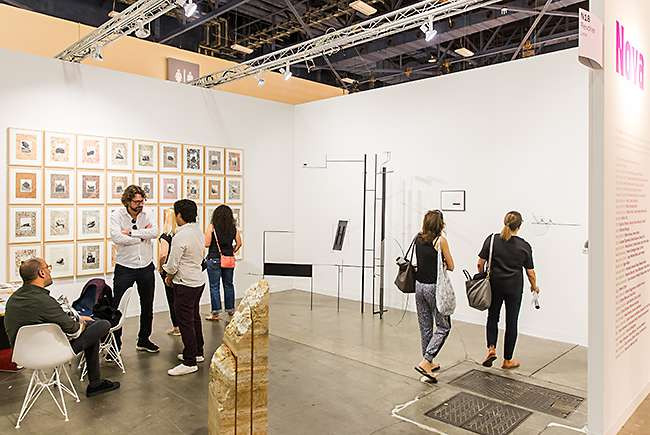 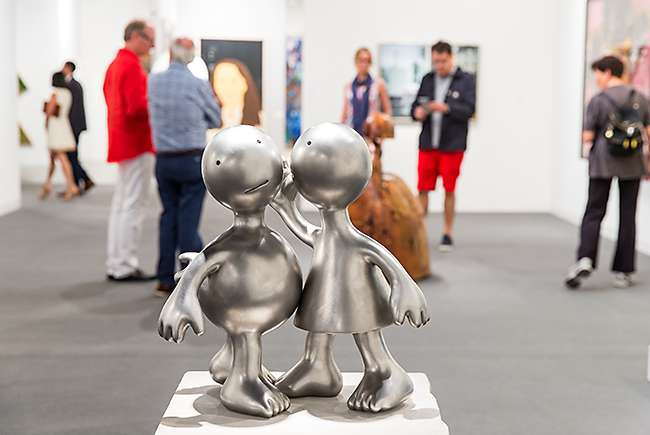 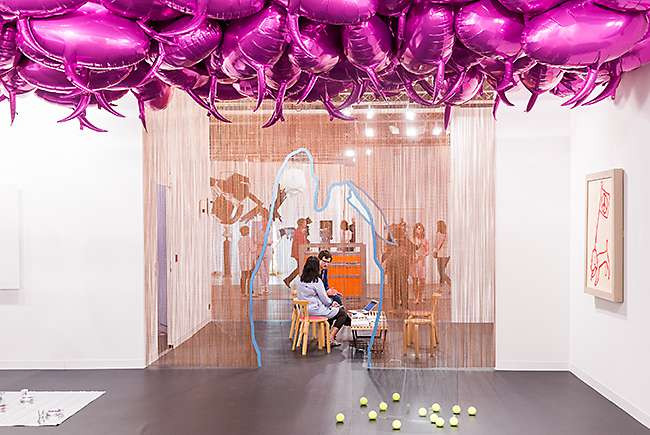 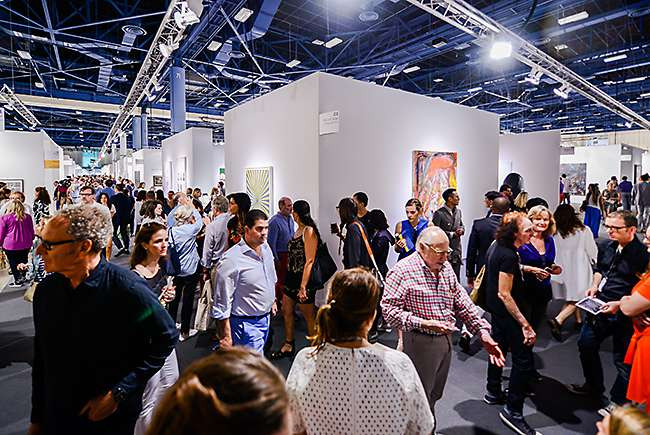 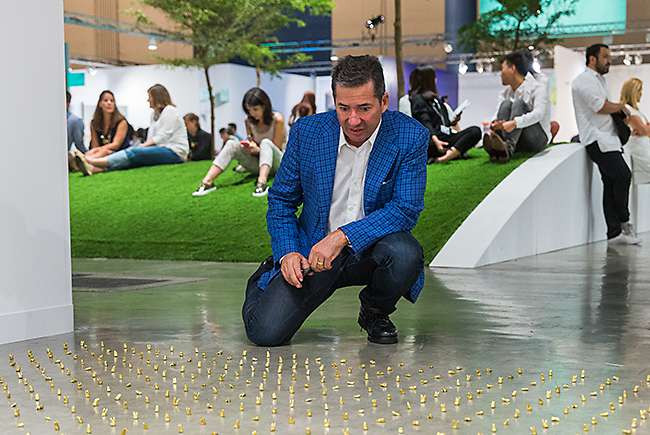 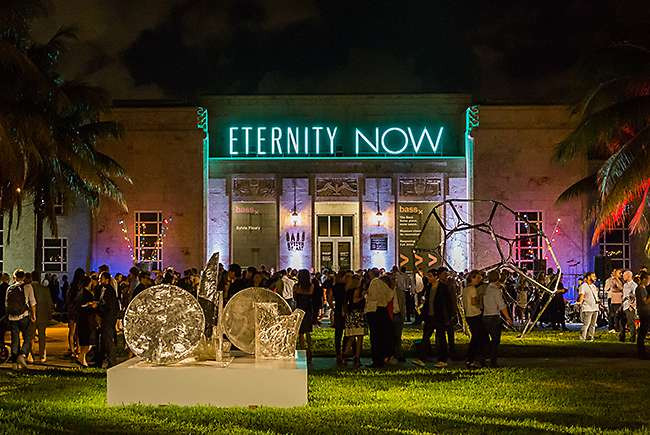 The 14th edition of Art Basel in Miami Beach closed amid reports of strong sales and an enthusiastic reception from collectors, institutions, gallerists and critics from across the Americas and the world.

Pairing curated installations of Modern and contemporary work with stimulating programming, Art Basel’s 2015 edition featured strong sales across all levels of the market. Presenting 267 leading international galleries from 32 countries, the show attracted an attendance of 77,000 over five days, including major private collectors as well as directors, curators, trustees and patrons of nearly 200 museum and institution groups. Collectors from over 110 countries attended the show, with first-time collectors coming from Cambodia, Ethiopia, Nicaragua, Romania, Togo and Zimbabwe. The show was spearheaded by Noah Horowitz, Art Basel’s newly appointed Director Americas.

'It was surprising to see how Art Basel in Miami Beach, which already had in the previous years a top standard, could still increase its level by showing high quality art and attracting many new collectors from around the world. We are very happy that we could place all of the important works we brought, and were positively surprised by the connoisseurship of many visitors.'
Thaddaeus Ropac, Founder & Director, Galerie Thaddaeus Ropac, Paris, Salzburg

'We wish we had brought more work because we've sold 80 percent of the booth. We're really happy that sales have been across the board from historical to younger artists.’
Andrea Rosen, President, Andrea Rosen Gallery, New York

'We had an excellent fair, if not one of the best Art Basel in Miami Beach shows ever. We sold a number of high quality pieces. There was sales activity every day, not only at the opening, with a good mix of new contacts and returning collectors.’
Annette Kicken, Owner, Kicken Berlin, Berlin

'We usually do well at this fair, but this year, we had an exceptional experience and sold out the entire booth on the first day. Collectors are informed, thoughtful and very actively interested, so this has been a truly exhilarating experience for us.’
Susanne Vielmetter, Owner / Director, Susanne Vielmetter Los Angeles Projects, Culver City

'Art Basel in Miami Beach gets stronger each year, and the key factor in its success is the mix of collectors buying emerging artists along with collectors, museums and foundations buying mid-career and historic work at much higher price points. Visitors are focused on the fair itself, rather than being distracted outside. I only wish that all fairs could be to the ultimate level of Art Basel.’
Alison Jacques, Owner, Alison Jacques Gallery, London

'As usual, Art Basel's show in Miami Beach has been very eventful inside and outside the fair. It´s been a great week and we have had the pleasure of showing important works by historic Latin American artists alongside our younger artists, which made it a very special week for us and our collectors.’
Alexandra Garcia Waldman, Artistic Director, Galeria Nara Roesler, São Paulo, Rio de Janeiro

‘We took a bit of a risk bringing historic work – video art, no less – but the response here has been tremendous. The museum interest has been particularly strong. Many institutions that had previously overlooked video are now taking a second look.’
Cristin Tierney, Owner / Senior Director, Cristin Tierney Gallery, New York

'Art Basel in Miami Beach has been very successful for us this year. Starting off with the sale of Damien Hirst's major sculpture "The Incomplete Truth" in the first couple of hours of the opening day, we experienced a strong suite of sales across the board. All in all, a fantastic week.’
Daniela Gareh, Partner, White Cube, London, Hong Kong

'We’ve had a great response to our booth this year, especially to the sculptures we brought by Guillermo Kuitca. There is always a lot of energy at Art Basel in Miami Beach, as well as the opportunity to engage with new and returning collectors.’
Alexandre Gabriel, Director, Galeria Fortes Vilaça, São Paulo

‘Not only is Art Basel in Miami Beach a wonderful fair, but it is an opportunity to connect with both new and old friends. We have had great success here. We are so pleased to show our artists this year across the fair, from our stand in the main halls, to Hank Willis Thomas in Public, to Carrie Mae Weems in Film.’
Jack Shainman, Owner, Jack Shainman Gallery, New York, Kinderhook

‘The quality and atmosphere were excellent, with an amazing presence of Latin American collectors. It was also exciting to see a growing interest in Cuban art, and the fair has been the perfect occasion for us to present our new project in Havana.’
Maurizio Rigillo, Director & Partner, Galleria Continua, San Gimignano, Beijing, Les Moulins, Havana

‘The fair has been a tremendous success for us, both critically and commercially. We've placed Rosalyn Drexler’s works with major institutions, and her work finally seems to be getting the recognition that it deserves! Survey is a perfect platform for overlooked or under-appreciated artists and allows for just the kind of re-presentation that is so critical to these artists’ careers. Every year, for five days in December, the show forces the international art world to focus.’
Garth Greenan, Director, Garth Greenan Gallery, New York

‘We were delighted to find that once again there was a strong audience for conceptual art at Art Basel in Miami Beach, and our Kabinett presentation received great attention from both museum curators and collectors.’
Jocelyn Wolff, Founder, Galerie Jocelyn Wolff, Paris

‘We are very grateful to be part of an inspiring Positions sector. Showing a two-hour-long work by Henning Fehr and Philipp Ruehr is a truly rewarding experience, we have received fantastic feedback and serious interest.’
Max Mayer, Founder, Galerie Max Mayer, Dusseldorf

'We were very happy to be at the fair for the first time. Our Survey booth presented Shinjiro Okamoto and attracted collectors from all over the world.'
Yukihito Tabata, Director, Tokyo Gallery + BTAP, Tokyo, Beijing

‘We were positively surprised by the amount of serious and discerning collectors and new institutional contacts we made during our first showing in Miami Beach.’
Gregor Staiger, Owner / Director, Galerie Gregor Staiger, Zurich

The show’s daily talks program brought together leading figures from around the world and was attended by over 1,800 visitors. Conversations opened with the Premiere Artist Talk between Jenny Holzer and Trevor Paglen. Hans Ulrich Obrist led a panel on ‘The Artist as Slow Traveler’ with Shilpa Gupta, Paulo Nazareth, Stephen Shore, Shahzia Sikander and Samson Young. In ‘Should Art Schools Prepare Artists for the Art World?’, András Szántó discussed the role of an art school education with Sanford Biggers, Nicolas Bourriaud, Howard Singerman and Rosanne Somerson, while on Sunday, December 6, artist Nicole Eisenman spoke with her gallerist Susanne Vielmetter. The Salon program featured curator Stéphane Aquin in conversation about the Cuban art scene with the artist Carlos Garaicoa and art historian Iliana Cepero Amador. Additional panels considered the role of the archive, the ethics of art advising, audio and sound works, collecting as a political act, the evolution of contemporary art in Los Angeles, and new hybrid art spaces. Videos of all Conversations and Salon talks are available at artbasel.com/miamibeach/talks.

On Thursday, December 3, BMW and Art Basel announced the shortlist of artists nominated for the second BMW Art Journey, a juried award that enables emerging artists to go on a journey of creative discovery to a destination of their choice. The selected artists – Henning Fehr and Philipp Rühr at Galerie Max Mayer (Dusseldorf), Dan Bayles at François Ghebaly Gallery (Los Angeles) and Fritzia Irizar at Arredondo \ Arozarena (Mexico City) – will be developing proposals for the journey, with the winner to be announced in early 2016. The BMW Art Journey is open to artists from Positions and Discoveries, Art Basel's sectors for emerging artists in Miami Beach and Hong Kong. For more information, please visit: bmw-art-journey.com.

Beyond the exhibition halls, South Florida’s cultural institutions and museums once again enriched the week. Highlights included the first exhibition in the United States by the Cuban artist Gustavo Pérez Monzón at the Cisneros Fontanals Art Foundation; ‘Anselm Kiefer: Paintings, Sculpture and Installation’ and ‘Susan Philipsz: Immersive Sound Installation’ at The Margulies Collection at the Warehouse; ‘NO MAN'S LAND: Women Artists from the Collection’, an exhibition of women artists at the Rubell Family Collection; and ‘You've Got to Know the Rules... to Break Them’ at The de la Cruz Collection Contemporary Art Space.

Furthering its long-standing engagement with the digital sphere, Art Basel launched an updated mobile app, which provides essential information regarding the show, including an interactive floorplan and a global artworks catalog of galleries participating at Art Basel’s shows.

Directly following the closing of the show, the Miami Beach Convention Center will undergo planned renovation. Phased around the upcoming Art Basel shows, the construction schedule ensures that the 2016 edition will take place with the same floorplan as this year, while the 2017 edition will feature a new floorplan. Renovations will be completed before Art Basel returns to Miami Beach in December 2018.

Art Basel stages the world's premier art shows for Modern and contemporary works, sited in Basel, Miami Beach and Hong Kong. Defined by its host city and region, each show is unique, which is reflected in its participating galleries, artworks presented, and the content of parallel programming produced in collaboration with local institutions for each edition. In addition to ambitious stands featuring leading galleries from around the world, each show's exhibition sectors spotlight the latest developments in the visual arts, offering visitors new ideas, new inspiration and new contacts in the art world.

UBS, global Lead Partner of Art Basel, has supported the organization for more than 20 years. As Art Basel’s global network has expanded, so too has UBS’s commitment and lead partnership, which includes all three shows in Basel, Miami Beach and Hong Kong. In addition to its support of Art Basel, UBS has a long and substantial record of engagement in contemporary art: as a holder of one of the world’s most distinguished corporate art collections, as an active partner in global contemporary art projects such as the Guggenheim UBS MAP Global Art Initiative, and as a source of information and insights through the UBS Art Competence Center, UBS Arts Forum and its new contemporary art news-focused app, 'Planet Art'.