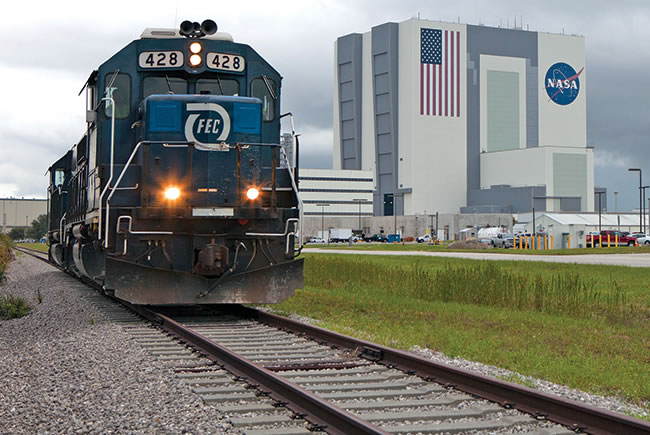 About 80% of Port Canaveral’s business comes via cruise ships. Port leaders would like to balance that out with more cargo traffic. But the Brevard County seaport, built on a barrier island and hemmed in by an Air Force base to the north and by densely developed beach communities to the south, needs a rail spur to grow the cargo side of its ledger.

One idea port leaders have proposed would involve building a new track due west and then north to the Kennedy Space Center to connect with tracks owned by Florida East Coast Railway. But that route would require building a bridge across the environmentally sensitive Banana River.

Port CEO John Walsh initially dismissed complaints from local activists — with disastrous consequences. During one public forum, he ridiculed opponents as “luddites” who weren’t genuinely concerned for the environment. That further enflamed opponents, who then pressured other elected leaders in Brevard County to come out against the Banana River plan. Walsh later apologized, but it was not enough to satisfy his bosses on the Canaveral Port Authority board, who asked for his resignation, citing the soured relations with community stakeholders. Walsh formally leaves the port Jan. 21.

The port is looking at other rail options, although none is ideal.

“Most cargo ports, particularly if they’re going to ship long distances, have rail. A connection to some of the existing rail infrastructure would add another dimension to our cargo development,” says Canaveral Port Authority Commissioner Tom Weinberg.

In the meantime, Canaveral’s cargo business is picking up. In June, Dubai-based Gulftainer opened a new cargo terminal with an initial capacity of 200,000, 20-foot equivalent units (TEUs) and plans to expand to 750,000 TEUs. A month later, Flagler Global Logistics broke ground on an inland logistics facility with Port Canaveral as its first tenant. And in September, NYK of Japan announced that it would begin shipping automobiles from Canaveral to Central and South America.

While a rail connection would help, it won’t solve all of the port’s problems because the competition is so intense, says Stan Payne, who was Port Canaveral’s CEO for nine years and is now a shipping and transportation consultant.

“The issue is that you have Miami and you have Port Everglades and you have JaxPort all on the east coast, and all either with new railyards or in the state of building intermodal yards,” Payne says.

Sandy Cagan, vice president of Cagan Management Group, couldn’t stop thinking about a TV news report she saw about a “cat cafe” in New York. Customers sip lattes while sitting among, and playing with, adoptable cats. When a gym moved out of her company’s flagship Cagan Crossings mixed-use development in Clermont, she decided to build her own cat cafe. Working with the South Lake Animal League, a no-kill animal shelter, she designed plans for a 1,400-sq.-ft. cafe connected — via double-doors — to a 750-sq.-ft. cat “play area” where, Cagan says, people will be able to “play with the cats, cuddle with the cats, read a book or just hang out and enjoy the cats.” The cafe will likely have between 12 and 15 kittens and cats available for adoption at any one time, overseen by volunteers from the animal shelter. Cagan says she hopes to have the cafe open by the spring.

APOPKA — Orlando developer MMI Development will front $6.2 million to pay half the cost of an interchange off the State Road 429 toll road to serve a 272-unit apartment complex it plans to build. The city will repay the developer over 10 years.

DAYTONA BEACH — A Volusia County judge blocked a proposed referendum that would have made it more difficult for the county to further reduce driving on the beach.

LAKE BUENA VISTA — Disney will break ground next year on a 14-acre complex based on the Star Wars film franchise. An opening date has not been set, though construction is likely to take several years. Disney also announced that this holiday season will be the final one for its 20-year-old Osborne Family Spectacle of Dancing Lights. Disney plans to demolish the area inside its Disney Hollywood Studios theme park to make way for the Star Wars land and other attractions.

ORLANDO — The University of Central Florida revised its plans for a downtown campus to begin with a single $60-million building that would serve an estimated 7,500 students upon opening. The university will ask the state to pay a third of the cost. Gov. Rick Scott vetoed money for the campus last year. > CNL Financial Group will spin off its CNL Commercial Real Estate arm into a separate company lead by the real estate firm’s existing management and HQ Capital Real Estate. > J.A. “Jim” Hinson, former president, CEO and chairman of the Dr. Phillips Charities, died Sept. 21. As head of Dr. Phillips, Hinson oversaw more than $150 million in grants to area charities and was also active with organizations such as the Orlando Health Foundation, the YMCA, United Arts of Central Florida and Florida Citrus Sports.

OSCEOLA COUNTY — Commissioners approved a longrange sector plan to guide development of 133,000 acres of ranchland owned by the Mormon Church. Commissioners rejected an ordinance that would have extended a living wage to county contractors. > Harris Corp. signed on as a partner in an advanced manufacturing research center being built in the county. > Construction is expected to start in November on an extension of the SunRail commuter-train system from southern Orange County to Kissimmee.

PALM BAY — Publicly traded Oakridge Global Energy Solutions, which makes batteries and other energy storage products, will invest $270 million and add 1,000 jobs after negotiating an incentive deal with the state.

SEMINOLE COUNTY — Ignoring objections from Gov. Rick Scott, the Florida Cabinet voted 3-1 to spend $4.1 million to buy the development rights to the nearly 1,300-acre Kilbee Ranch. The property will continue to be used for cattle grazing.