Florida: The most veteran-friendly state

Home to more than 1.6 million veterans, Florida has provided a number of tax and related benefits to veterans and their families in an effort to become the most veteran-friendly state in the nation. To celebrate Veterans Day, Florida TaxWatch compiled a list of Florida’s veteran-friendly policies. 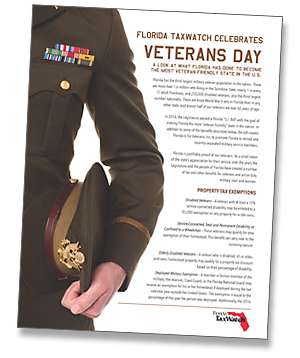 “Florida is proud of the brave servicemen and women who have chosen to build their lives and raise their families in the Sunshine State,” said Dominic M. Calabro, President and CEO of Florida TaxWatch, the privately supported government watchdog. “Our Legislature and Governor have recognized the importance of giving back to those who have sacrificed for us, and their commitment has resulted in Florida becoming the most veteran-friendly state in America.”

The 2014 Legislature passed Florida’s “G.I. Bill” to implement many of these reforms, including property tax and professional license fee exemptions, education and employment assistance, and drivers license extensions for Florida veterans.

Veterans Day is November 11, and began as Armistice Day, celebrating the first anniversary of the end of World War I. The United States has celebrated Veterans Day as a national holiday since 1938.

“Florida TaxWatch is pleased to honor and thank Florida veterans for their service,” added Calabro.