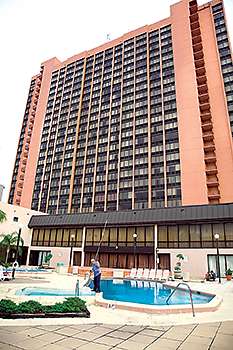 A downtown Fort Myers eyesore gets a makeover.

Seemingly troubled from its inception, the structure was designed to be a hotel-casino, but legislation to allow casinos in Florida never passed. The 417-room hotel, the tallest building in town in the 1980s, proved too big for the market and fell into foreclosure.

It got a second chance when a hotelier family from Thailand bought it in 1993 for $6.7 million. It operated — not very successfully — as a Sheraton, Ramada and, ultimately, as the Ambassador Hotel. In 2001, the family's patriarch died in a car crash, and the hotel became mired in a dispute over his assets. It closed in 2008, and the Amtel building has sat vacant for seven years.

Now, it's getting a third chance. New York-based developer Bob MacFarlane bought the building in January for $13.5 million and is turning it into a 55-and-over apartment complex called Campo Felice.

Workers are gutting the interior and will replace the building's coral exterior with a modern glass facade. The estimated cost of the renovation is $60 million, with completion expected late next year.

MacFarlane, who developed the Beau Rivage condominiums nearby, says Campo Felice will include 323 apartments, a 48-seat movie theater, a pool, fitness center, two restaurants and a bistro and bar. Rents will range from $1,900 to $3,500.

Meanwhile, another developer, Californian Steve Goodman, plans to build a 225-room Sheraton downtown next to the city's Harborside Event Center, which will undergo a $9-million renovation.

Since 2003, more than $700 million in public and private investment has poured into downtown, and the area could see in excess of $200 million worth of additional projects, including a high-rise condominium development by Miami-based Jaxi. "The interest level has picked up considerably," Paight says.

To motivate and entertain his sales team and corporate staff, entrepreneur Mark Pentecost hosts events at two properties he owns in southwest Florida: Stoneybrook Golf Course in Bradenton and a 1,000-acre cattle ranch in Myakka City. Pentecost now has another place for company gatherings. In July, he paid $14.5 million for Little Bokeelia Island, a 104-acre private retreat in the Gulf of Mexico off Lee County. The property includes a Spanish-style house, several guest cottages, a tennis court, pool, koi pond and waterfall. Pentecost is founder and CEO of Palmetto-based It Works!, a direct sales company that markets dietary supplements and skin-care products. Sales passed $530 million last year.

MANATEE COUNTY - Ellenton-based Feld Entertainment is moving its motor sports division to Manatee County from Aurora, Ill. The company will receive $2 million in state and local incentives for adding 200 jobs with an average annual wage of $72,000 over the next five years.

RIVERVIEW - BlueGrace Logistics, a transportation logistics company founded in 2009, plans to expand its headquarters and create 100 jobs by 2017.

TAMPA - Feldman Equities plans to develop a 52-story mixed-use tower on a riverfront lot where a Trump-branded high-rise had been planned 10 years ago. It would be the tallest building on Florida's west coast. > Tampa-based pub chain Beef O' Brady's launched a fast-casual spinoff called Beef's Express, with its first location in Lakeland. > Software firm Accusoft will receive $750,000 in state and local incentives as part of a $5.25-million expansion. The firm plans to double its workforce in the next five years, adding 125 jobs. > Canada-based Emera reached a deal to buy TECO Energy, t h e parent of Tampa Electric and Peoples Gas, for $10.4 billion. The deal is expected to close by mid-2016. > Moffitt Cancer Center received a $3.6-million grant from the NIH to study the safety of electronic cigarettes and their effectiveness in helping smokers quit. > Local startup SynDaver Labs plans to raise $1 million in a private offering to expand operations. SynDaver, which makes human models for training in schools, hospitals and military installations, got a $3-million offer after an appearance on ABC's "Shark Tank," but the deal fell through.