Florida earns a B- for small business friendliness, improves in 2015 survey

Small business owners strongly approve of Florida's tax regulations but find the state a challenging location to start a business, according to Thumbtack’s annual Small Business Friendliness Survey. Complete results for Florida are published at https://www.thumbtack.com/fl/.

Nearly 18,000 U.S. small business owners responded to the survey, including 1,709 in Florida. The study asked respondents to rate their state and city governments across a broad range of policy factors. Thumbtack then evaluated states and cities against one another along more than a dozen metrics.

“Small business owners on Thumbtack have consistently told us that they welcome support from their governments but are frequently frustrated by unnecessary bureaucratic obstacles,” said Jon Lieber, Chief Economist of Thumbtack. “Florida's small businesses like the tax climate in the state but report there is a lot of room for improvement if the state wants to be more appealing to entrepreneurs.”

“Fees and taxes to start a business are high and registration requirements are excessive,” commented a photographer in Jacksonville. “Enforcement of these regulations for those who don't comply is almost nil, thus putting others in my profession who do comply and pay the fees and taxes at an unfair position.” 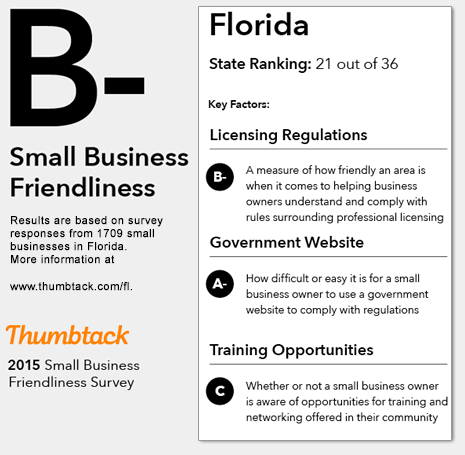 Effective licensing was just as friendly as no licensing - Small business owners who found licensing compliance to be “very easy” were just as favorable towards their city governments as respondents who weren’t required to be licensed at all. By contrast, licensed professionals in cities with complicated requirements or inconsistent enforcement reported the lowest approval rates.

Training experience was the top factor in both state and city rankings - Offering training on developing a business and navigating the local economic and policy environment was the single biggest factor that influenced perceptions of friendliness. In cities, training was 78 percent more important than the number two factor.  On the state level, small businesses who had a positive training experience were 1.5 times more likely to rate their states as being very supportive.

High quality websites matter - Investing in a high quality, easy-to-use website that provides useful information and decreases the costs of regulatory compliance improves overall perceptions of a local or state government. Business owners who said their city had a “great” website ranked their cities 13 percent higher, while there was no difference in the rankings of business owners who were either unaware of or had had a bad experience on city websites.

Thumbtack surveyed 17,633 small businesses across the United States. The 36-question survey asked about the friendliness of states and cities toward small business, including specific questions about the regulatory environment for labor, tax, and licensing rules.

Thumbtack is a technology-based marketplace that connects Americans with experienced local professionals to help them accomplish more than 5 million personal projects each year. More than 150,000 small business professionals actively use Thumbtack each quarter, across nearly a thousand categories including house remodeling, event planning, and music lessons. Founded in 2009 and headquartered in San Francisco, Thumbtack has raised a total of $150 million from Sequoia Capital, Tiger Global Management, Javelin Investment Partners, and Google Capital.