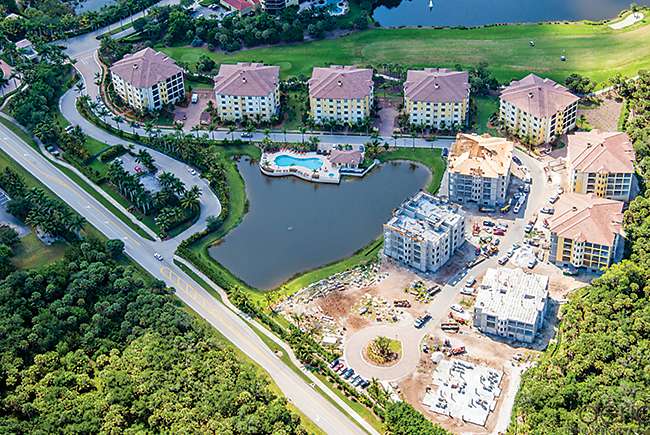 WCI's Cielo neighborhood at Colony & Bay Club in Bonita Springs will have 96 residences.

A surge in retired buyers is boosting WCI's sales and profit.

It’s been a long road back for WCI Communities, once one of Florida’s most prominent home builders. In 2008, the company filed for Chapter 11 bankruptcy protection after an expensive foray into condo development left it with debt it couldn’t repay when the market tanked.

The company, based in Bonita Springs, reorganized, went private and slowly resumed building along Florida’s southwest coast after emerging from bankruptcy in 2009. It went public again in 2013, raising $102 million that it used to buy and develop land.

Today, WCI is building and marketing homes in 45 neighborhoods in 16 master-planned communities. Tony Polito, a market analyst with Metro study in Tampa, says WCI is benefiting from a surge in retiree buyers. “Look at the number of Baby Boomers who are finally retiring,” he says. “We’re starting to get retirees coming into the marketplace.”

Keith Bass, WCI’s CEO, is bullish on the housing market. He notes that Florida ranked No. 2 in the U.S. for residential permit activity in 2014 and has remained well above the national growth rate in 2015.

Even with that improvement, he says, there’s plenty of upside. “Permits are still about 70% below peak levels and 37% below the 20-year average. We’re really just at the beginning of the recovery in Florida.”

Bass, who became CEO three years ago after running the southeastern U.S. operations for Ryland Homes, says WCI has an “enviable” customer base of retirement, “move-up” and second-home buyers: Nearly half pay all cash for their homes, and only 6% finance more than 80% of the value.

During the first three months of this year, WCI sold 138 homes at an average price of $486,000, up 19% from last year. The company spent $22.5 million on land acquisition and development costs and began construction on 264 homes.

Meanwhile, the company’s quarterly profit more than tripled to $6 million, up from $1.7 million a year ago.

BRADENTON — Suncoast Brace and Limb pleaded guilty to defrauding the U.S. Department of Health and Human Services out of $1.5 million by submitting Medicaid and Medicare claims for prosthetic devices that were never delivered, according to a plea agreement with U.S. Attorney A.Lee Bentley III.

LAND O’ LAKES — Ford’s Garage plans to open a 7,500-sq.-ft. restaurant at a proposed shopping center near State Road 56 and I-75. The chain opened its first restaurant in Fort Myers in 2012 and now has locations in Cape Coral, Estero and Brandon.

ST. PETE BEACH — The Carlyle Group, which bought the Postcard Inn for $32.5 million in February, plans to spend $6 million renovating the 196-room hotel.

TAMPA — The Tam pa Bay Export Alliance will lead a trade mission to Toronto in October to promote local exports to Canada. > USF ranked first in Florida and 10th nationwide in the number of patents it received in 2014, according to a report by the National Academy of Inventors and the Intellectual Property Owners Association. USF secured 104 patents, up from 95 in 2013. > New Yorkbased RD Management will give University Mall near USF a major facelift, with new anchor tenants, restaurants, landscaping and seating areas. RD Management bought the 41-year-old mall last December. > USF will get $17 million from the state to move its medical school downtown. Centennial Bank’s corporate parent, Home BancShares, bought Tampa-based Bay Cities Bank in a cash and stock deal worth $101.6 million. McKibbon Hotel Group began construction on a 178-room Hampton Inn & Suites near Tampa International Airport in the West Shore district.