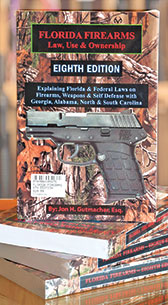 When attorney Jon H. Gutmacher was 8, his father gave him a gun. Gutmacher wasn't allowed to fire it ( just to be sure, he didn't have access to ammunition) but the .45-caliber revolver made a big impression. Today, he's among the state's top legal experts on gun and self-defense laws. In 1993, he wrote "Florida Firearms — Law, Use & Ownership," an authoritative text about all things weapons. The book, in the process of being updated, is now in its eighth edition. He spoke about recent developments in state gun laws, as well as his eclectic interests, including fashion and fantasy poetry.

» Legislation: In May, Gov. Rick Scott signed into law a bill that allows gun owners, whether or not they have a concealed weapons permit, to carry concealed weapons or firearms in public during a mandatory evacuation order in the case of a declared state of emergency.

"You had to leave your weapons at home if you wanted to obey the law," he says. "The Legislature fixed that, but unfortunately the session ended early. There was a lot of other stuff that might have been passed that will now have to wait until next year." Those proposals expected to return include the campus carry bill, which would allow concealed weapons on college campuses, and another bill that would allow some public-school employees and school volunteers to be armed.

» Shooting: That pistol he got when he was 8 was just the beginning. At his first legal job, working as a law clerk in the Union County, N.J., prosecutor's office, he'd frequently go with his boss to a gun range and practice shooting, an activity he still enjoys today.

"I normally go shoot maybe 30 to 50 rounds," he says. "I've shot a lot of different firearms, everything from several different kinds of machine guns, shot guns, handguns, assault weapons if you can call them that. You name it, I've shot it, and I like them all."

» Fashion: Gutmacher's parents and numerous family members were in the apparel business. Although he says he always wanted to be a lawyer, Gutmacher assumed he'd end up working in the fashion industry like so many others in his family.

"I worked for Gimbels for a little while as an assistant buyer in women's sportswear," he says. "I loved and still love the fashion industry. I love looking at Vogue. I would be the first guy to volunteer to go to a fashion show and watch them come down the runway. I think it's fascinating. I really do."

» Outlet: In 2010, Gutmacher endured four months of "horrible pain" following rotator cuff surgery. "When I finally got over that situation, it changed my perspective on life and I started writing poetry," he says.

Now he has his own website featuring what he calls "fantasy poetry" — basically poems set in non-existent worlds. Some of the titles include "Tasmerelda," "The Legend of Evermore," "Dwarf King" and "The Seven Moons of Dargoor."

"Most of my poems tell an entire story," he says. "I write a lot of it, but I only write when I have a need to write. There will be times when I write two or three a day."