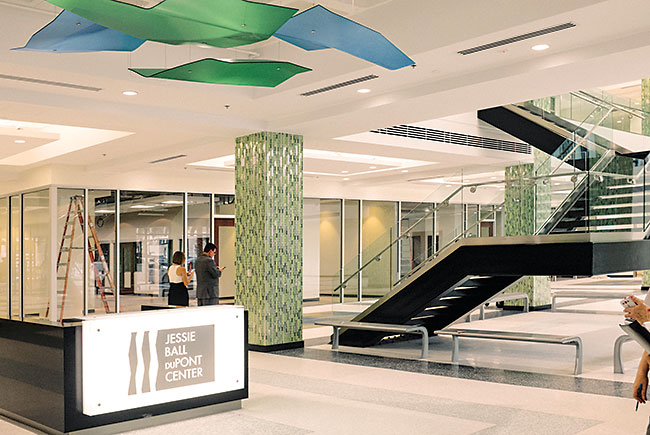 The old Haydon Burns Library has become a hub for charities and non-profits.

Still giving: The DuPont fund steps up its support efforts

The DuPont fund steps up its support efforts.

Before Jessie Ball duPont died in 1970, she left explicit instructions on how to use her $42-million estate — the money, she said, should continue her lifelong support for 330 educational, religious and community-building organizations, ranging from local homeless shelters to the University of Notre Dame and Yale University. Some 100 of those organizations are in Florida.

Since 2000, the Jesse Ball Du- Pont Fund has been headed by Sherry Magill, who has emerged as a leader among the state's philanthropy executives.

Magill, who joined the fund in 1991 as program officer and was named executive director in 1993, chairs the national Council on Foundations and is a member of the board of the Delores Barr Weaver Policy Center. She also is a co-founder of the Florida Philanthropic Network.

Under Magill, the fund stepped up its support for its beneficiaries during the recession. In 2008, it increased its annual payout from 5% to 6% for three years. In addition, trustees invested an additional $1.6 million to help provide "a safety net" to support organizations providing food, shelter, rent and utility help. Under Internal Revenue Service rules, the fund must donate at least 5% of its assets a year in grants.

Magill says she's proud of the fund's work locally in areas such as studying and addressing the issue of affordable housing in Jacksonville. The fund has also been involved in helping increase access to higher education, energy conservation, public policy, health care and youth activities.

"We play in that space between for-profit business and government, and our purpose is to serve the common good," says Magill.

In 2013, the fund made its first real estate venture. It purchased and renovated the former Haydon Burns Library building in downtown Jacksonville for $25 million, converting the building into a hub for charities and non-profits. So far, 14 non-profits have signed leases for offices in the fourstory building.

"I think philanthropy is greatest at the local level. We have enormous promise and the opportunity to bring folks together," Magill says.

JACKSONVILLE — A three-person committee that evaluated three proposals to redevelop the city's riverfront Shipyards property gave the highest score to a plan from Jacksonville Jaguars owner Shad Khan. His plan, submitted by Iguana Investments Florida, includes $500 million worth of investment in residential, commercial and public space. » Controversial advertisements on Jacksonville's Veterans Memorial Arena violate both state and local laws and must be removed, says Jacksonville General Counsel Jason Gabriel. The signs, which show three principal attorneys for the law firm of Hunt, Green and James, violate a city ordinance that prohibits off-site commercial advertising and state law that prohibits commercial signs near state highways. » Baptist Health and the University of Texas MD Anderson Cancer Center plan to create a joint cancer program in a building Baptist expects to open in 2017. » The opening of a $30-million proton therapy facility by oncologist Scot Ackerman makes Jacksonville the first city in the country with two proton therapy centers. The other is the UF Proton Therapy. The Ackerman Cancer Center is the only proton therapy center among 15 in the country affiliated with a private medical practice. » Nestle USA will shift a majority of its United States-to-Puerto Rico shipments from the Port of New York and New Jersey to JaxPort. Safariland Group, which provides safety and survivability products for law enforcement, military, professional and outdoor markets, plans to upgrade its local facilities and hire more employees. » The North Florida Land Trust is buying 645 acres on Big Talbot Island from CSX for $154,000. Jim Mc- Carthy, the non-profit's executive director, says the purchase gives the trust about 99% of the land on the island. Just 34 acres remain in private hands, including 12 acres occupied by Beaks, a bird sanctuary. » The U.S. Army Corps of Engineers has awarded $39.5 million to a Seattle company to improve navigation in the St. Johns River in the Mile Point area, where the St. Johns River and the Intracoastal Waterway intersect. » APR Energy, which builds power plants, has withdrawn from operating in Libya and Yemen. The withdrawal from Libya resulted in a $717.4 million write-off, resulting in an operating loss of $702.5 million and a net loss of $750.6 million, or $7.96 a share. » Atlanta-based design firm Wakefield Beasley & Associates, which has an office in Ponte Vedra, has been awarded a contract to plan the redevelopment of Jacksonville Landing. » Johnson & Johnson Vision Care is proposing a $301-million expansion in Jacksonville and will add 100 jobs at its plant, which makes disposable contact lenses. The company, previously known as Vistakon, says it needs about $98.6 million in city and state incentives or will expand in Ireland. » Jacksonville's One Spark 2015 crowdfunding festival raised $104,095 over six days in April that drew about 320,500 people downtown.

ST. AUGUSTINE — The St. Augustine Alligator Farm Zoological Park has been accredited by the Association of Zoos & Aquariums. Open since 1893, it was designated a U.S. Historic District in 1992.

InMotion Entertainment, based in Jacksonville, calls itself "the largest U.S. airport retailer of entertainment and electronics." It sells headphones, tablets, digital cameras and other electronics at 122 locations in 45 airports and plans to acquire about 30 more in about 15 airports. Atlanta's Hartsfield-Jackson International Airport alone has 17 InMotion stores.

The business began 18 years ago in Jacksonville renting DVD players and movies to airline passengers and morphed into an electronics retailer. Jeremy Smith, CEO and president, has headed the company since 2006.

Geared primarily to business travelers, InMotion saw a 19% increase in sales from 2013 to 2014, compared to industrywide growth of just over 3%. The company expects $135 million in sales in 2015.

InMotion employs 40 in Jacksonville and 650 throughout the company.

» Jacob Gordon has been hired as executive director of jacksonville's Downtown Vision Inc., a business improvement district. He replaces Terry Lorrince, who retired.

» Laura Ann Rosenbury has been named dean of UF's Levin College of Law. She has taught at Washington University School of Law in St. Louis since 2002.