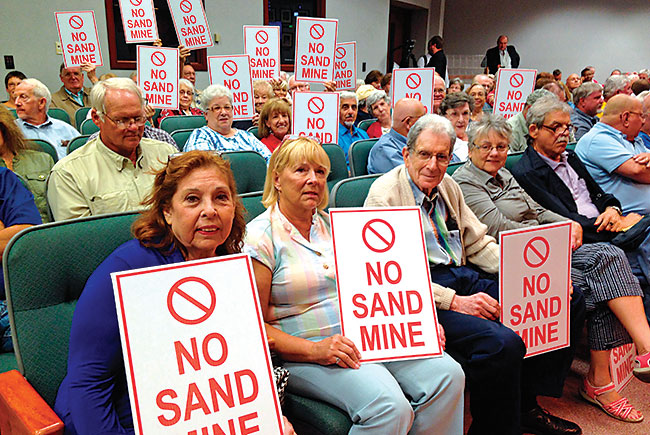 In late March, commissioners in Orange County voted unanimously to prohibit trucks from traveling on a 3,200-foot stretch of rural road at the county's western border.

A few hours later, commissioners in neighboring Lake County, based in part on Orange County's trucking restriction, voted to deny an application submitted by concrete-manufacturer Cemex USA to establish a sand-mining operation on 600 acres of formerly agricultural land near the Lake-Orange border. Cemex had planned to use the road in Orange County to access the sand mine in Lake County.

Now Cemex is suing to have Lake County's decision overturned. One of its chief arguments is that both Orange County's trucking ban and Lake County's reliance on it were illegal.

Cemex says in court filings that Orange County "ambushed" it, noting that the prohibition applies to only a tiny stretch of one road and impacts only Cemex. "Clearly the designation of this limited segment of road at the county line is arbitrary on its face and meant to hinder the free flow of commerce … for the sole purpose of defeating the lawful use of property in another county," Cemex says.

At the center of the conflict is Kurt Ardaman, an attorney with the Winter Park firm Fishback Dominick. Ardaman represents six landowners in Lake County who oppose the Cemex mine. He was also a top fundraiser for Orange County Mayor Teresa Jacobs, who controls the county commission's agenda.

Ardaman says he spoke to Jacobs and most other Orange commissioners to make them aware of the potential problems with Cemex's proposal. "I was protecting all my clients' interests — and the community's, really," he says.

The two counties have different reasons for trying to block Cemex. Lake County leaders hope to transform that part of their county into a health-and-wellness hub and view a sand mine as incompatible with that vision. Orange County officials say they worry about truck traffic impacting nearby Horizon West, a community of about 14,000 residents.

CENTRAL FLORIDA — Four veteran executives at the St. Johns River Water Management District resigned within days of one another. The group, which has nearly 90 years of combined experience at the agency, included chief of staff Jeff Cole, division directors Robert Christianson and Hal Wilkening and assistant division director Thomas Bartol. Mike Register, the district's acting executive director who stepped into the top position days before the resignations, declined to discuss the exodus.

LAKE COUNTY — The county school district became one of the first in Florida to eliminate end-of-course exams under a new state law passed this spring.

ORANGE COUNTY — The University of Central Florida established the Center for Applied Biomedical Additive Manufacturing, or CABAM, an interdisciplinary research facility and marketplace focused on biomedical developments such as 3-D printed prosthetics. SeaWorld Orlando plans to open a 200-foot roller coaster next year that will be the highest, longest and fastest in Orlando.

ORLANDO — Universal Orlando plans to open a large attraction based on the "King Kong" franchise next year. The company also says it plans a "very significant" hotel build-out in Orlando over the next five or so years. Meanwhile, parent company Universal Parks & Resorts struck a deal to develop theme park attractions based on Nintendo video games. DeBartolo Development sold the 310-unit Gallery at Mills Park apartment complex to an institutional investor for $66.5 million. JLL Capital Markets, which represented DeBartolo, called the $215,000-perunit sales price a new high for Orlando's multifamily market this cycle. The Orlando Police Department plans to add 450 body cameras to the uniforms of patrol officers over the next four years. » Kavaliro, an Orlando-based staffing and services company, bought California-based Hynes & Co. In a deal that will see Kavaliro grow by nearly $7 million in annual sales and 545 employees. » The Orlando Sentinel launched a new digital business-news publication called "GrowthSpotter," a paid-subscription service anchored by a daily email newsletter. The Sentinel also plans to begin publishing a monthly lifestyle magazine called Orlando Signature in July. Gatorland opened an off-site attraction called "Gator Spot" at the Fun Spot America amusement park. » The city moved its municipal elections from April 2016 to November of this year in order to avoid the same ballot as Florida's 2016 presidential primary election. Orlando-based Seaside National Bank & Trust bought insurance and group-benefits company Vaughn Group. Financial terms were not disclosed. Orlando Bike Share, which began a bike-rental service in downtown Orlando earlier this year, changed its name to Juice Bike Share, raised both hourly fees and the monthly membership price and began selling annual passes. » Orlando Gateway Village, a mixed-use development near Orlando International Airport, filed for Chapter 11 bankruptcy. Florida Hospital and the University of Central Florida's College of Medicine announced a partnership to provide primary care and other medical services at a new facility in Lake Nona. » With Gov. Rick Scott and daredevil Nik Wallenda on hand, the 500-foot Orlando Eye observation wheel opened along the International Drive tourist strip. » Restaurant operator Ruby Tuesday will open a regional administrative office in Orlando. Weekly flights between Orlando and Havana, Cuba, will begin in July.

OSCEOLA COUNTY — Commissioners voted to cancel a contract with Colt Manufacturing after the gun maker failed to follow through on a deal to establish a regional headquarters in the area.

SEMINOLE COUNTY — Commissioners approved a $1.7-million incentive package for Deloitte Consulting, which has opened a new operation in Lake Mary.

WINTER PARK — UniKey, a young company that developed locks that can be unlocked remotely, announced that it has received $10 million in venture capital funding.

SunRail, the new commuter-rail system in central Florida, marked its first anniversary May 1 by distributing free coffee and doughnuts to riders — and then winning a $93-million grant from the federal government to extend service into Osceola County. The Osceola County extension will add four stations, including stops near the headquarters of Tupperware and in downtown Kissimmee. The Florida Department of Transportation, meanwhile, added nearly $10 million to its work program to help pay for a new parking garage serving the Kissimmee SunRail station. SunRail officials say they are still working to secure federal grants to extend the north end of the service farther into Volusia County.

» Florida Hospital hired David Christian as executive director of government relations. He had been a vice president of government affairs for the Florida Chamber of Commerce.