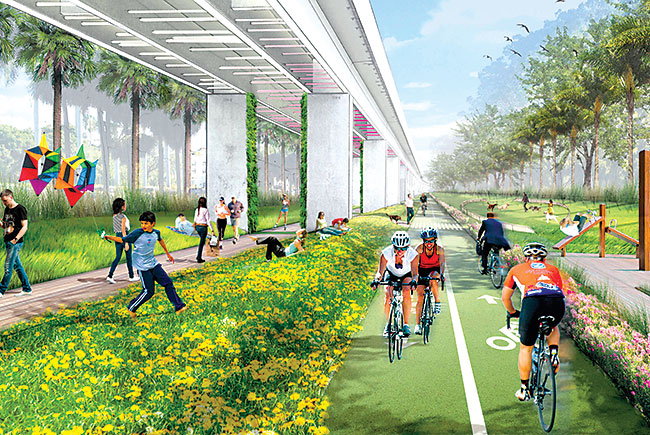 A group in Miami is pushing for a 10-mile park under the Metrorail line.

A Miami effort hopes to mimic the success of Manhattan's linear park.

In 2006, New York City began converting an abandoned 1.45-mile section of elevated railroad track on the west side of Manhattan into a linear park called the High Line. Today, the park gets more than 5 million visitors a year.

In Miami, a non-profit group is pushing the idea of a 10-mile linear park underneath the Metrorail elevated mass transit tracks from the Miami River south to Dadeland. Called the Miami Underline, the park would include bike and walking paths, landscaping and connections to other transit and parks. Miami-Dade Transit owns all the land under the proposed Underline, including a poorly lit, poorly landscaped space called M-Path.

The non-profit Friends of the Underline is leading the effort, which has gained the backing of the county's transit and parks departments, as well as Mayor Carlos Gimenez, who wrote in a Miami Herald guest column that it would "be the largest urban trail directly connected to transit in the country."

In 2014, University of Miami School of Architecture students created a concept design for the Underline, and UM School of Business students conducted an economic impact study on the potential for commercial development related to the park around two Metrorail stations.

Friends of the Underline hired James Corner Field Operations, the New York firm that co-designed the High Line, to draw up a master plan for the concept. The cities of Miami, South Miami and Coral Gables, plus the Knight Foundation, Miami Foundation, Health Foundation of South Florida and the Mitchell Wolfson Foundation are footing the $500,000 bill for the plan, which should be delivered in September.

Friends of the Underline will seek private and public funding to build and maintain the park.

HIALEAH — Gerard Keating, the largest landowner in the area around the Hialeah Market Tri- Rail station, proposed a community of homes and commercial buildings around the station, as well as the formation of a community redevelopment agency.

MIAMI-DADE — Florida International University's School of International and Public Affairs received a $20-million gift from Ambassador Steven J. Green, his family and the Green Family Foundation. FIU renamed the school after Steven Green. » Miami City Self Storage plans to build six self-storage facilities around the county. » More than 400,000 county residents enrolled in health insurance through the Affordable Care Act during the recent signup period — more than any other county in the state and more than 43 states.

NORTH MIAMI BEACH — The city has changed its zoning code to allow for greater density in certain areas and to require ground-floor retail and active street uses. The city is also offering incentives for developers. North Lauderdale-based Grand Island Square paid $21.5 million to purchase the two Grand Island Place apartment buildings, which have a total of 259 units.

SURFSIDE — Israel-based ASRR Capital and Istanbul-based Suzer Group have a deal to purchase a nearly one-acre, 41-unit oceanfront condominium for $40 million. They plan to redevelop the project into a high-end hotel and condos.

CareCloud hired Ken Comée as CEO, replacing founder Alberto Santalo, who becomes the company's chairman and chief strategy officer. Comée is a longtime board member and adviser to the company.