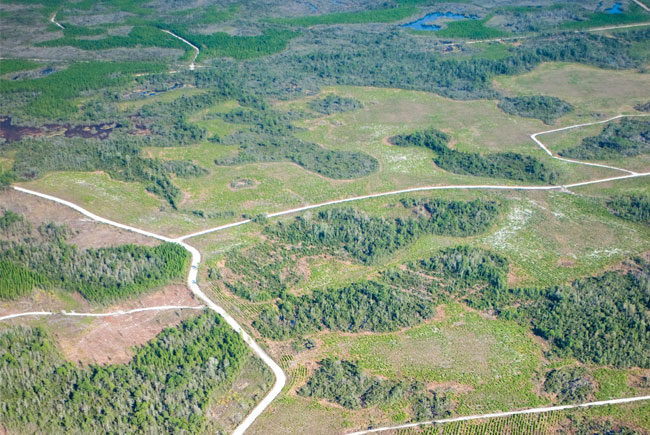 The law includes a provision that allows Foley Timber & Land to apply early for a consumptive-use water permit for a master-planned DRI that it has mapped out for 128,000 acres in Taylor County.

Major developments will instead go through a more rapid state-led review process.

For most of the last 40 years, developers in Florida who wanted to build large-scale projects have been governed by the state's "development of regional impact" law.

The DRI process was meant to ensure that state and regional governments collaborated to review big housing subdivisions, major shopping malls and other projects whose traffic and environmental impacts extended beyond the border of a single city or county. Over time, the DRI law fell out of favor with developers, who saw it as time-consuming and expensive, and also with environmentalists, who found it loophole-ridden and ineffective.

Now it is no more. Days before the Legislature's regular 2015 session crashed to an early halt in April over Medicaid expansion, lawmakers voted on a bill aimed at eliminating new DRIs. After heavy deal-making, the language that ended the DRI breezed through its final votes as part of a larger growth-management package. The final product, known as SB 1216, was part of a legislative "train," one of the few to leave the station before House Speaker Steve Crisafulli gaveled his chamber to an early close.

In the future, big developments that once had to navigate the multigovernment DRI process will instead go through a faster, possibly less stringent, state-led review.

"This is a huge change — there will be no project ever again subject to a DRI review," says Gary Hunter, a lobbyist with Hopping Green & Sams, which represents several of Florida's largest landowners and is the leading lobbying firm in Tallahassee on matters involving land-use and environmental law. "It's taken a long time to get to that point."

In some respects, the decision to end the DRI process is the capstone to a more controversial growth-management bill the Legislature passed in 2011. That legislation, known as SB 360, exempted large urban areas around the state from DRI reviews. The eight counties and more than 240 cities excluded from the process together represented about half of the state's population (though a far smaller share of the state's total land area). And even before that exemption, lawmakers had been steadily carving holes in the process for years, exempting everything from hotels and marinas to petroleum-storage facilities.

Some developers had responded to the DRI requirements by dividing large projects into smaller ones that would fall beneath the DRI thresholds and wouldn't trigger the DRI review process, which routinely took nine months or longer.

"I think by eliminating the DRI process, you now will have better growth because you won't have people skirting the DRI threshold, where you now have four of these smaller projects sitting there instead of one large, well-planned neighborhood," says Sen. Wilton Simpson (R-Trilby), who sponsored the growth-management package in the Senate.

Environmental groups opted not to oppose the elimination but warn that getting rid of DRIs will have consequences. The replacement process, known as the "state coordinated review," will be overseen by the Department of Economic Opportunity, an agency whose primary focus is economic development rather than growth management.

That will mean less rigorous scrutiny of developments, from wildlife surveys to traffic count analyses, says Charles Pattison, a lobbyist for 1000 Friends of Florida.

"That's something we're going to monitor and make sure that it isn't abused," he says.

Beyond ending the DRI, SB 1216 included other measures advocated by big landowners and developers:

» The legislation changes Florida's "sector plan" program, which governs long-term development plans for enormous tracts of land — 15,000 acres or more. One change, designed to get developers to commit to conservation easements sooner, allows them to use land placed under easements to meet wetlands mitigation requirements that may be imposed later as they develop other portions of their property. Other changes allow them to use less-expensive aerial photography, rather than detailed land surveys, to map proposed easements and ensure that they can amend the boundaries of those easements down the line if necessary.

Those changes were pushed by the Deseret Ranch, which is working on a sector plan with Osceola County for 133,000 acres of its land in central Florida. A detailed land survey of that massive property might have cost more than $1 million, according to some estimates. "We appreciate how those clarifications inform and improve the sector-planning process," says Erik Jacobsen, general manager of Deseret Ranches.

» Another section allows Foley Timber & Land to apply early for a consumptive-use water permit for a master-planned development that it has mapped out for 128,000 acres in Taylor County. Though Foley does not expect widespread development on its north Florida tract for years, obtaining a permit now will ensure water is available when that time comes. The state also allows developers of sector plans to apply early for water permits.

As a bonus, securing long-term water rights should help elevate the value of the land, which Foley has put on the market. Taff says the decision to seek the legislation was made before Foley's board decided to sell.

» A different part of the bill will allow Pasco County to designate a "connected-city corridor" that features less state growth-management oversight. The county could change its comprehensive plan more quickly and approve much larger community development districts within the corridor.

The concept originated at Metro Development Group, a Tampa-based developer that has begun building high-tech communities equipped with ultrafast internet service from Bright House. Metro Development and Pasco County officials are planning a 7,000-acre corridor around the intersection of I-75 and State Road 52, a tract that includes Metro's nearly 2,000-acre Epperson Ranch.

» Yet another provision, added late in the process, would exempt tiny Miami Lakes, and potentially a few other small cities in Miami- Dade County that do not operate their own water systems, from a state law requiring them to update their water-supply plans every few years.

Brandon Schaad, the town planner in Miami Lakes, says the updates are an unnecessary bureaucratic exercise that can cost the town a week's worth of employee hours or tens of thousands of dollars in consultant costs. Miami Lakes had an influential ally: Republican Rep. Jose Oliva, who is in line to become Speaker of the House in a few years and who happens to live in Miami Lakes.