A state of incarceration: Florida crime & corrections data over time

As Florida's crime rate has fallen, its incarceration rate has climbed

With Florida's crime rate at its lowest point in nearly five decades, the latest report from the state's nonpartisan, nonprofit government watchdog group, Florida TaxWatch, recommends policy improvements to reduce cost and improve the efficacy of the criminal justice system. The data from the report show the contrast between Florida's falling crime rate and rising prison population. The ballooning prison population has resulted in a 300 percent increase in corrections spending, which now totals $2.2 billion.

"It is clear that tough-on-crime policies are not working for Florida, as our state's crime rate is still 15 percent higher than the national average, even while crime rates across the nation continue to fall," said Robert Weissert, Senior Vice President of Research at Florida TaxWatch, the independent, nonpartisan, nonprofit taxpayer research institute and government watchdog.

The full Florida TaxWatch report is available in PDF format: 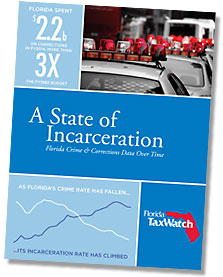 Since 1980, Florida's inmate population has increased steadily by an average of five percent each year, much faster than the population growth that has averaged two percent annually. The state's incarcerated population is five times larger than it was two and a half decades ago, making Florida 11th in the nation for per capita incarcerations.

The report also makes recommendations to improve the corrections system while minimizing expenditures. Options for reform include policies designed to keep low-level, nonviolent offenders out of expensive state prisons, such as the use of civil citations, electronic monitoring, and greater judicial discretion in sentencing. Other policies would reduce the costs associated with recidivism and reduce the likelihood of inmates returning to prison after release, including conditional early release for elderly or infirm inmates, and reentry programs to help former inmates assimilate back into society.

"This year, the Florida Legislature and the Florida Department of Corrections are working together to incorporate some of our recommendations in a new corrections framework for Florida," added Weissert. "The Legislature expects to pass a prison reform package, championed by Senator Greg Evers and Representative Carlos Trujillo, that will open the door to taxpayer savings by allowing infirmed prisoners to leave the costly corrections system, and will facilitate data collection to make informed decisions about the elderly prison population. Lawmakers are also considering a bill by Senator Garcia and Representative Clarke-Reed that will expand the use of juvenile civil citations, ensuring fewer young Floridians are exposed to the criminal justice system for nonviolent misdemeanor crimes. Others have proposed similar Florida TaxWatch recommendations, such as Representative Katie Edwards, whose proposal to reduce the number of elderly, non-threatening inmates in state prisons could save taxpayers up to $40 million. We look forward to working with these lawmakers who have committed themselves to improving the state's criminal justice system in the future."