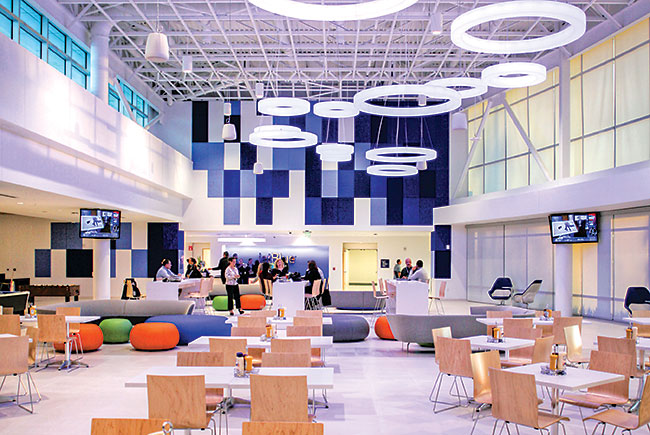 There are hotels of all shapes and sizes in central Florida, targeting everyone from sales reps from Omaha to families from Brasilia. But Orlando’s newest hotel may have the narrowest niche yet.

In March, JetBlue Airways opened “The Lodge,” a $37-million hotel built on property owned by Orlando International Airport. Operated by Bostonbased Pyramid Hotel Group, the four-story, 196-room hotel will serve as a high-end dorm for more than 7,000 crew members who spend time training each year at the airline’s adjacent “JetBlue University.”

Modeled after Starwood Hotels & Resorts’ “aloft” chain of urban hotels, the Lodge has sleek furniture and bold colors. But it is open only to JetBlue employees. The airline says it sends about 400 new hires each month to Orlando to train at its campus, in addition to occasional recurrent training for pilots and in-flight crew.

First announced nearly a decade ago, the airline twice put the project on hold when it couldn’t make the economics work. But the company resurrected the project when planners stopped pitching it as a cost-savings device and instead began thinking of it as a communal space that would help further steep trainees in the company’s offbeat culture, says Rob Bertlesman, manager of corporate real estate for JetBlue and the Lodge’s project manager.

As a result, the Lodge emphasizes collaboration. Rooms are deliberately small to encourage trainees to spend more time in the hotel’s public spaces. The airy lobby includes open meeting space and games, such as foosball (former CEO Dave Barger insisted) and shuffleboard (ordered by new CEO Robin Hayes). There’s also a kitchen serving made-to-order meals and a bar selling Starbucks in the morning and cocktails at night — priced high enough to discourage overindulging but low enough to keep employees from seeking out cheaper drinks off campus.

JetBlue executives say they studied similar facilities when designing the Lodge, including a Lufthansa training and conference center in Seeheim, Germany, and Deloitte University in Westlake, Texas.

JetBlue, which had been booking trainees into various hotels around Orlando International Airport, says it will spend an extra $1 million a year by housing them at the Lodge. But executives say they expect to realize a return on investment in the long run, as employee-satisfaction scores improve — happier employees, they say, lead to happier customers and more repeat business.

Walt Disney appointed Bob Chapek chairman of Walt Disney Parks and Resorts. Chapek, who will be based in Burbank, Calif., previously ran Disney’s smaller consumerproducts division. He succeeds Tom Staggs, who had been Disney’s parks chief in 2009 but was named the company’s COO in February.

Rollins College named Grant Cornwell its 15th president. Cornwell, who had been president of the College of Wooster in Ohio, succeeds Lewis Duncan, who resigned last year.

BREVARD COUNTY — For the first time, six cruise ships docked at Port Canaveral in a single day, marking a new milestone in the seaport’s growth.

LAKE BUENA VISTA — Walt Disney World raised the price of a one-day ticket to the Magic Kingdom to $105 from $99, becoming the first of Orlando’s major theme park operators to cross the $100 threshold. Disney raised single-day prices to its other three theme parks to $97 from $95. Universal Orlando quickly followed, raising oneday prices to each of its two theme parks to $102. > The Richard Petty Driving Experience at Disney World will close in June after Disney decided not to extend an agreement with the attraction’s owner.

ORANGE COUNTY — Annual sales at Orlando-based Sea- World Entertainment fell from $1.46 billion to $1.38 billion in 2014, while profit shrank from $51.9 million to $49.9 million. The company launched a broad marketing campaign aimed at counteracting criticism of its treatment of captive killer whales.

OSCEOLA COUNTY — Commissioners voted to issue up to $67.5 million in debt to help finance construction of the Florida Advanced Manufacturing Research Center, a 100,000-sq.-ft. facility that would develop smart sensors. The project, which will cost $270 million, is scheduled to open next year. > Jacksonville-based Xero Gravity Action Sports plans to build a $309-million resort centered on action sports. The resort would include a 250-room hotel, an indoor and outdoor skateboard park, a BMX bikeracing course and two skydiving pods. The developer is aiming for a 2018 opening. > After more than three decades at Osceola County Stadium in Kissimmee, the Houston Astros will move their spring training to a new facility in Palm Beach County beginning in 2017. The Astros will share the facility with the Washington Nationals, who will leave Space Coast Stadium in Brevard County.

WINTER SPRINGS — IT services company Genesis10 plans to hire as many as 160 employees for a new consulting services center.

Adventist Health System plans to move Florida Hospital Apopka from a 40-year-old building downtown to 33 acres of undeveloped land well outside the city. And city leaders, who have struggled to attract desirable businesses to their community, want to use the $180-million project as the anchor of a new identity. So the Apopka City Council in February imposed a moratorium on any land-use or zoning changes near the 2,500 acres surrounding the new hospital site in hopes of ensuring the area isn’t immediately overrun with low-end retail development. The moratorium runs through Oct. 31.