Greater oversight and additional measures to improve the accountability of the government agency responsible for providing cost-effective electricity to more than two million Floridians are needed, according to a new report from the independent watchdog institute, Florida TaxWatch.

"Cities participating in the Florida Municipal Power Agency expect competitively priced power for their residents, but due to lack of competition and questionable business practices, many ratepayers have been left out in the cold," said Robert E. Weissert, Esq.,Senior Vice President of Research and General Counsel of Florida TaxWatch, the independent nonpartisan, nonprofit public policy research institute and government watchdog. "The concern over higher rates is causing FMPA members to test the market in search of lower rates; however, exit provisions in the FMPA contracts are preventing them from securing the best rates and the best services that meet their needs."

The full Florida TaxWatch report is available in PDF format: 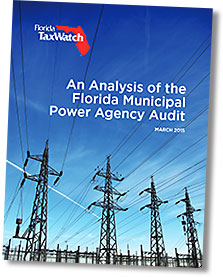 The FMPA runs a 30-year, annually renewing contract with participating municipalities that can only be terminated at the discretion of the agency itself, and the TaxWatch analysis found that arduous exit provisions are preventing some cities from withdrawing their membership.

The report analyzed a recent operational audit of the Florida Municipal Power Agency conducted by the Office of the Auditor General. The Auditor General determined that the reduced demand for energy, coupled with increased fixed costs, has resulted in increased billing rates for FMPA members. Florida TaxWatch found that, over the last 10 fiscal years, the demand for FMPA power had decreased 17 percent and FMPA's all-inclusive billing rates had increased 33 percent.

The Auditor General credited higher power rates to poor financial management and investment practices, partially attributed to a lack of oversight and accountability within the agency. The FMPA has incurred millions of dollars in losses and runs the risk of millions of dollars in future losses, which will be passed onto ratepayers, but only one of the six officers setting rates and approving business decisions is elected.

"Powerful individuals who do not answer directly to Florida voters are making unchecked decisions about what is best for the public, and the impact of the lack of oversight and accountability has resulted in questionable decisions, leaving ratepayers on the hook for the tab," added Weissert.

The report includes several recommendations to ensure FMPA member municipalities receive cost-effective power, including requiring the agency to complete a specific and measurable corrective action plan, changing the makeup of the agency's board to include only elected officials, clarifying the severance provisions in the contracts, and establishing a schedule of periodic audits by the Office of the Auditor General and a review of the need for the FMPA by the Legislature's research division, the Office of Program Policy Analysis and Government Accountability.