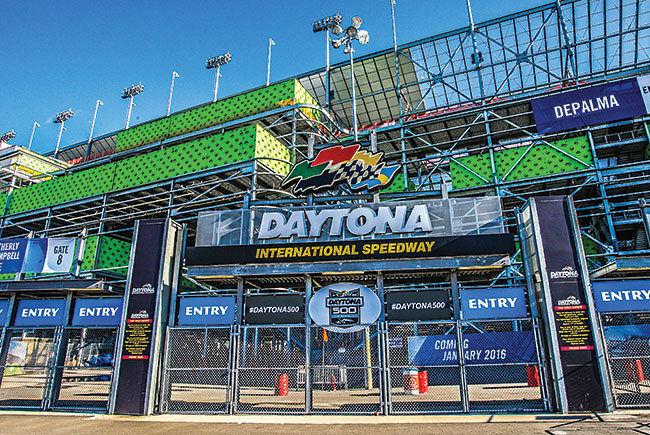 Racing to a rebound

Racing: The $400-million makeover of the iconic Daytona International Speedway wowed visitors early this year with the unveiling of the fi rst phase of the project, which is proceeding toward completion in early 2016. The renovated setting for the Daytona 500 stock car race and other races and events will boast more than 100,000 permanent seats with extra legroom, 60 luxury suites with track-side views, 40 escalators, 16 elevators, twice as many restrooms and triple the number of concession areas.

Tourism: Hotel and motel renovations and construction of major hotel/condos are moving from the drawing boards to bricks and mortar this year. After numerous delays that raised questions about its viability, a massive $130-million hotel/condo project is expected to start site work this year on oceanfront property in Daytona Beach where the SeaSide Inn once stood. Construction is forecast to be the fastest-growing sector for job growth in the Deltona-Daytona Beach-Ormond Beach metro area, growing at more than 8% a year for the next several years, according to the University of Central Florida's Institute for Economic Competitiveness. Even so, Volusia's overall job growth and other economic indicators are projected to remain weak, with average wages the lowest among all of the state's major metro regions.

Real Estate: Volusia County home values rose nearly 10% in 2014, and Zillow real estate firm forecasts them to rise another 3.2% countywide this year, continuing a rebound in one of the hardest-hit segments of the regional economy. Foreclosures during the year fell to the lowest level in eight years, though the Daytona Beach metro area still has too many homes valued at less than is owed on the properties. Zillow says the 12% of mortgages still delinquent at the end of 2014 was nearly double the national average. With sales up, home loan rates remaining low, and the local job market strengthening, however, the rebound in the residential real estate market has a chance to continue its surge.

Trader Joe's: The trendy retail grocer from California is making a major push into Florida, building a 630,000-sq.-ft. distribution center off I-95 in the Gateway Business Center just west of Daytona Beach. The $88-million project will bring a badly needed boost to local employment as well, creating as many as 450 jobs with an annual payroll of more than $12 million.

Growth Companies: Major high-tech and space companies in Brevard are strong, including Harris Corp., Rockwell Collins and Northrop Grumman, with a combined local work force of about 9,000. But smaller, second-stage businesses with growth potential are on the rise. Firms such as Anuva Manufacturing Services in West Melbourne, SeaDek Marine Products in Rockledge and AML Superconductivity and Magnetics in Palm Bay. AML, for example, a high-tech design and manufacturing firm, has been in business for 20 years but now is reaping significant contracts and joint venture deals for its work, notably for offshore wind turbine generators and advanced magnets for high-energy physics and medicine. AML was one of five Brevard firms recognized in 2014 by GrowFL, the Florida Economic Gardening Institute, as companies to watch this year.

Transportation: At Port Canaveral, expansion and modernization are setting the stage for major growth in the region's ability to transport people, products, container shipments and bulk cargo. A new $1.5-million bulk conveyor system at the port, capable of offloading 2,000 tons per hour, began service in January when the Bahamas Spirit brought in a shipment of limestone for Martin Marietta.

Space: SpaceX, the pioneering private rocket firm headed by billionaire Elon Musk, is based in California but has made Brevard County its main operational home. The two launch pads it leases at Kennedy Space Center and Cape Canaveral Air Force Station are key to the company's ambitious plans. The firm has private and military contracts for more than two dozen launches from the cape in the next several years and will begin carrying astronauts to the space station in 2018. Long range, it's laying groundwork for a Mars mission. Space-related employment has not returned to the levels of the space shuttle era, but a resurgence is under way, more balanced than ever between private and government work.

Patel, a Brevard Achievement Center board member since 2009, was named CEO in 2012 to energize the center and its staff of 89, working out of offices in Rockledge, Titusville and Melbourne. The center serves more than 6,000 clients in 14 programs, including one that integrates disabled workers into federal employment sites throughout Florida and Puerto Rico.

Before joining BAC, Patel spent eight years with Harris, including a stint as program manager for the F-35 jet avionics program at the Melbourne-based technology and defense firm. Patel, who holds two engineering degrees and an MBA from the University of Florida, was named a 2015 finalist for the "4 Under 40" community leadership award by the LEAD Brevard program.

In his spare time, Patel enjoys climbing mountains and in a related capacity serves as a director for a Brevard non-profit, RockOn, which introduces children with disabilities to the sport of rock climbing.

Through mergers, the Brevard County- based credit union has doubled in size in recent years to become Florida's third largest, with more than $3.2 billion in assets, 58 branches and more than 700 employees. The credit union is expanding its Brevard headquarters on North Wickham Road at Baytree Drive to better serve its customers in 14 counties. Prepping for more growth as the economy expands, the credit union got rezoning approval to add up to three multistory office buildings and a 500-vehicle employee parking garage — a $30-million commitment to its home base.

Tourism Strength: With home sales continuing to rise and unemployment edging down, Flagler County and Palm Coast hope to generate increased momentum in 2015. Flagler was among the counties hardest hit by the recession, and the recovery has been slower than many locals had hoped. Community leaders point to strength in sports tourism and double-digit annual growth in hotel taxes; home building, with permits up 32%; consumer spending, with local taxable sales up 6. 6%; and utility and transportation infrastructure projects, particularly in and around Palm Coast, the county's largest city.