A report from Florida TaxWatch

Some of Florida's most economically depressed areas are benefitting from a small state economic development program, according to Florida TaxWatch. In their latest independent report, Florida TaxWatch calls on the Legislature to revise and extend the state's Enterprise Zone program, designed to revitalize and redevelop distressed, blighted areas in Florida.

"Enterprise Zones across the state have helped curb a shortage of investment, in both local community support and in private capital, experienced by the state's deteriorating areas," said Dominic M. Calabro, President and CEO of the independent, nonpartisan, nonprofit public policy research institute and government watchdog, Florida TaxWatch. "Our comprehensive analysis of Florida's Enterprise Zones calls for substantial legislative reforms that will increase the program's efficacy and value to taxpayers and each of the communities they were established to serve." 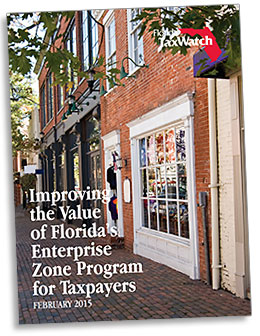 The report, Improving the Value of Florida's Enterprise Zone Program to Taxpayers, highlights several often overlooked benefits to the program, including that it is one of the only economic development programs available to retailers and that companies in Enterprise Zones provided necessary services to their communities, such as access to food and medications. The report also notes the relatively low cost of the program compared to the state's other economic development programs.

While the report does encourage lawmakers to extend the program, Florida TaxWatch calls for several responsible reforms to increase the efficacy and taxpayer benefit of the program in communities around the state. Among the recommendations, TaxWatch advises that the program should improve its marketing efforts to focus on companies proven to create jobs, require reporting metrics for zones, and require more transparent data be available to local taxpayers.

"Enterprise Zones meet a need that no other program can," said Bob Swindell, Chairman of the Florida Economic Development Council and President and CEO of the Greater Fort Lauderdale Alliance. "While Enterprise Zones aren't attracting the state's largest companies with the highest-paying jobs, they are directly affecting the quality of life for residents of the state's most isolated and deteriorating areas."

"Enterprise Zones are a vital tool to encourage economic development and provide needed jobs to Floridians in low-income urban and rural areas," said Amy Evancho, President of the Florida Economic Development Council. "The Florida Legislature must act to make smart reforms to ensure this valuable tool continues to provide essential services, such as access to health care and food, to Florida's economically depressed areas."