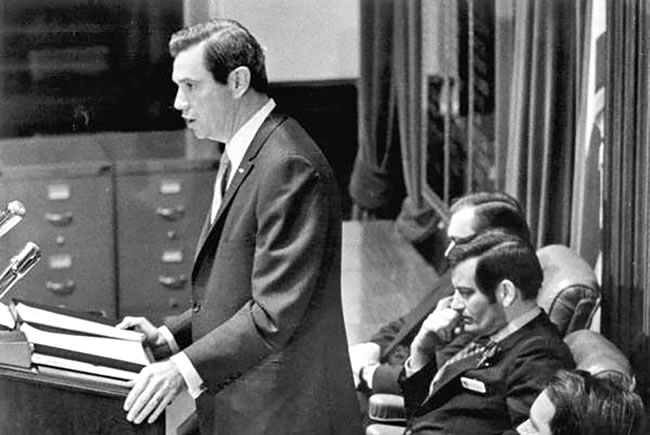 Gov. Reubin Askew tells lawmakers that he is extending the special session in 1971 so they can consider corporate income taxes and other issues.

The Legislature's 1971 effort to tax fairly has become a law of unintended consequences.

The Legislature's 1971 effort to tax fairly has become a law of unintended consequences.

A week before Thanksgiving in 1971, members of the Florida Legislature met to begin writing the law that created the state's corporate-income tax. Gov. Reubin Askew, the late Democrat who had led a constitutional amendment campaign calling for the corporate tax, offered a warning.

"To create inequities, to provide loopholes or to grant unwarranted tax credits in writing this particular bill would be to cheat the people of Florida and make a mockery of their November 2nd directive," Askew told lawmakers on Nov. 17, 1971. "We must not allow this to happen."

Lawmakers applauded politely. Then they created a loophole. Ironically, they created it not to help businesses evade taxes, but to ensure that all businesses would pay a fair share. Since then, however, the loophole has become an avenue for some companies to lower their tax bills by millions of dollars annually.

One of the chief difficulties facing states in levying a corporate income tax is determining where a business actually earns its profit. A company might make a product in one state, sell it in another and be managed from a third — all parts of earning a profit. States must find a way to divide, or apportion, where multistate and multinational companies derive their income.

The challenge is even more complex when dealing with a company's "passive income" — such as royalties, rents, dividends and interest — which can be harder to pin down to a specific location. So when the 1971 Legislature wrote Florida's corporate income tax law, it chose to essentially ignore passive income when deciding how much of a company's profit to tax.

But that created another potential problem. There were a handful of firms that made a significant amount of their money from passive sources — namely, rentalcar and property-leasing companies and mining firms that received royalties from other companies with which they shared mines or wells Ignoring passive income in those cases could have allowed those companies to avoid Florida's tax entirely.

"We were just basically saying that, no matter how you're doing your business or anything else, you should pay your fair share of taxes," says Jim Tait, staff director of the Florida House of Representatives' Finance & Tax Committee when the corporate income tax was created.

Nobody envisioned, Tait says, that entities known as "intangibles holding companies" would proliferate in coming decades, particularly among the multistate and multinational companies that would have an increasing presence in Florida.

Here's how those businesses are structured: The parent company transfers the rights to its intellectual property — names, trademarks, logos and patents — into a separate entity, which "holds" those intangible assets. The parent firm's operating subsidiaries then pay "royalties" to the holding company for the right to use the intellectual property. The arrangement allows the operating subsidiaries to create new expenses that serve to lower their total taxable profit.

Meanwhile, the holding companies, which are often based in tax havens and usually have no employees or tangible property in Florida, claim their profits are exempt from the corporate income tax. Their chief argument: The 1971 law specifying that only mining companies have to include royalty income when calculating their taxes.

Nobody knows exactly how many companies structure their holdings this way. The Florida Department of Revenue, which maintains that royalties paid to intangibles holding companies are taxable, has discovered 105 companies engaging in the practice since 2000. But that only counts companies unearthed in audits or firms that have petitioned the department for tax refunds; there are almost certainly many more.

The amounts of money at stake can be substantial. The Department of Revenue assessed one unnamed company $46 million for back taxes and penalties, according to documents produced in litigation. Another company was assessed $35 million.

Several companies have been identified in litigation. Electronics retailer Best Buy, for instance, sued the Department of Revenue last year, claiming it was owed a tax refund of nearly $570,000 for an 11-month period because its intangible holding company paid Florida in error. Best Buy's holding company, known as BBY Solutions, licenses the company's intellectual property to Best Buy Stores LP, which operates retail stores, and BestBuy.com LLC, which operates the company's website. That litigation is still active.

Microsoft similarly sued the department after auditors claimed Microsoft owed nearly $2.5 million in back taxes over a three-year period. The case was settled.

Cigarette maker Reynolds American has twice sued to challenge assessments levied against its holding company, known most recently as Reynolds Innovation Inc. In one case, Reynolds was assessed $4.6 million in back taxes for a period covering four tax years; the company settled for $1.8 million in back taxes, according to court records, less than a third of the amount initially charged.

Records indicate the department settles the vast majority of cases before they reach the courts — often at just dimes on the dollar. In fact, more than half of the companies that have been assessed for using intangibles holding companies have settled for one-third or less than the amount initially charged.

The department lost the only case that has ever made it to a judge's decision. That case involved convenience store retailer Circle K, which had its operating entity Circle K Stores pay royalties equal to 1.5% of its total sales to an intangibles holding company, called Circle K Enterprises. The holding company was based in Delaware and had no employees or physical property anywhere in the world. The arrangement allowed Circle K Stores to shield $56 million from Florida's corporate income tax over a three-year period and saved it as much as $3 million in Florida taxes.

In siding with Circle K, the judge's decision came down to the 40-year-old provision to ensure mining companies paid tax.

"I don't know why they put it in the way they did it, but clearly royalties have not been something that the Legislature said we're going to tax, except on the mining situation," Judge Charles A. Francis said during a December 2011 hearing. "The loopholes are loopholes or whatever, and if they're there and if the Legislature doesn't act to correct it, I think that's nothing I can do anything about."

Closing the mining loophole won't necessarily mean that Florida can begin taxing intangibles holdings companies, however. That's because a state must also prove that a company is doing business within its borders, which is known as establishing "nexus." It's easy to do when a company has a store or factory in Florida.

A handful of state lawmakers have discussed addressing the issue in recent years, either in isolation or as part of broader tax reform. But they have consistently chosen not to act, in part because the Republican-controlled Legislature is loathe to make changes that would raise taxes on businesses.

One key lawmaker — Sen. Dorothy Hukill, a Republican from Port Orange who chairs the Senate Finance & Tax Committee — says she intends to revisit the issue again at some point before or during the 2015 legislative session, which begins in March.

"I want to look at historically why this is set up this way and how is it actually working today," Hukill says, "and whether we should be looking to change it."