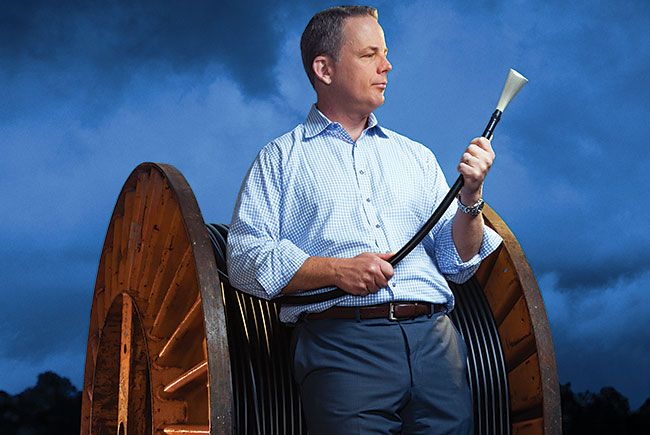 "There are probably very few companies that have gone through more transformation than we have." — Joe York, Florida president, AT&T

Old copper-wire phone technology is disappearing. Should upstart phone providers be allowed to piggyback on the new fiber networks the traditional powerhouse phone providers are installing?

Old copper-wire phone technology is disappearing. Should upstart phone providers be allowed to piggyback on the new fiber networks the traditional powerhouse phone providers are installing?

Since taking over a year ago as AT&T's Florida president, Joe York has spent an inordinate amount of his time in a small section of Palm Beach County west of Delray Beach best known for suburban retirement communities. York's a regular face there at town halls, homeowners association meetings and "senior tech training" days.

He's there so often because West Delray is one of two trial sites nationally that will shape the future of both AT&T and the entire phone business. Under Federal Communications Commission supervision, AT&T is moving the area off the old phone technology of copper wires and networks of switches, which dates back to Alexander Graham Bell, and onto a modern, internet-based fiber network.

Fiber networks are nothing new, and customers have been abandoning copper wire land lines for years ["Trend No. 3: Technological Shift," page 76]. But the AT&T trial marks the first time the FCC is allowing a phone company to shut down a copper-wire network across an entire community.

AT&T sold the feds on the experiment as a way toward a new regulatory scheme better suited to the new era. How it plays out has implications throughout Florida as the state's big three telecoms — AT&T, Verizon and CenturyLink — and the smaller, largely rural-serving telecoms contend against each other and cable companies and wireless providers.

Once upon a time, "incumbent" telecoms like AT&T and Verizon provided monopoly phone service within federally defined territories. Deregulation in 1996 and technology changes have transformed the industry. The former monopoly phone companies have morphed into mobile phone and data delivery companies while deregulation required them to sell access to their landlines — at discounted, regulated rates — to startups and other telecom competitors. The dramatic reshaping of the industry has changed who provides land line service and how it's provided.

Since then, market forces have reshaped, dramatically, both who provides land line service and how it's provided.

Just six years ago, traditional phone companies held 70% of the business phone market in land lines and 76% of the residential market in Florida. Today, the old powerhouses have only about half the business market and half the residential market. The Florida Public Service Commission says AT&T's number of home land lines in one recent year fell by 23% and business lines by 10%.

Along with the shift in land line market share, there's been a shift in technology — from the old copper wire network to fiber. Since 2008, business customers in Florida have added 411,000 lines using fiber and voice over internet protocol, or VoIP. Meanwhile, the number of business customers using old-style land lines dropped by 791,000.

Not content with dominating the fading copper wire technology, the telecoms have invested big in fiber. AT&T won't disclose how much it has invested in Florida, but it has spent $20 billion nationally to lay fiber. Verizon has spent $2 billion in Florida of the $22 billion it's spending nationally on fiber and is still working to complete the overlay of its legacy footprint with fiber service.

Amid the dramatic change in technology and customer preferences, the telecoms face the issue of what to do about the aging — and expensive-to-maintain — copper wire phone networks.

The traditional phone companies can't simply shut off the power to copper lines when there aren't enough customers to make it profitable. There are technical issues: Getting home-alarm monitors, medical alert devices and some 911 functions to operate properly on fiber, for example. But the biggest issue is regulatory: The old network remains the subject of legislation and a thicket of FCC rules, dating to the days of phone monopolies, that control whether telecoms can drop service.

The older telecoms say that with customers leaving at exponential rates and competitors free to invest where they deem proper, they too want the freedom to put their money where they see fit. AT&T wants to move wired line customers in its 22-state service area to VoIP within six years. Verizon has similar intentions but hasn't announced a timeline.

To show the FCC it needs a lighter regulatory hand, AT&T in 2012 asked for trials in select regions — the FCC agreed to the experiment in West Delray and another in rural Alabama — where customers would be moved from the old copper wire phone system to internet-based service plans. How much customers pay deppends on what services they buy.

Some in the area worry about losing phone service during hurricanes. But in Schulbaum's own 500-home community, residents were delighted one day to find AT&T installing fiber because it meant having an alternative for TV service to the cable company, he says. "You can't hold back the future," Schulbaum says.

The traditional telecoms would like to accelerate it. Fiber networks are cheaper to operate, use bandwidth more efficiently, open the door for blending wired and wireless service and allow the selling of packages of services — whether cloud storage or AT&T's U-verse, which combines voice and data, especially video much in demand by customers, at transmission speeds customers also increasingly want. AT&T last year acquired DirecTV; it sells DirecTV in areas it doesn't reach with U-verse.

The question now is whether the newer telecoms and internet service providers like Atlanta-based Earthlink should have the same access to the incumbent carriers' fiber lines that they've had to the old copper wire lines.

If the incumbents cut off the upstarts from access to the fiber lines, "they renew the monopoly," says Eric Einhorn, senior vice president for government affairs for Arkansas-based Windstream, a telecom that's active in both camps. It's the incumbent telecom provider in a small portion of north Florida but has been growing fast, over other telecoms' lines, in business customers in south Florida.

In November, the FCC proposed rules to "preserve competition" and "last mile" access for competing companies on fiber.

AT&T and Verizon don't want legacy regulations extended over the new technology, however. AT&T says the FCC found a decade ago that refusing access to fiber didn't hurt competing telecoms. Such regulation is a disincentive to expanding fiber to more people, it says. AT&T also has argued to the FCC that it makes no sense to regulate it and its telecom brethren as if they were dominant monopolies when competitors now lead the market. In fact, AT&T said, it's at a disadvantage: It has to serve every house in its legacy territory on demand. Newer competitors have newer, more technically advanced, lower-cost networks, non-union workers, lower benefit costs and fewer retirees.

AT&T has said the trials in Alabama and Florida will show that conventional public utility regulation no longer is needed and will establish practices for informing customers about their options in the new environment.

York says the trial will take awhile as will the shift away from the old technology. "This is a process that will take years to work through," he says.