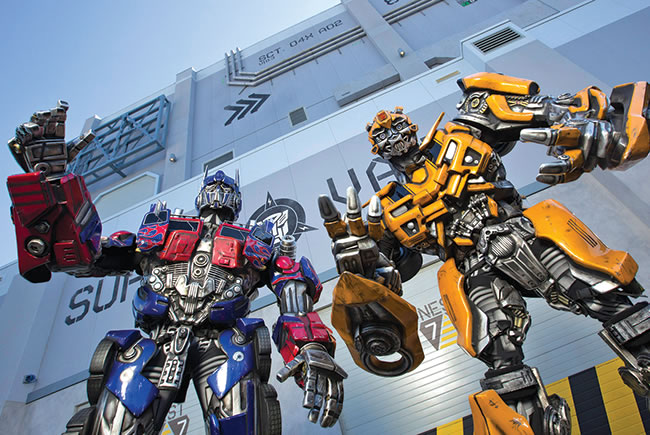 Universal opened a Transformer attraction in 2013, part of a parade of additions that included Despicable Me and The Simpsons.

Just a few years ago, Universal was struggling. Now on an expansion tear led by Harry Potter, the resort is reshaping the theme park world in Orlando.

Just a few years ago, Universal was struggling. Now on an expansion tear led by Harry Potter, the resort is reshaping the theme park world in Orlando.

On Jan. 14, 1990, amid cheering employees and fluttering confetti, Michael Eisner, then CEO of Disney, unveiled a sweeping expansion of Walt Disney World that called for dozens of attractions, thousands of hotel rooms and a fourth theme park to be built at the resort over the next 10 years. The 1990s would be known, Eisner declared, as "the Disney decade."

Twenty-five years later, something similar is happening in central Florida. Only this time, it might be known as the "Universal decade."

Long overshadowed by Mickey Mouse, Universal today is growing explosively, powered by the magic of a popular boy wizard and the money of an initially skeptical new owner. The two-park resort has added close to $1 billion worth of attractions in just the past five years, with more under construction now. It opened a fourth on-site hotel last year and immediately began work on a fifth. There is growing speculation that Universal is developing a "third gate," possibly a water park, to accompany Universal Studios Florida and Islands of Adventure.

The results are evident at the gates. Combined attendance at Universal Studios and Islands of Adventure ballooned 50% between 2009 and 2013, from 10.2 million to 15.2 million, according to estimates compiled by the Themed Entertainment Association and consulting firm AECOM. Revenue has nearly doubled, from $775 million to almost $1.5 billion, according to state records.

And the crowds continued to grow in 2014: Executives at Universale parent company, Philadelphiabased cable giant Comcast, say the resort achieved record attendance over the summer and double-digit growth in per-guest spending, following the July opening of a second Harry Potter-themed land.

Comcast says it expects that trend to continue. "When you are 20%, 25% market share in a market that is growing and you have momentum, you realize there should be many years of growth ahead," Comcast Chairman and CEO Brian Roberts told investment analysts at a conference last fall in Beverly Hills, Calif. "Right now, everything we've done has been a pleasant surprise. And I hope that will go for a very long time."

Universal's reversal of fortunes has been dramatic. The resort struggled through an extended slump in the 2000s, with attendance plummeting 23% from a peak of 12.1 million in 2004 to less than 9.3 million in 2009. Universal, then co-owned by General Electric and Blackstone Group, came perilously close to a cash crunch as a mountain of debt came due during the global economic downturn.

Industry analysts blamed the declines on a lack of investment in new attractions, particularly in Islands of Adventure. The $2.2-billion park opened in 1999, but the company had left it largely untouched. "They were not refreshing. They were not adding," says Abe Pizam, dean of the Rosen School of Hospitality Management at the University of Central Florida. "In this business, you cannot sit on your laurels and do nothing. You have to reinvent yourself on a constant basis."

Universal moved to reverse the trend by beating Disney for the rights to Potter, then spending $265 million meticulously recreating settings from the Potter books and films in a collection of rides, shops and eateries inside Islands of Adventure. Working closely with British author J.K. Rowling, who created the magical world, and Warner Bros. Entertainment, which brought it to life on the big screen, Universal devised a long list of unique items only found in the Wizarding World, from magic wands and chocolate frogs to "butterbeer," a sugary concoction made in both liquid and frozen forms.

In December 2009, however, Universal changed owners - casting a cloud of uncertainty across the resort. Comcast struck a $13-billion deal to buy a majority stake in Universal's owner, NBCUniversal, from GE. Comcast, the world's largest cable provider, was primarily interested in NBCUniversal's cable networks. Steve Burke, the Comcast executive who became CEO of NBCUniversal, once told analysts that Comcast put a "very low" valuation on the parks business. Many analysts predicted that Comcast would move quickly to sell off the parks.

Comcast executives changed their minds after the Wizarding World of Harry Potter opened on June 18, 2010. The resort's fortunes changed almost overnight. Attendance jumped 20%, and per-guest spending rose 19% in 2010, even though Potter was only operational for half of the year.

Instead of selling theme parks, says CEO Roberts, Comcast began "doubling down." It accelerated spending at Universal Parks & Resorts to more than $500 million a year, with a goal of opening major attractions at its resorts every year. Six months after Comcast closed on its NBCUniversal acquisition, Blackstone used a contractual clause to force Comcast to either buy Blackstone's half of Universal Orlando or sell the resort off entirely. Comcast decided to buy, spending another $1 billion.

With a beefed-up construction budget, Universal Orlando added a parade of attractions, including venues based on Despicable Me (2012), Transformers (2013), and The Simpsons (2013). The biggest addition of all was the second Harry Potter land, which was built for a reported $400 million inside Universal Studios. It is connected to the original Wizarding World in Islands of Adventure by a Potterthemed train attraction that is only available to visitors who pay for tickets to both theme parks.

Comcast has put a sense of urgency behind its investments: The Transformers attraction was initially planned to open in late 2013 or early 2014, but Burke told Universal managers to move faster and approved a higher budget allowing for around-the-clock construction, according to one person familiar with the discussions. The ride ended up opening in time for the summer of 2013. (Burke declined an interview request, and a Universal spokesman declined to answer questions.)

At the same time, Comcast has pushed Universal more deeply into the hotel business, in attempt to capture even more of visitors' total vacation spending. Last year, in a joint venture with Loews Hotels and Resorts, Universal Orlando opened the 1,800-room Cabana Bay Beach Resort. It was Universal's first moderately priced accommodation (the resort's first three hotels, also joint ventures with Loews, are deluxe resorts), and it nearly doubled Universal's room inventory, from 2,400 rooms to 4,200. As soon as Cabana Bay was completed, Universal and Loews announced a fifth hotel: The 1,000-room Loews Sapphire Falls, which is scheduled to open by the summer of 2016.

Comcast has commissioned a study that it says shows Universal Orlando has the capacity for between 10,000 and 15,000 rooms, suggesting even more hotels are in the development pipeline. (Disney World, by contrast, has about 26,000 hotel rooms and timeshare suites). "We're so under-hoteled," Roberts, the Comcast CEO, said recently.

Comcast, which acquired 100% control of NBCUniversal in 2013, is also expanding the rest of its theme park portfolio, which includes the wholly owned Universal Studios Hollywood in Southern California and overseas resorts in Japan and Singapore that it operates through licensing deals. It opened a new Harry Potter land in Japan last year and is building one in California that is scheduled to open in 2016. It has also struck licensing deals for new Universal Studios theme parks in Beijing and Moscow.

Altogether, Comcast says operating cash flow at Universal Parks & Resorts has tripled since 2009, from less than $400 million to more than $1 billion. And the parks have become a cornerstone business for NBCUniversal: Though theme parks remain the smallest of NBCUniversal's four main segments, generating less than 10% of the media conglomerate's total revenue, they are the secondlargest profit driver (behind cable networks), responsible for 21% of NBCUniversal's $4.7 billion in operating income before depreciation and amortization in 2013.

"This has been the surprise success story of the acquisition," says Jessica Reif Cohen, a media equities analyst for Bank of America and Merrill Lynch.

A spokesman for Disney declined to answer questions about Universal's impact. Company executives, publicly, have taken a waitand- see approach to Universal's moves. "I think the jury is still out," Disney Chairman and CEO Bob Iger said in late 2013 in response to a question about Comcast's theme park expansion. "We'll see how much they're willing to invest and what kind of creativity they have to invest in."

But it's clear that Universal has Disney's attention. Disney World, for instance, is building a new land in its Animal Kingdom park based on the Avatar film, which, like Universal's two Harry Potter lands, will include several attractions and themed shopping and dining. Most industry analysts believe Disney's decision to acquire the Avatar rights was prompted by Universal's success with Potter. Disney is also developing plans to build more attractions based on Star Wars, one of the few intellectual properties as successful as Potter.

Disney World has made it a priority in recent years to try to keep tourists on its property for their entire vacations, using tools such as a free airport shuttle-and-luggage service for guests staying in its hotels, which negates the need for a rental car, and a sliding-scale ticket-price structure, in which a fourth or fifth day in one of Disney World's theme parks is much cheaper than a one-day pass at another Orlando park.