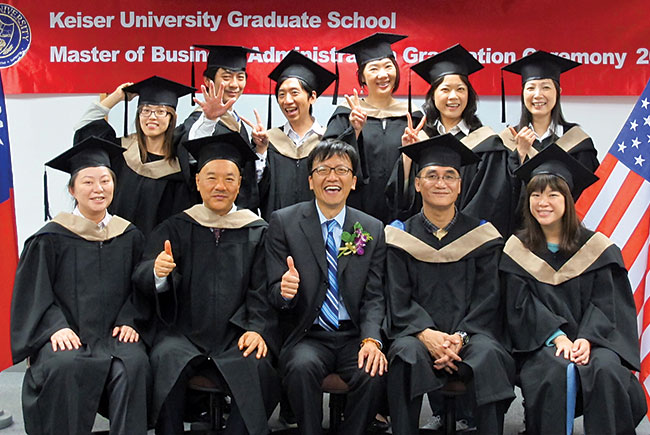 Keiser has added an American-style MBA program in Shanghai.

Keiser University extends its reach to China, Nicaragua and beyond.

In 2001, Keiser University was expanding to China when the Sept. 11 terrorist attacks brought a halt to U.S. approvals of student visas. The Fort Lauderdale- based school no longer could bring Chinese exchange students to Florida through its partnership with Peking University, "and that killed the program," says Chancellor Arthur Keiser.

By decade's end, however, the visa ban had been eased and Keiser again was turning to China for new students. In 2010, it opened an off-campus site in Shanghai at Jiaotong University, offering a bachelor's program in business administration taught in Mandarin Chinese.

Keiser, who founded the SACSaccredited university in 1977 to provide a career-focused education, has made it the school's mission to prepare students for a global work force. Shanghai, he says, is just the beginning.

"In the long term, everything is going to be a global venture," he says. "If you're not involved in global activities, it's going to be pretty hard to survive and compete."

Keiser has since added an American-style MBA program in Shanghai, reaching more than 200 Chinese students annually at both the undergraduate and graduate levels. The university has language centers in Korea, Taiwan and Moldova, laying the groundwork for a broader Asian and eastern European expansion.

"Our goal is to have an international MBA program so that students can study different semesters at different Keiser campuses and learn firsthand about the different regions of the world," Keiser says. "We're not there yet."

Two years ago, Reiser gained a foothold in Latin America when it bought an 18-acre residential campus in Nicaragua from Ave Maria University, which cited budgetary pressures for selling the school. The San Marcos campus serves about 500 undergraduate and graduate students who want an American-accredited education. "It will be our gateway to future efforts in Latin America," Reiser says.

The campus setting with traditional students in Nicaragua offers Reiser some important lessons that will help it expand in Florida. While Reiser's core market in Florida consists of older students focused on specific career goals, it is planning a 100-acre campus in Palm Beach County for the traditional 18- to 24-year-old market, complete with dorms, athletic fields, food service and a student center. "We're close to announcing a site, and the financing is in place," Reiser says.

Meanwhile, the university continues to broaden its reach outside of Florida. It's working with the Ministry of Education in the Dominican Republic to offer a master's degree program in nursing. Its new Reiser Mills Foundation provides scholarships to domestic and international students seeking to study or work abroad. And this fall, Reiser will begin a bachelor's degree program in golf management in partnership with Hainan Normal University in China's Hainan Province.

"Traditionally, education there has been liberal arts and classically driven," he says. "There's a big emphasis now on sports management."

BARBADOS - Britainbased Cable & Wireless Communications, which has a corporate office in Miami, bought Barbadosbased cable TV and internet service provider Columbus International for $1.85 billion to expand in the Caribbean and Central America.

CHINA - Miami-based Carnival signed a memorandum of understanding with Italian shipbuilding company Fincantieri to collaborate on a venture that could lead to cruise ships being made in China for the first time. Carnival previously signed an agreement with China's largest shipyard, China State Shipbuilding, which raises the possibility of a three-way arrangement.

PERU - Enterprise Florida will lead a trade mission in late March to Peru, the state's eighthlargest trade partner. In 2013, Florida exported more than $2.8 billion in products to Peru and imported $2.6 billion in Peruvian products.