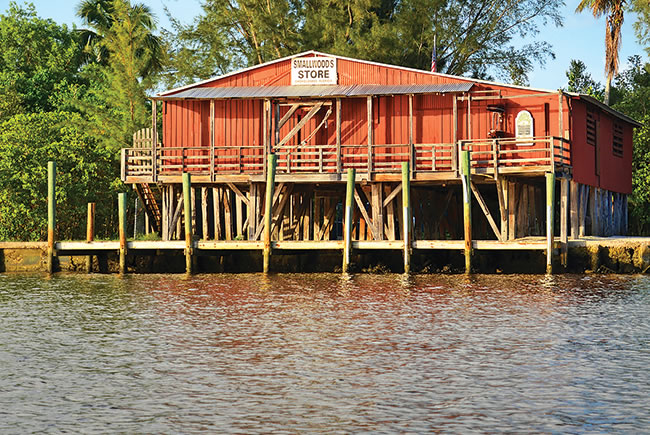 The Smallwood Store, which partly hangs over the Gulf, is on the National Register of Historic Places

The town that killed an outlaw

Word was Edgar J. Watson was a killer. Everyone knew he hid a gun beneath his black trench coat. He had a bad temper and mean disposition. People said he shot Belle Star, an outlaw herself, and when she was lying on the ground dead, he shot her again just to make sure.

He couldn’t stay in Oklahoma after that, so, in 1889, he slipped away to Florida, where he killed a man in Arcadia — supposedly in self-defense — and then continued on his way to become a sugar cane farmer in southwest Florida’s Ten Thousand Islands region, probably the state’s most remote and lawless place at the time.

One of the first people he met there was Ted Smallwood, owner of the Smallwood Store, a combination trading post, post office and all-purpose market. Located on the southern tip of Chokoloskee Island, with part of the building overhanging the Gulf, the Smallwood Store was all there was as far as retail for more than 50 miles around. Smallwood didn’t have a problem with Watson. He knew Watson’s reputation, but Watson paid his bills on time and didn’t cause any trouble in the store.

But the stories kept circulating. During a trip to Key West, Watson cut a man’s throat. Two other men, known to be on Watson’s bad side, were found murdered. At Watson’s sugar cane farm, he tended to hire men on the run from somewhere else, and oftentimes these men turned up missing or dead in the Everglades. The town suspected Watson was killing his employees so he wouldn’t have to pay them.

One day in 1910 at the Smallwood Store, a crowd confronted Watson and accused him of various misdeeds. Not one to put up with guff, Watson drew first, but his pistol misfired. When the crowd was finished firing back, Watson was dead, face down on the floor, shot 33 times.

The building where the killing occurred still exists. It’s on the National Register of Historic Places and is one of the oldest structures in Collier County. It’s no longer a working trading post and store — now it’s a non-profit history museum — but to look at it today is to see very much how it looked in the days of Watson, whose life Peter Matthiessen dramatized in the 1990 novel, “Killing Mister Watson.”

There are still shelves of ointments and elixirs, animal pelts hanging from the walls, corroded cans of beans and hominy, stacks of produce boxes, piles of burlap sacks once filled with Cuban coffee beans, and a long wooden counter worn smooth by 109 years of rubbing hands. There’s even a Smallwood still in charge, 58-year-old Lynn Smallwood McMillin, Ted’s granddaughter.

And here’s something else that today’s museum has in common with yesterday’s store: Bad blood.

On one side is Smallwood Mc- Millin and on the other is Florida Georgia Grove, a company owned by a group of 12 friends from Sebring. In 2004, FGG purchased land adjacent to the Smallwood Store’s property and discovered that the only viable road that leads to the store — named Mamie Street after Ted’s wife and Smallwood McMillin’s grandmother — is actually located on FGG’s land. Jim Kelly, a Highlands County attorney and one of FGG’s partners, says the group offered to spend up to $200,000 to build the Smallwood Store a new access road, but the Army Corps of Engineers denied the permit because an access road — Mamie Street — was already there.

FGG, with county permits in hand, tore up the road in 2011, which forced the Smallwood Store museum to close. FGG expected that with the road gone, the Corps would have to approve the new road, but that didn’t happen. After a court order later that year, FGG restored Mamie Street, and the Smallwood Store reopened, but the issue has bounced around in the courts ever since. Attempts at mediation failed. Several tries at reaching settlements also failed, but the sides keep trying, says Richard C. Grant, a founding member of the Naples law firm Grant Fridkin Pearson, which represents the Smallwood Store. If the sides can’t settle, a trial to determine Mamie Street’s fate could happen later this year.

No matter what’s decided, Smallwood McMillin insists that the Smallwood Store has to survive, not just for her family’s name, but for the sake of anyone who cares about Florida’s past.

“This place is a museum, but it’s a living museum,” she says. “History happened here.”