A look at the economic impact from bowl games in Florida 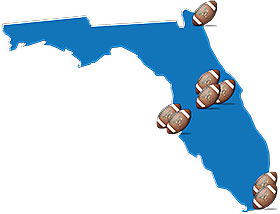 With college football on the verge of the first ever playoff to determine the Division I National Champion, one aspect of the traditional postseason remains firmly in place: the bowl games. No matter which school wins the National Championship this season, Floridians may be the true champions, as Florida is set to host eight out of the 38 bowl games, more than any other state.

College bowl games benefit Florida in a variety of ways, especially those that host two out-of-state schools, since fans and teams stay in Florida hotels, and fans will have the opportunity to take in the state’s world-renowned theme parks and spend money in the local economies, all while paying state and local taxes. The attention given to the host regions through advertising, traditional and social media exposure, and the broadcast of the games (in some cases, worldwide) can provide a significant boost to the state’s tourism marketing efforts. In addition to their economic impact, the bowl games’ organizing committees also give back to Florida communities through charitable initiatives.

This season, seven out of the eight bowl games to be played in Florida will feature two out-of-state teams, and only one Florida school (UCF) will play in the eighth, bringing 15 schools and their fans to the Sunshine State potentially for the first time.

Bowls have been played in Florida for 80 consecutive years

Florida, California, Louisiana, and Texas were the first states to host bowl games. The goal of hosting bowl games was to promote the host states’ tourism and business amenities. In fact, the predecessor of the Orange Bowl, the Festival of Palms Bowl, was organized with the goal of revitalizing Miami economy after the Great Depression.

To date, Florida has successfully hosted bowl games for 80 uninterrupted years. In fact, the Orange Bowl, along with Louisiana’s Sugar Bowl and Texas’s Sun Bowl, are the second-oldest bowl games in the nation. In the recently ended Bowl Championship Series (BCS) era, Florida was home to 4 out of 15 National Championships.

In the new College Football Playoff era, Florida has upped its Bowl game, as it has successfully secured two new bowls: the Miami Beach Bowl and the Boca Raton Bowl, and was also selected to host the 2017 National Championship game at Raymond James Stadium in Tampa. Florida will also host the 2015-16 semifinals in December 2015, as part of a three-year rotational agreement between the Rose Bowl, Sugar Bowl, Orange Bowl, Cotton Bowl, Peach Bowl, and Fiesta Bowl.

» NEXT PAGE: A snapshot of all the bowl games being played in Florida