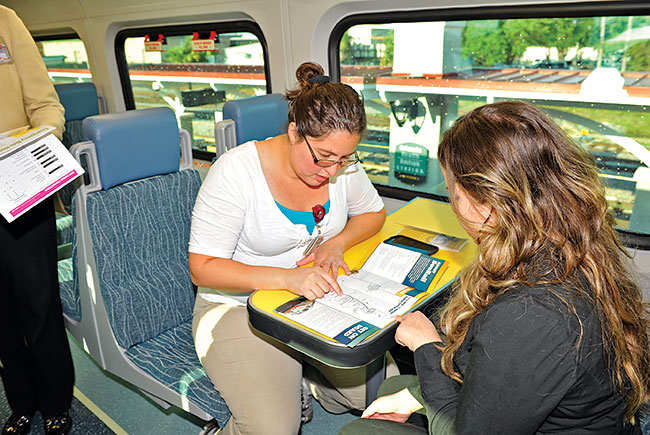 SunRail, the $1.2-billion commuter train system that began service in central Florida in May, has carried about 4,000 riders per day in its first three months of service - not far off the 4,300 projected to ride the train.

The biggest surprise in the early ridership numbers is that two stations expected to be among the busiest for the train - stops at Orlando Health and Florida Hospital, which together employ thousands of commuters - have turned out to be among the poorest-performing.

The Orlando Health/Amtrak station ranked last in passenger boardings among Sun- Rail's 12 stops - 131 passengers per day boarded at the stop, which is about a mile south of downtown Orlando and a short walk from the Orlando Health campus.

Florida Hospital's station, about three miles north of downtown and in the middle of the hospital campus, averaged 173 boardings per day.

By contrast, an average of 779 riders boarded daily at SunRail's busiest station in Winter Park, a popular shopping and dining destination. And 569 people per day boarded in DeBary, a bedroom community in Volusia County that's the northern terminus of the 32-mile train route.

Orlando Health says it has taken several steps to goose SunRail ridership, including subsidizing half the cost of monthly passes for the first 100 employees to sign up, running free shuttles between the station and the hospital campus and posting train and bus schedules on its intranet. "And we continue to explore other marketing opportunities with SunRail," spokeswoman Kena Lewis says.

The state Department of Transportation, meanwhile, tweaked SunRail's schedule in late August to have its final trains depart slightly later, hoping to better align with shift changes at both Orlando Health and Florida Hospital. The city and state are also paying for a $2.1-million renovation of the historic Amtrak station.

Another slow spot: Maitland, where an average of 151 people per day boarded the train during the first three months, topping only the Orlando Health station. City officials and the region's bus agency have discussed testing an hourly van service linking the station to Maitland's largest office park, a major local employment center.

BookThatDoc.com, a 2-year-old Seminole County company that allows patients to schedule doctor appointments online, plans to invest nearly $600,000 into its operations and add 40 new jobs in the region over the next three years. The new jobs will be in information technology, software development, customer service and sales. Based in Altamonte Springs, the company provides scheduling for about 130 medical professionals.

Walt Disney Co. Appointed Josh D'Amaro senior vice president for Walt Disney World resort and transportation operations and Djuan Rivers vice president in charge of Disney's Animal Kingdom. D'Amaro had been in charge of Animal Kingdom, and Rivers was previously vice president of hotel and business solutions at Disneyland Paris. The moves are part of a broader parks-management shuffle triggered when the general manager of Disney's under-construction Shanghai Disneyland left the company for a job with Four Seasons Hotels & Resorts.

APOPKA - The city repealed a Prohibition-era ban on sales of beer and liquor on Sundays.

DAYTONA BEACH - Trader Joe's could receive $6.6 million in incentives for opening a distribution center that is expected to generate 450 jobs at average wages of a little more than $28,000. > Cobb Theatres plans to open a 12-screen theater, including one screen that will be 80-feet wide and nearly four stories tall, as part of International Speedway's One Daytona project. One Daytona has also signed lease agreements with Bass Pro Shops and selected developers for a 145- room boutique hotel. The first phase is expected to open in 2016.

LAKE MARY - Attractionsindustry e-commerce and mobile-ticketing company Accesso Technology Group, whose North American business is based in Lake Mary, signed a three-year contract with a South Korean firm to broker deals with attractions in that country.

ORLANDO - An affiliate of Tribune Media plans to redevelop the site of the Orlando Sentinel and adjacent parking lots into a mixed-use project with apartments, offices and retail. The newspaper says it has a long-term lease on the property. > Homeowners in the MetroWest community voted to borrow $2 million to buy out the developer and take control of the 1,800-acre residential development. > Canvs, a co-working space that can accommodate up to 164 workers, opened in the long-vacant Church Street Exchange Building downtown. > SunTrust Banks is cutting 105 jobs by closing down a fraudresponse call center.

SEMINOLE COUNTY - The county plans to build a $27-million youth sports complex that will open in 2016. The facilities will include a baseball stadium, soccer, lacrosse, softball and football fields. Orlando City Soccer Club will pay $250,000 to build four new soccer fields in return for exclusive use of a county training center and two soccer fields at the county's Sylvan Lake Park.