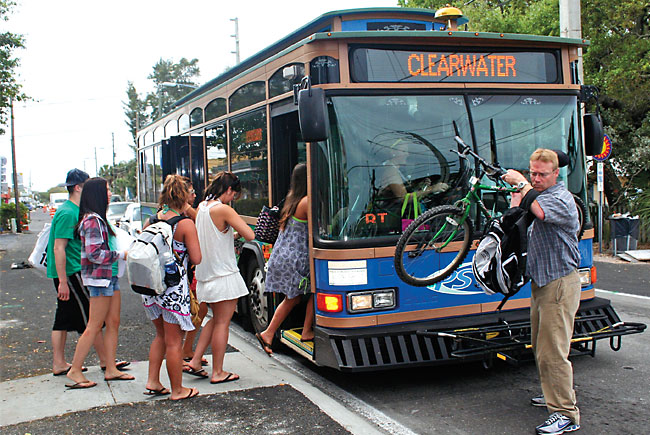 Pinellas voters will decide if light rail gets a green light.

In November, Pinellas County voters will decide whether to spend $2.2 billion for a public transportation plan that would increase bus service and build a light rail system linking downtown St. Petersburg with downtown Clearwater — and eventually Tampa.

The proposal, called Greenlight Pinellas, would raise the county’s sales tax from 7% to 8%, while eliminating the property tax that currently funds the Pinellas Suncoast Transit Authority (PSTA). The increase would funnel an estimated $110 million to $120 million per year to the plan, compared to the $36 million that public transportation gets now each year from property taxes.

The money would buy more buses, create more bus routes and shorten wait times between buses on existing routes. The plan also would pay for 24 miles of light rail and 16 rail stations — and envisions a future spoke across Tampa Bay integrated into a new span of the Howard Frankland Bridge.

St. Petersburg Mayor Rick Kriseman is A strong supporter of the proposal, which also has won wide support from most in the political and business communities. “People will see improved bus service the first year,” says Chris Steinocher, president and CEO of the St. Petersburg Area Chamber of Commerce. “The rail would be up and running by 2024.”

Opponents to the plan include state Sen. Jeff Brandes, a St. Petersburg Republican,who in April wrote a letter to Ananth Prasad, secretary of the state Department of Transportation, complaining that the PSTA was using tax dollars to campaign for the plan. Some members of a tea-party style group called No Tax for Tracks have put out yard signs opposing the proposal, but as of June, Friends of Greenlight Pinellas had raised more than $530,000 — about 17 times more than No Tax for Tracks.

Greenlight Pinellas backers say the plan is the first step toward an integrated regional transportation system. Tampa Mayor Bob Buckhorn says he wants to see Hillsborough County put a transportation referendum on the ballot in 2016.

“Ultimately we have to link downtown St. Pete to Westshore, to the airport and to downtown Tampa,” he says.

During 2013, its first year in business, Bruno Air Conditioning posted $2.4 million in sales. After buying the assets of Air Genie, a competitor, the A/C installation and service company is on track for $9 million in sales this year. Headed by 25-year-old Louis Bruno, the company employs 54 and purchased 17,000 square feet of warehouse and office space in Lee County this year.

FORT MYERS— Comcast is expanding its Fort Myers call center facility, where it plans to hire 200 customer service agents and 20 managers by the end of the year. > Cypress Cove at HealthPark Florida, a continuing care retirement facility, received a $2-million donation from the Mead Family to build a physical therapy and rehabilitation facility.

LARGO— Crawford Ker, the retired football player for the University of Florida Gators and Dallas Cowboys, has sold his 24-location restaurant chain — Ker’s WingHouse — to Third Lake Capital for an undisclosed price. Ker will stay on as CEO.

MANATEE COUNTY— Texasbased D. R. Horton, the nation’s largest home builder, has purchased 665 acres near Lake Manatee in the eastern part of the county for $5.8 million.

PALMETTO— It Works!, a skin care and nutrition company, has moved into its new 50,000-sq.- ft. Headquarters along the Manatee River in Palmetto.

POLK COUNTY— CBD Real Estate Investment, a Celebration- based real estate development company, is proposing to build multiple developments in Polk that would include retail space and more than 3,000 apartments. One of the projects is a 550- unit apartment complex near Florida Polytechnic University.

PUNTA GORDA— Fort Myersbased Murex Properties has purchased Ventura Lakes, a 273-home gated community in Punta Gorda, for $19 million. Murex owns and manages more than 60 manufactured-housing communities in the United States, including more than a dozen in Florida.

ST. PETERSBURG— C1 Bank, hoping to raise $50 million to expand, plans to go public. The bank has 28 branches. > New York-based Utica College plans to offer an accelerated bachelor’s degree program in nursing at its St. Petersburg campus. > BitPay, a bitcoin payment processor, will be the title sponsor of the college football bowl game Dec. 26, at Tropicana Field. The game, previously sponsored by the Beef O’Brady’s restaurant chain, will now be called the Bitcoin St. Petersburg Bowl.

TAMPA— Quest Diagnostics plans to create 350 jobs at its new 48,000-sq.-ft. Tampa facility. The company will get $675,000 in state and local incentives if it creates 175 jobs. Metropolitan Ministries has opened a second Inside the Box Café, a restaurant staffed by current and former Metropolitan Ministries clients. The charity serves homeless families. > Health Insurance Innovations, based in Tampa, spent $32 million to buy Health- Pocket, a California medical technology company that helps consumers compare and rank insurance plans. > A 100-unit apartment complex located near the University of South Florida has sold for $6.4 million. The buyer, Collier Cos. Of Gainesville, plans to demolish the units and build a 180-unit student apartment complex.

WINTER HAVEN— A development group spent $8.5 million to buy 500 acres of city-owned land adjacent to the CSX inter modal rail terminal in Winter Haven. The land will be developed as an industrial park.

One week away from Election Day: Your options for mail-in voting

We are one week away from Election Day and that means it is a very important deadline if you plan on mailing in your ballot.