Florida's booming aircraft manufacturing industry is helping to diversify the state, according to a new report from Florida TaxWatch, the independent, nonpartisan, nonprofit research institute. The report, Ready for Takeoff: Florida Can Lead The Nation In Aircraft Manufacturing, shows that Florida is the most attractive state for aircraft manufacturing, illustrated by the number of industry companies relocating to the state.

"Florida is a great place to do business, and the state's commitment to investing in aircraft manufacturing is ensuring that Florida's economy continues to benefit from this important industry sector," said Dominic M. Calabro, President and CEO of Florida TaxWatch, the independent, nonpartisan, nonprofit taxpayer research institute and government watchdog.

Commercial aviation is expected to increase by 5 percent annually during the next 20 years, and further investment in Florida's existing aircraft manufacturing companies, as well as continued emphasis on relocating companies to the state, will ensure Florida's economy is poised to benefit from this future growth. 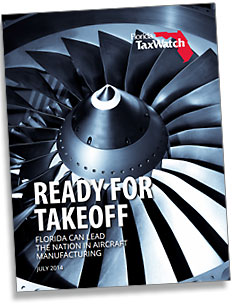 To ensure Florida can continue to reap the benefits of the aircraft manufacturing industry, the report notes that investment in education and student preparation in STEM are crucial to address a skilled labor shortage.

"Expanding the aircraft manufacturing industry helps the state retain STEM talent," said Jennifer Linares, TaxWatch Research Analyst. "However, the shortage of qualified technical employees could be an impediment to the industry's future growth in Florida."

Home to 249 aircraft or parts manufacturing companies, Florida has the most number of these industry companies, second only to California. However, the report points out that Florida is not the least expensive state for the aircraft manufacturing industry, which could cause Florida to lose some of the industry's market share.

"Florida's Legislature and Enterprise Florida have worked diligently to create a favorable climate for all businesses to be successful, including those in the aircraft manufacturing sector," said Robert E.Weissert, Esq., Chief Research Officer for Florida TaxWatch. "To ensure the future growth and success of this industry in Florida, policymakers should continue to provide a competitive environment for aircraft manufacturers."

Read the report here:
"Ready for Takeoff: Florida Can Lead the Nation in Aircraft Manufacturing"