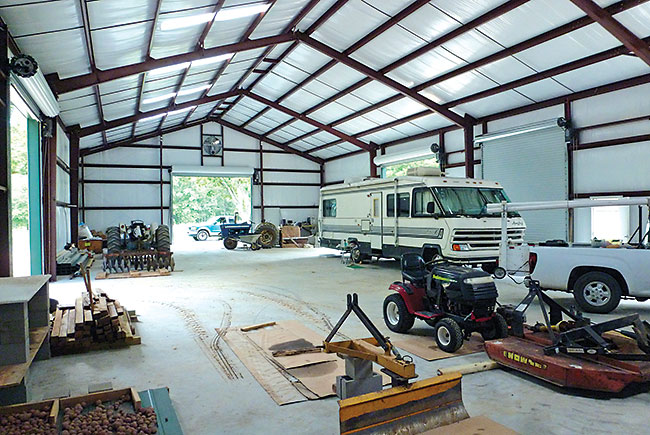 Allied Steel Buildings constructs specialized barns and equestrian arenas in the U.S. and mostly commercial projects outside the U.S.

A Fort Lauderdale company does business everywhere from the Caribbean to Africa.

In 2003, about a month after losing his sales job at a steel building company that went out of business, Michael Lassner used his savings to start his own firm, Allied Steel Buildings.

In a decade, Lassner and his team have grown Allied Steel to $30 million in revenue. Last year, the company designed, engineered and managed the construction of more than 400 projects, ranging from distribution centers to airport hangars to large commercial buildings.

Notably, 70% of its business now comes from jobs outside the U.S.

"The U.S. is highly saturated, low-margin and very competitive," says Lassner, 40, president of the Fort Lauderdale-based firm. Overseas, he says, customers have fewer choices: "We feel like we offer a lot."

The company's first foray into international markets came two years after its founding. It expanded into Canada in 2005. Since then, it has added clients in Latin America, the Caribbean, Africa, the Middle East and other regions. PriceSmart, a chain of stores offering membership shopping in Latin America and the Caribbean, is a regular client.

Allied Steel gets its steel in the U. S. The company, which has 48 full-time employees in Florida and other parts of the U.S., manages ventures onsite.

"There are no limits to where we'll do that; right now we have a manager in Angola," Lassner says.

The company has built 45 structures in Panama. In Africa, Allied Steel is working on a growing number of projects, from aviation and schools to logistics warehousing and a paint production facility. There's also a hangar project in Azerbaijan, a referral from a previous customer. Referrals, Lassner says, account for nearly all of the company's international business.

Lassner expects to grow the business by 40% this year, particularly in emerging and fast-growth markets. The U.S., he says, will remain an important part of the business, especially with the risks inherent in Allied's international expansion.

"With business expansion also comes a unique set of challenges, including steel price variation, supply sourcing, manufacturing, market-entry strategy and building our consumer base," he says.

AVIATION - Fort Lauderdale- Hollywood International Airport has proposed modifications to its incentive program to offer discounts on landing fees, remote parking charges, gate and facilities for airlines from Brazil, Russia, India, China and South Africa in hopes of increasing flights to and from those nations.

REAL ESTATE - Russian real estate developer Vladislav Doronin of Capital Group plans to develop the Brickell Flatiron condominium in Miami with Miami developer Ugo Colombo and to partner on development of a tower on a nearby lot Doronin controls.

TECHNOLOGY - Fort Lauderdale-based health care IT company Intermedix acquired Optima, a New Zealand-based simulation and predictive analytics technology company. Intermedix does business in 16 countries. This is the first foreign firm it has acquired. The acquisition follows the opening of its first international office, in Kaunas, Lithuania. Miami-based Cable & Wireless Communications agreed to sell its 55% stake in Monaco Telcom for $45 million; the company plans to focus on Latin America and the Caribbean. > Miami- Dade County's Pro-Innovation Summit, part of the eMerge Americas Techweek conference, brought mayors from Latin American cities to Miami Beach to discuss ways to use technology to address municipal problems. > Germany-based internet service provider ratiokontakt is opening a Miami office, largely aimed at the Latin American market, with 15 employees and a $1-million investment.

ASIA - After a debut season in the Caribbean, Quantum of the Seas, Royal Caribbean Cruises' newest ship, will home-port in Shanghai, China. The ship is schedule to begin cruising in November and will move to Shanghai in May 2015. > Hong Kong-based Swire Hotels will open its first U. S. hotel in 2015 as part of the Brickell City Centre project that its parent company, Swire Properties, is developing in downtown Miami.

CANADA - Boca Ratonbased security firm ADT will double its presence in Canada with the purchase of Montreal- based Reliance Protectron for $500 million.

COLOMBIA - The Florida Department of Agriculture and Consumer Services and the Southern United States Trade Association are sponsoring a September trade mission to Colombia, with particular focus on agricultural producers.

MEXICO - Miami-based EnviroStar has a deal with a master franchisor in Mexico for its Dryclean USA dry cleaning and laundry stores; the new master franchisor will take over responsibility for expansion in that nation.

South Korea, officially the Republic of Korea, is Florida's No. 28 trading partner. Last year, the value of goods exchanged between the U.S. and South Korea reached $1.56 billion. In 2012, the two nations ratified a free trade agreement. South Korea is the United States' eighth-largest export market.

Free Trade Agreements
The U.S. has free trade agreements with 20 countries, including most of Florida's top merchandise trading partners.