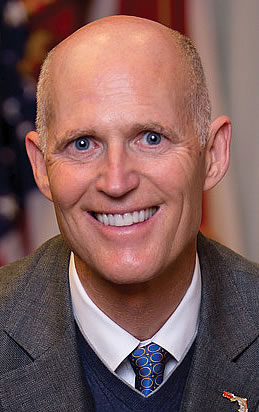 Today, Governor Rick Scott announced he has signed Senate Bill 1666 which strengthens laws and increases resources to protect children from abuse and neglect.

Governor Scott said, “As a father and a grandfather, the safety of Florida’s children is a top priority. That’s why this session we succeeded in creating 270 additional child protective investigators, so we can decrease caseloads and provide our servants in the field the support they need to ensure we’re doing everything possible to protect our children. We have to do everything we can to protect our children from abuse and neglect, and these reforms and targeted investments will better enable our child welfare servants to do their job.”

The reforms signed into law today establish a new Assistant Secretary for Child Welfare at DCF, create a “Critical Incident Rapid Response Team” to quickly investigate child abuse deaths where the child was known to the child welfare system, strengthen provisions relating to safety plans for children who have been abused or neglected and codifies that the foremost goal of the department is to protect the best interest of children.

“We are eager to start implementing this important bill and the resources provided to put needed boots on the ground to protect children,” Interim DCF Secretary Mike Carroll said. “Governor Scott has been a strong and vocal supporter for the children of this state and these reforms would not have been realized without his leadership and devotion to Florida’s vulnerable children.”

Senate President Don Gaetz said, “The goal of this bipartisan legislation is to build on our more than $1.3 billion existing commitment to child welfare through targeted policies that aim to prevent child deaths due to maltreatment, to learn from tragedies we cannot prevent, and to expand the resources needed to help families stay whole and healthy.”

House Speaker Will Weatherford said, “I’m proud we were able to pass this critical legislation reforming our child welfare system to better protect children. While we can never prevent every tragedy from happening, adding additional caseworkers and services for families in crisis will help ensure our child welfare system can continue to serve more children in need and new transparency measures will hold government accountable for improvements. I thank Senate President Gaetz and Governor Scott for making the safety of our children a priority this year.”

Senator Garret Richter, President Pro Tempore, said, “With this critical investment in prevention services for Florida children and families, Governor Scott and the Legislature are paving the way for more children to grow up in safe, nurturing homes. We must stay focused on the end goal, and that is healthy families.”

Senator Eleanor Sobel, Senate bill sponsor, said, “This is landmark legislation in terms of improving Florida’s child welfare system. We worked tirelessly during session to hear from advocates and experts from around the state to ensure the needs of vulnerable families were being met and the changes in this bill will strengthen our approach to helping Florida’s children and families. Thank you to Governor Scott for signing this remarkable legislation.” Senator John Thrasher said, “Governor Scott signing this historical child welfare bill shows his steadfast support for the families and children our state is called to serve. This important new law allows DCF to make strategic improvements to further the goal of protecting Florida’s most vulnerable.”

Senator Denise Grimsley said, “Ensuring the safety of our state’s children is our first and most important priority. It is incumbent on us to never stop trying to improve, and this legislation starts us down a path of learning from mistakes, particularly child fatalities, and ensuring our communities participate in making sure services are in place for those children and families most at risk.”

Senator Aaron Bean said, “My colleagues and I stand with the Governor in his support and signing of SB 1666 strengthening our state’s protection of Florida’s vulnerable children. We are committed to seeing positive change and stopping even one more child in Florida from falling victim to abuse and neglect.” Senator Joe Negron said, “I thank the Governor for seeing the value of protecting at-risk children in our state and focusing attention on improving child welfare practice. I look forward to seeing these changes implemented and the positive progress that will result.”

Speaker-Designate Steve Crisafulli said, “Child welfare requires a community and statewide effort and this legislation clarifies how agencies will work together to respond quickly and systematically to child deaths resulting from abuse or neglect. Improving our response must be an ongoing and urgent commitment. SB 1666 takes important steps to protect our most at-risk children by enhancing the quality of our child protection workforce as well as increasing the transparency and expert review of the child welfare system so needed improvements can be made more rapidly and save children’s lives.”

Representative Marti Coley, Speaker Pro Tempore, said, “I can think of few worthier causes than raising standards and best practices to protect Florida’s children who suffer from abuse and neglect. I thank Governor Scott for signing this bill and commend the legislative teams, state agencies and advocates who worked so hard to see these changes come to fruition.” Representative Gayle Harrell, House bill sponsor, said, “This legislation puts child safety first, which puts all our efforts in perspective. This legislation also will improve the services necessary they need to grow up and become successful. It is part of the coordinated approach we have taken this year and is the last of the three bills we have passed to protect children. Our children will be much safer as a result. I applaud Governor Scott for signing this bill into law today.”

Representative Seth McKeel said, “I applaud that this legislation addresses the high caseloads DCF has been working under and provides more child welfare positions to give investigators more time to spend on each case. Every abuse or neglect case is complex and involves hours if not days of work to ensure the right services are provided and the right decisions are made.” Representative Matt Hudson said, “Increasing the number of child protective investigators with social work backgrounds can only enhance the system and bring another dimension to this important work. This legislation helps make that possible with financial incentives and support to reward those who choose this worthy career.”

Representative Richard Corcoran said, “The child welfare bill being signed into law today puts the needs of Florida’s endangered children first by improving case practice and making sure their best interests are being served. I am pleased my fellow legislators put such hard work into this bill, and I stand with the Governor in signing it today.”

Kurt Kelly, CEO of the Florida Coalition for Children, said, “This legislation makes the safety of children paramount. From the time we transitioned to a community-based care system in Florida, lawmakers have shown their commitment to investing in the protection and safety of children in our state. The Governor and the Legislature have now taken another step in the right direction with this legislation, ensuring we’re taking a long-term view of Florida’s child welfare system and the investment needed to keep children safe.”

Shelley Katz, Chairwoman of the Florida Coalition for Children Board of Directors and Chief Operating Officer of Children’s Home Society of Florida, said, “We commend Governor Scott and our Legislature for focusing on our state’s most vulnerable children during the 2014 session. The enactment of SB 1666 is an important step toward improving the safety and well-being of children who have suffered abuse or neglect and those who are at risk of such suffering. As we know more must still be done, our community-based-care and provider organizations look forward to continued partnership with lawmakers, DCF and our communities to create a premier child welfare system to best protect Florida’s children.”

Structures are now going up for the Super Bowl Experience at Julian B. Lane Park, on Tampa’s Riverwalk.