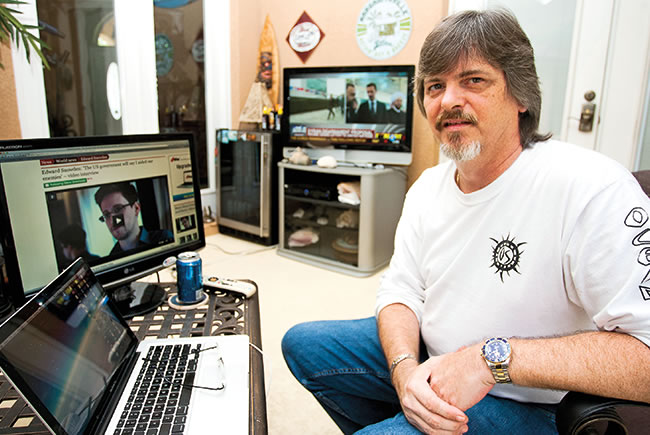 When Jeffrey Sisk learned last summer in the wake of the Edward Snowden scandal that the federal government was getting easy access to the internet activity of Americans, his first reaction was anger.

“To me, this is probably the biggest violation of our liberties as Americans that has happened since the founding of our country,” says the Citrus County resident. “I was so mortified that our search data was ending up in a government computer that I had to do something about it.”

The serial entrepreneur turned his anger into a business — a search engine called Zeekly.com. that, unlike Google and many other search engines, does not store the metadata of its users. If the government comes calling for a user’s search history, Zeekly can’t comply because its server doesn’t keep the data.

The site, which is still less than a year old and gets revenue from selling ads, is getting about 2 million page views a week. Zeekly is among a group of privacy-oriented search engines that have been aided by Snowden’s revelations. The largest, DuckDuckGo. Com, gets more than 4 million visitors a day — nearly four times more visitors than it had a year ago.

Sisk, 50, who also created Physician- Work, a job site for doctors, is working on a deal, which he says he’ll announce later this year, that he says will elevate the site from a “labor of love” to “a very serious player in the search space.”

Casey Suarez is the new vice president of distribution for Publix Super Markets, replacing Richard Schuler, who retired in May. Suarez had been Publix’s director of warehousing.

Fifth Third Bank’s Brian Lamb, the bank’s top executive in Tampa Bay, has been given the added responsibilities of managing the bank’s central and north Florida operations. Lamb, who joined the bank in 2006, will remain based in Tampa.

Julie Townsend has been appointed executive director of the Downtown Lakeland Partnership.

BROOKSVILLE — Baker Parts, a Massachusetts company that makes industrial baking equipment, will lease 24,000 square feet at the Brooksville-Tampa Bay Regional Airport and Technology Center. The company will get Hernando County incentives totaling $90,000 if it creates 30 jobs within the next three years.

MANATEE COUNTY — Port Manatee is applying for a $100,000 federal grant to study the feasibility of deepening the port’s shipping channel from 40 feet to 45 feet.

OLDSMAR — Looking to increase business in California, technology company Vology has purchased the California-based division of Govplace, an IT provider headquartered in Virginia.

PASCO COUNTY — The state says it will commit $128 million to widen parts of I-75 through Pasco County. The fi rst phase involves widening an eight-mile stretch of the interstate between State Road 52 and the Hernando County border.

PINELLAS COUNTY — Construction is under way on Largo Medical Center’s freestanding emergency department. The $8-million facility is being built on the site of a former auto dealership in Clearwater.

POLK COUNTY — TECO broke ground on a $700-million expansion of its Polk Power Station. The project, scheduled to be completed by 2017, is designed to boost the plant’s capacity by another 450 megawatts or enough electricity to power 100,000 homes.

Mayor Rick Kriseman’s projection that the city would complete construction on a new pier attraction by 2015 appears to be optimistic. A Krisemanappointed task force has suggested the project won’t open until at least 2017. Meanwhile, the existing pier building is closed, although the pier itself has been reopened to pedestrians.

TAMPA BAY — The Tampa Bay Times won a 2014 Pulitzer Prize in the local reporting category for a series of stories exposing poor treatment of homeless people by Hillsborough County’s homeless assistance program. The newspaper, which also won a Pulitzer in 2013 for editorial writing, has now won 10 Pulitzers.

Living near the Lee Roy Selmon Expressway in Tampa, Walker Peek had trouble sleeping because of the traffi c outside his bedroom window. The problem spurred an idea and a business: Residential Acoustics. The year-old company, which is getting help from USF Connect’s Tampa Bay Technology Incubator, manufactures window curtains that absorb and refl ect sound. The company, which employs six, received a provisional patent last year. Peek, the company’s CEO, has engineering degrees from the University of Florida and Columbia University.