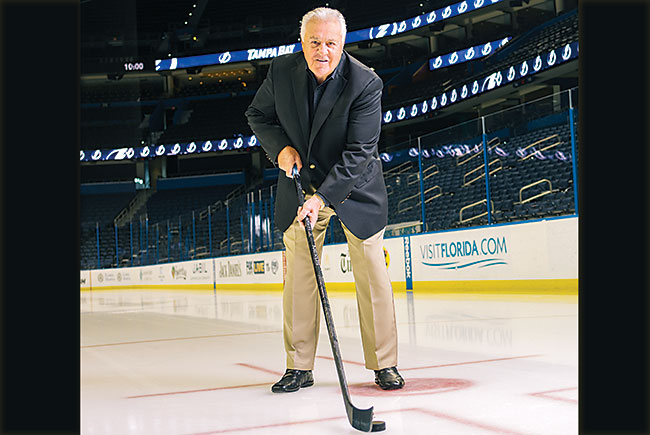 I loved playing hockey. It was orgasmic. Seriously, I felt such elation when the puck went in the net.

My forte was being mentally strong. The only thing I wasn't disciplined at was marriage. I was terrible. I was. I admit it. Nothing came before hockey — not my wife, not my kids, not my mom and dad. If it's wrong, it's wrong. I don't regret it. It's the way I am.

Everybody thought I was nuts trying to bring hockey to Florida. But to me, Florida is paradise, and why wouldn't you want to be in paradise? People told me it's football country. They love football. They love wrestling. They love boxing. They love car crashes. Well, we got all of that in hockey!

My daughter was tops, no doubt about it. It's coming up on three years from when she died. How do I deal with it? You just do. Was I the best father? Probably not. Could I have been better? Absolutely. We can all say that. I had to live my life, and she had to live hers. That's how I deal with it.

I liked John Kennedy. His brother Teddy, I didn't care for too much, and I knew him personally. I knew him a little too personally.

Last Christmas Eve, I'm shopping at the mall and I see these two kids, 13, 14 years old, and they're keying my car. They're maybe 40 or 50 feet away and I yell. They start taking off, and I start running after them. Then I stopped myself. I said, ‘What the hell am I doing?' If I get them, and I touch them, I'm in trouble. Or, what happens if they pull a knife and stab me for Christ's sakes. I get too passionate sometimes and I've got to calm down.

For me, I think we overprotect our kids way too much. The last straw for me, I was walking in my neighborhood and I see this kid, maybe 3 years old, a little girl, on a tricycle. She's got a helmet, elbow pads and shin pads — on a tricycle! I said to the lady — I couldn't help myself — ‘don't you think that's a little overkill?' Maybe I should have minded my own business, but when I see things like that, it just gets me going.

I'm one of these guys when I put my mind to something, I'm going to get it done. I'm going to keep on going until I've exhausted every avenue and then I'll cheat and lie a little to get it done. I guess I get that from my grandfather on my mother's side. When I was growing up, this son of a bitch would put dollar bills on a clothesline and he'd pull it up and my brother and I would try to reach up and grab the money and he'd pull it up a little higher. But I kept trying, boy. I fooled him one time. I put my brother on my shoulders and we reached it.

I'm a television freak. I'm a big fan of the Discovery channel and the History channel.

I started working in a steel plant when I was 15. When I turned 16, I got my driver's license and drove trucks at the plant — the tires were taller than I was — and bulldozers. I did that every summer until I was 30 years old. People don't realize that we didn't make enough money playing hockey to survive, so in the summer we worked. The year I scored 76 goals I made like 18 grand or something.

My daughter wasn't feeling well six weeks before she died. She needed an MRI, but she was living in Germany and she said she had to wait nine weeks and drive an hour to get it. I said, ‘Are you kidding me? I'm sending you a ticket. ' She said, ‘What am I going to do with the kids?' Her husband was in the Hague coaching at the time and the kids had hockey practice and she had to drive them all over, so she kept going. I was honestly three days from going over there and getting her myself when she died. She had an abdominal aneurysm and bled to death internally.

I'm not a fan of health care the way Obama wants it because I grew up in Canada. You only have 36 million people in Canada and they're bankrupt with it. How the hell are we going to support this?

You don't need a piece of paper with me. If I give you my word, I'm going to do it. It cost me my job in New York, by the way, when I was GM of the Rangers. They wanted me to trade this guy, and I wouldn't because I gave the guy my word that I wouldn't trade him, so they fred me.

I love going to Boca Grande. I can do without fshing, but I like laying out on the beach, my wife and I. I've been a lucky guy. I got married again, which I never thought I would, and she's a terrifc woman. She actually works. She's the frst woman I've been with who has a job.