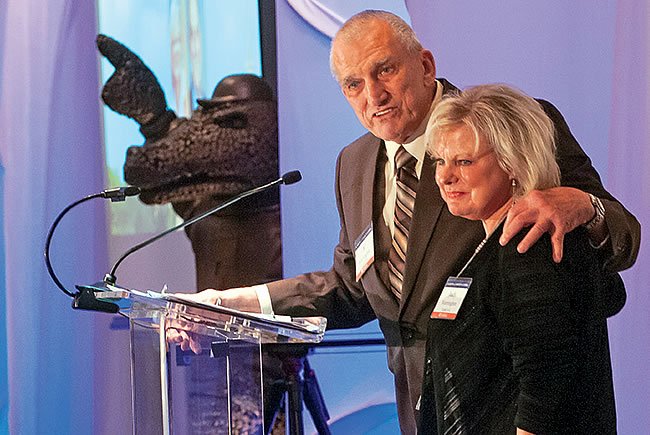 Fifty-six years after graduating from the University of Florida's business school, Al Warrington wanted to give back to the university that launched his business career. He and his wife, Judy, wrote UF a check for $75 million, a record donation that makes the Warringtons, who now live in Miami, the first $100-million donors to UF.

Warrington founded Sanifill, which merged with the company that ultimately became Waste Management. His donation goes a long way toward the university's goal of doubling its business school's endowment of $165 million.

UF business school Dean John Kraft says the money won't go toward hiring more professors or renovating the school. It will be spent instead on supporting faculty and paying the costs of their research. "Al was looking to support the existing faculty," Kraft says. "The idea is it's not about getting bigger but continuing to get better. "

Having an endowment dedicated to supporting research helps UF not only to keep faculty but also to recruit professors. "It allows us to do a lot of things we don't have the state budget to do," Kraft says.

The Warringtons' donation puts them in rare company in Florida. Florida State University's top donor, DeVoe Moore, gave the school $53. 4 million. At the private University of Miami, the Leonard Miller family has given $100 million.

UF President Bernie Machen says the Warringtons' gift is intended to attract more big donors. At a news conference announcing the gift, Machen said: "We have other donors out there who have not given at that level, but they could. "

Hardeep Gulati is the new CEO of Gainesvillebased SumTotal Systems. Gulati had been COO.

Richard Burke is the new CEO for St. Johns County-based Advanced Disposal. He replaces Charles C. Appleby, who will retire on July 1.

This time next year, Jacksonville residents will be able to buy a ticket to cheer on a local professional soccer team. The Jacksonville Armada FC, a nod to the area's Spanish and naval heritage, is part of the Miami-based North American Soccer League, a division II league that's a tier below Major League Soccer.

Jacksonville businessman Mark Frisch and former MLS player Dario Sala are the team's owners. The team will likely play at either the University of North Florida's stadium or the Baseball Grounds of Jacksonville until a soccer stadium is built — targeted for the 2018 season.

The move is a risky bet because the city has struggled to build a fan base big enough to make teams profitable. Two hockey teams and a lacrosse team have failed in Jacksonville in the last two decades. Jacksonville Armada FC's owners cite studies that show more than 250,000 soccer fans in the area.

CLAY COUNTY — Aldi, a German grocer known for no frills and low prices, plans to build a store in Middleburg.

GAINESVILLE — The Fountain of Youth Archaeological Park will donate 97,000 artifacts worth an estimated $3. 5 million to the University of Florida's natural history museum. The artifacts date back more than 400 years. > UF alumnus Andrew Banks and his wife, Pamela, will donate $5 million to develop endowed chairs at the university. It's not clear yet which colleges will receive the new faculty positions, but the donation is meant to support the university's efforts to improve its national ranking. > Shadow Health sold an equity stake worth $200,000 to the Florida Institute for the Commercialization of Public Research. It is the frst company to receive funding through the new equity-based program. Cox Communications will eliminate 42 jobs from its Gainesville offce as part of a plan to relocate call center jobs to other locations.

HAMPTON — The 500-population town of Hampton, between Jacksonville and Gainesville, has been spared from extinction. The Legislature considered dissolving the town, known for being a speed trap, after an audit revealed fscal irregularities but backed off after the town crafted a plan to improve its fnances.

JACKSONVILLE — First Florida Credit Union and State Employees Credit Union, both based in Jacksonville, are working toward a merger that could be completed in July. The resulting institution would be among the top 20 Florida-based credit unions with 60,000 members and more than $700 million in assets. > Connecticut- based Cenveo will lay off 133 from its envelope manufacturing plant in Jacksonville, according to state flings. Jacksonville banker Christopher David Boston pleaded guilty to embezzling $10. 5 million from Fifth Third Bank, where he worked. The 963-room Hyatt Regency Riverfront in Jacksonville was sold for $53 million to Fortress Investment Group. Convergys will lay off 250 in Jacksonville, according to flings with the state. It employs 1,200 in the area. > The Jacksonville Zoo and Gardens will build a $1. 5-million critical-care center for endangered aquatic mammals, like manatees. There are only three other similar centers in the state.

OLUSTEE — Hill Truck Rental Foundation donated $1 million to the Olustee Battlefeld State Park, site of a Civil War battle in which there were 3,000 casualties. The money will be used to build a museum at the park.

ST. JOHNS — The 16- bed EPIC Recovery Center opened in February, the frst detox center to open in the county since the 1980s. > Flagler Development has sold a large tract of land on U. S. 1 to Jacksonville real estate developer Tom Jones and Dallasbased Hunt Cos. For $6. 2 million.

Jacksonville's tallest downtown offce tower, the Bank of America building, is for sale. The 42-story building was last purchased by Parmenter Realty Partners for $75 million in 1999.

Members of the Tampa Bay Lightning hockey club had a boat parade up the Hillsborough River to celebrate their Stanley Cup win Wednesday, Sept. 30, 2019.