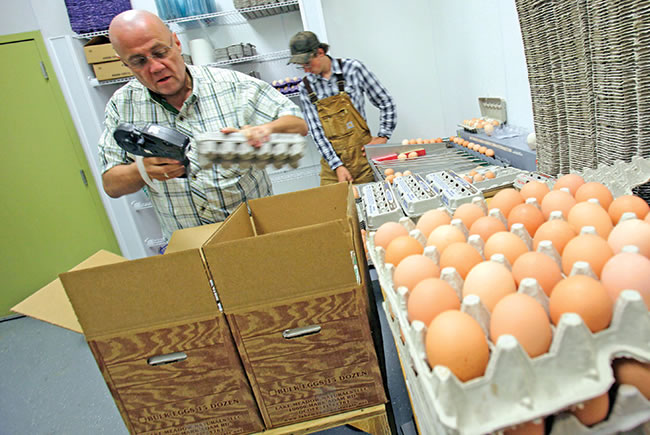 West Orange County is well positioned for the eat-local trend.

Award-winning restaurants in downtown Winter Garden serve lettuce, herbs and greens that are grown in a rooftop hydroponics garden just yards away from the restaurants. Eggs gathered by hand and cage-free poultry come from a small family farm in nearby Ocoee that also sells to chefs in Orlando, Winter Park and Walt Disney World area hotels who have embraced the "close food" movement — buying locally grown or raised food products.

Commercial vegetable farms and citrus and foliage nurseries have had roots in west Orange for generations and still thrive today, if on a smaller scale. The movement favoring locally sourced food has been a boon for small farms such as Lake Meadow Naturals in Ocoee and Green Sky Growers, with state-ofthe- art hydroponics atop a threestory building in Winter Garden.

The soil-less garden operates year-round regardless of weather, yielding a consistent supply in small batches for nearby restaurants such as Sweet Traditions Cafe and Bakery.

Green Sky also raises tilapia, the popular, mild-flavored fish, in aquaculture tanks adjacent to its greenhouse of veggies, herbs, berries and edible flowers, all interconnected with a rainwater-collection and water-recycling system.

West Orange is a key source for Homegrown Local Food Cooperative, a non-profit in Orlando that markets more than 500 products grown or produced within 100 miles. The member-owned co-op gathers from almost 50 farms, including Lake Meadow Naturals and Green Sky Growers, for pickup at its downtown center or for local home delivery. About a fifth of the participating farms are in west Orange, such as Apopka, where Grower Jim harvests 53 types of fruits and vegetables grown without chemicals, and in Zellwood, where Monterey Mushrooms grows and packs fresh mushrooms.

Seminole County Manager Jim Hartmann is leaving to become manager of Wake County in North Carolina, where he will earn base pay of about $220,000. Wake, which includes the capital of Raleigh, is twice the size of Seminole County, where Hartmann earned about $185,000.

BREVARD COUNTY — Port Canaveral is in discussions with NASA and Kennedy Space Center about the possibility of using rail lines on KSC property for a link to the port that could boost its cargo operations. In testimony to a congressional subcommittee, port CEO John Walsh predicted that with rail connections, expansion and cooperative programs, the port could create 5,000 "livingwage" jobs within seven years, and at least 10,000 jobs within 15 years.

LAKE COUNTY — Freight trains can travel a bit faster on tracks running from Lake County into west Orange County as a result of an $18. 4-million upgrade. More than 20 miles of new track and cross-ties were funded by federal, state and county dollars and contributions from Florida Central Railroad and the cities of Tavares, Mount Dora, Eustis, Winter Garden, Ocoee and Apopka.

LAKE MARY — A $3. 5-million, 32,000-sq. - ft. Offce and retail building is planned for a site adjacent to the new SunRail commuter train station. Plans call for Station Pointe at Lake Mary to be under construction next year with a coffee shop, sandwich shop, drugstore, dry cleaner and beauty salon in addition to professional offces.

LAKE NONA — Pulte Homes has started work on The Enclave at VillageWalk, with 144 sites and homes from the $600,000s to more than $1 million. > Tavistock Group, developer of Lake Nona in east Orlando, is starting work on the frst phase of its town center, a $150-million project that includes a hotel, offces, restaurants, a parking garage and apartment complex.

MOUNT DORA — City offcials are studying the long-range possibility of developing more than 1,000 acres for a major hub for light manufacturing and professional offces after the new Wekiva Parkway, now under construction, opens to traffc in east Lake County in 2019.

ORANGE COUNTY — Sales of luxury homes rose 40% in the four-county metro Orlando area last year, according to a survey by Stirling Sotheby's International Realty. Nearly 1,400 homes sold for more than $500,000, with Orange County accounting for more than two-thirds of the sales. Lockheed Martin plans to add about 200 engineering jobs at its Orlando simulation and training unit, which already employs about 1,700 in east Orange County, to help with fight-training simulator programs for fghter jets.

ORLANDO — Nemours, one of the nation's leading pediatric health systems, purchased fve After Hours Pediatrics Urgent Care centers in the Orlando area and has renamed them Nemours Children's Urgent Care. The centers are in Altamonte Springs, Dr. Phillips, Hunter's Creek, Sanford and Waterford Lakes. > With Florida facing development pressures and the need for infrastructure upgrades, the Urban Land Institute's annual statewide summit this year takes on signifcance. The conference, June 12-13 at Walt Disney World's Swan Resort, will host hundreds of development professionals and land-use experts. Universal Orlando plans to add nearly 3,500 jobs this year with expansion at the Wizarding World of Harry Potter, CityWalk entertainment zone and the addition of Cabana Bay Beach Resort hotel. > Philanthropist Bryce West pledged $300,000 to develop a music therapy program for Orlando Health patients. Marilyn Monroe Spas, an Orlando-based startup founded by former top Disney executives, has opened a nail boutique in Mills Park and plans to open another one in Winter Park this year and a day spa in the Grove at Isleworth. The company was founded by Al Weiss, former president of Walt Disney World, and Niki Bryan, former head of Disney's resort spas.

WINTER PARK — The city unveiled its new $1. 2-million train station, which will be used by Amtrak for interstate passenger service as well as the new SunRail local commuter train. Winter Park is one of 12 stops along the frst phase of SunRail from Volusia County to south Orange County beginning service this spring.

With commercial construction rebounding, Orlando-based Crane Rental invested $14 million in new equipment during the fourth quarter, including one crane that can handle 825 tons and another that lifts 600 tons. The company, founded in 1960, now has more than 100 cranes for commercial construction projects nationwide as well as in the Bahamas and Caribbean. With demand surging, Crane recently boosted its staff by 10% to more than 110 employees and opened a full-service office in Tampa and a satellite office in Davenport.

In 2019, Florida Gov. Ron Desantis appointed the state’s first-ever chief resilience officer. Julia Nesheiwat shares the lessons she brings to the position from her time in the military and academia.

Change could be coming to Weeki Wachee -- to the river, the state park, the city and the roadside attraction that bear its name and have drawn people to this natural wonder and iconic mermaid show since 1947.

The stock market soared in 2019. Not all Miami-area public companies kept up

Many of the large, publicly traded companies that call Miami-Dade and Broward home kept up with the broader market gains. But not all.

The renovated South Beach Ritz Carlton will reopen after being damaged by Hurricane Erma and in time for the Super Bowl at hard Rock Stadium, January 16, 2019.