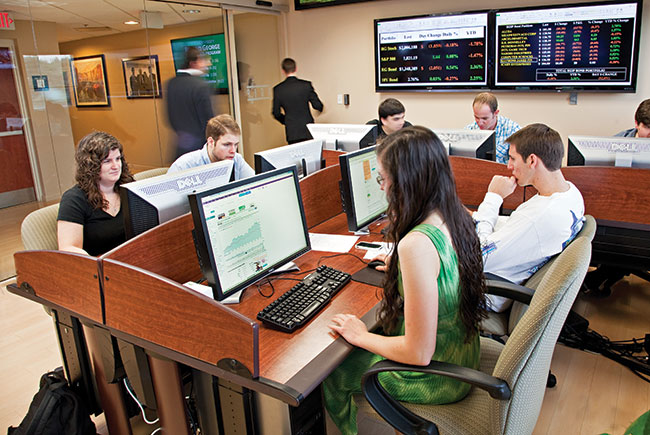 "How many parents will give their kids $3 million of their retirement money to manage?" asks K.C. Ma, director of Stetson's George Investments Institute.

When K.C. Ma first meets with parents of students in Stetson University's investment management program, he asks them a simple question: "Would you trust your children to manage your investment portfolio?"

For 34 years, the private university of more than 3,000 students in DeLand has been entrusting a group of students with the responsibility for a special endowment fund seeded with $500,000 and unconventional thinking.In 1980, Sarah George offered to fund an endowment in memory of her husband, Roland, with the condition that students, not professional fund managers, manage the money. An engineer who took up investing after he retired, Roland often lamented to Sarah that he wished he had started earlier and thought it would be Wise for young people to learn to invest.

Since its inception, the Roland George Investments Program's fund has grown to $3.2 million — noteworthy since the university takes 5% a year for expenses. Since 2000, it's grown by 200%.

The funds, which try to maintain a 50 / 50 balance of growth and fixed-income asset allocation, have averaged an annualized return of 8.5% over the last 14 years, Ma says. Meanwhile, he adds, the benchmark for a fund with half of its holdings in the S&P and half in Treasury bills has realized a 5% annual return over the same span of time.

Criteria to enter the program include finance and investment courses and a 3.0 GPA.Ma vets all applicants, and 20 to 25 upperclassmen make up a Roland George class each year.

Those selected for the program spend a good deal of time in the program's "trading room," a glass-walled space, accessible by key code, that features six high-definition TV screens streaming financial news and real-time results of the fund's holdings.

Another flat-screen TV provides a constant reminder of the program's high standards — a List of Stetson's 16 first- and second place finishes in the RISE and GAME national student-investment competitions.Since the inception of the RISE (Redefining Investment Strategy Education) contest in 2001, Stetson has garnered 10 first-place finishes. It has three top honors in GAME (Global Asset Management Education) since that competition began in 2011. All but four of the victories were in the competitions' fixed-income categories.

About 50 universities enter each competition. Both competitions rank schools in various categories by their portfolio's risk-adjusted performance over the previous calendar year. For example, the school's bond fund yielded an 11.7% return for 2012, making Stetson the 2013 champ in both the RISE and GAME fixed-income category. Ma says the bond fund's benchmark is the 10-year Treasury bill, which yielded 3. 2% in 2012.

The program also has four wins in the competitions' stock categories, the most recent being for its "core stock" performance in the 2012 GAME competition.

"Stetson's done an outstanding job," says David Sauer, who founded RISE while at the University of Dayton in Ohio and now runs GAME at Quinnipiac University in Connecticut. Sauer, a professor of finance, says he has seen an increase in the number of universities offering student-investment programs, but "it's still distinctive for a group (of students) to be managing over a million dollars."

Students in the George program work both together and individually To research stocks and bonds for the program's portfolio, which holds 25 stocks and 10 bonds. They make buy and sell recommendations to a seven member board made up of Ma, the dean of Stetson's school of business administration, a university trustee and four George students.

The board accepts about 25% of the recommended stock buys and approves one out of five bond picks, Ma says.The minimum purchase for stocks is $50,000; for bonds, $100,000.

Classmates spend the first half of a school year researching and managing stocks, with the final semester dedicated to bonds and managing the stock portfolio.

Among the high-profile holdings in the stock fund are Apple, Walt Disney Co. And Halliburton. A George class purchased Apple in 2007 when the computer firm's shares were trading in the $90 range. Apple's stock price has since soared above $700 per share and recently traded around $520.

Ma, a hedge fund manager in De-Land with a doctorate in finance, says he encourages his students to look past the usual market darlings and find the diamonds in the rough, the "neglected" stocks that could become the next Panera Bread or Zillow.

In late 2012, a George student persuaded the program's board to buy stock in Zillow, an online real estate information marketplace, then trading at $36 per share. The company was poised to take off, the student said, citing a recovering housing market, strategic partnerships and other research supporting his recommendation.

A week later, Zillow's stock plummeted 38% on the news that the company would lose a major advertiser. The student who recommended the buy couldn't escape his classmates' good natured ribbing. Zillow became a verb in the trading room, used to mean something bad had happened, as in, "Man, my girlfriend just zillowed me!"

Some in the program thought about dumping the stock, but after doing an analysis of the company, Ma and the Student recommended holding on to it.Wise move: Zillow's shares rebounded, breaking the $100 mark last summer. It recently traded around $80.

When George students graduate, Ma offers them these parting words: "Make your first million before you're 25."

Vitorrio Fratta, one of Ma's former students, admits that it took him a little longer to earn his first million. But he's made seven figures a year since turning 29. Now 32, the former Roland George Merit Scholar and class of 2005 Stetson grad recently left ICC Capital Management's Walnut Creek, Calif., office to start his own investment firm in the San Francisco area.

Like many George students, Fratta tapped Stetson's alumni network to find a job after graduation. He joined ICC's Orlando office, where three Stetson grads were already working. A promotion to assistant portfolio manager took Fratta to Northern California, where he saw his bonus compensation take off along with the value of the ICC institutional fund he co-managed.

One investment decision alone made the fund $40 million, Fratta recalls. In 2008, when oil was trading at more than $140 a barrel and the economy was in shambles, Fratta made a series of buys in American Airlines, whose stock was trading in the $4-to-$5 range, betting oil prices had peaked and would soon fall. Within a few months, oil plummeted to about $45 per barrel, and American's stock, of course, took off in the other direction, surpassing $12 a share when Fratta sold it.

The George program, with its real world, real-money setup, is a career maker, he says. "It teaches you to do research, defend your ideas and communicate," Fratta says. He says he also benefited greatly from a summer internship at KCM Asset Management, a $300-million hedge fund run by none other than professor Ma. Just three blocks off campus, KCM's office is stocked with George alumni.

"I get the best," Ma says, smiling as he adds that his fund has yet to beat the George program's annual returns.