Florida is home to more university research parks than any other state in the nation. These research parks create high-skilled, high-wage jobs, usually in the STEM fields (Science, Technology, Engineering, and Mathematics), and retain talented Florida university graduates. Their members also provide an exchange of technologies and best practices among all parks through the Florida Research Parks Network (FRPN).

The nine university research parks, located throughout the state, attract companies from a variety of industries, including aerospace, cyber security, pharmaceuticals, modeling and simulation technologies, and information technology. The largest of these parks is the Central Florida Research Park (photo below), which is also the fourth-largest in the United States by number of companies, and the seventh-largest by number of employees, with approximately 10,000 employees. 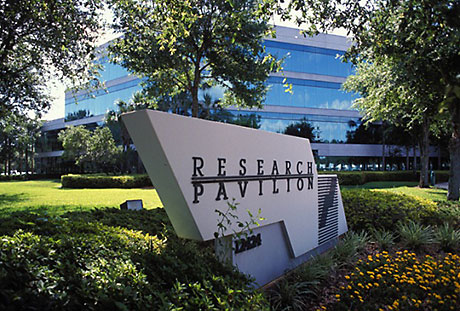 Likely the most well-known university research park in North America is the Research Triangle Park in North Carolina. Started in 1959, the Park was an experiment in changing an entire state’s economy by investing in the collaboration between universities, the state government, and the private sector. Research Triangle Park remains the largest in North America, one of the largest in the world, and one of the most successful. Many current research parks are modeled on this innovative collaboration.

Research parks host growth-stage and mature companies that benefit from enduring linkages to a university. Affiliations take many forms from sponsoring research, and employing interns, to teaching at the university or being part of an industry advisory council. Many research parks also host incubators that typically concentrate on recent research and often have research laboratories present on the facility. Research parks link researchers and “technology generators” with the marketplace. However, what makes university research parks different from other technology parks, according to a 2013 Association of University Research Parks (AURP) report,1is that these are usually developed by, or in collaboration with, a leading researchinstitution, such as one or several universities, a national laboratory, or another source of technology. Research can be developed by university faculty, students, graduates, and community members.

Although university research parks and incubators offer varying services to their tenants, many offer help to companies in the form of relationship building between the companies and researchers, help with business planning, and access to capital providers. The AURP survey indicates that critical to the overall success of the park is the commitment of the leadership of the associated university, as well as the acceptance of the local economic development community.

The survey also indicates that research parks have as their primary objectives “to create an environment that encourages innovation and entrepreneurship,” followed closely by the response of “offering a place for faculty and students to work with industry.”

The quantitative results of surveys show that, on average, each incubator produced nearly 9 new businesses that had graduated from their program over the past 5 years. Further results show that 26 percent of the graduate businesses had stayed in the affiliated research park and 43 percent remained in the same region. Other interesting findings include that only 12 percent of companies left the region of the research park and only 19 percent were no longer in business. This is a much better survival rate than the average startup company, whose 5-year survival rate is less than 50 percent.

Private-sector employment in the university research parks in North America averages 79 percent of the total. Only 10 percent are college and university-funded, and around 9 percent are government jobs. The Battelle report indicates a jobs multiplier of 2.48, showing that these types of jobs in university research parks have a substantial multiplier effect and create jobs in other categories with indirect and induced demand.