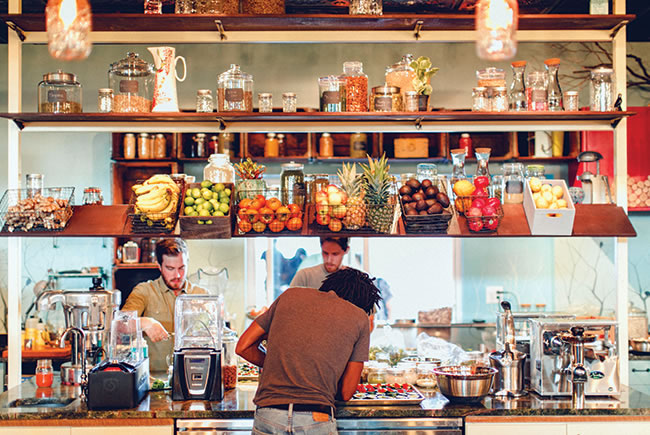 Skybird Juice Bar is one of about 20 merchants in the East End Market in the Audubon Park neighborhood of Orlando.

Food markets off the beaten path

Across Florida, entrepreneurs obsessed with good food and craft beer have created new restaurant rows that are reviving older neighborhoods.

The menu at East End Market in Orlando just won't quit, which is the point.

East End grows small crops of organic vegetables out front and a big crop of small businesses inside photographers, landscapers, antique dealers and most of all, food and drink startups.

Urban farmer, developer and market-explorer John Rife and fellow food activists have rebuilt a former church into a double decker of artisanal entrepreneurism complete with a windmill.

It has two kitchens and a dining room used by caterers; Cuisiniers, the home of chef/caterer Jamie Mac- Fadden, and an incubator kitchen where culinary startups can experiment. Plus another dining room and third kitchen for Txokos, a Basque restaurant opening this winter.

East End calls itself the culinary and social hub of central Florida; indeed, the neighborhood of Audubon Park is an incubator of edible, potable hipster creativity.

Once the Audubon Park Garden District was only modest houses and convenience retail a dozen blocks from any main drag. Now it hosts the city's hippest weekly market and the intersection of Corrine Drive and Old Winter Park Road is at the heart of a convergence of cupcakes, bakeries, bikeries and alternative enterprises.

The 6-year-old Bikes Beans and Bordeaux sells bike wear and hosts almost daily rides, whips up lattes, pours wine by the glass and serves organic dishes named for famous races and racers (the Lancewich is no longer). Newest in the neighborhood is The Smiling Bison with duck pizza and bison burgers served with pumpkin-farro salad.

You can also try vanilla black pepper cupcakes at Blue Bird Bake Shop or get a passport to the endless beer list at Redlight Redlight, a world-ranked beer parlor.

Chefs and artists who colonized Midtown and the Design District have moved into grittier Wynwood, where bold colors blaze on graffiti-covered walls as well as in studios and galleries between North Miami and NW 2nd avenues.

The key fuel is food and drink, especially Panther Coffee's precision espresso (East Coast or a more acidic West Coast blend) and a clientele of poets and fashion models lounging in the sun and on the concrete.

Food is a mash-up, too, and always handsomely designed. The Butcher Shop Beer Garden & Grill is a retail meat market, restaurant and bar while Cafeina is a cocktail hideaway with modern tapas and a large gallery space. At Wynwood Kitchen & Bar, huge artwork makes indoor and outdoor spaces pop with more color than its ceviches or pico verde. Jimmy'z menu runs from salad nicoise to mofongo seven ways.