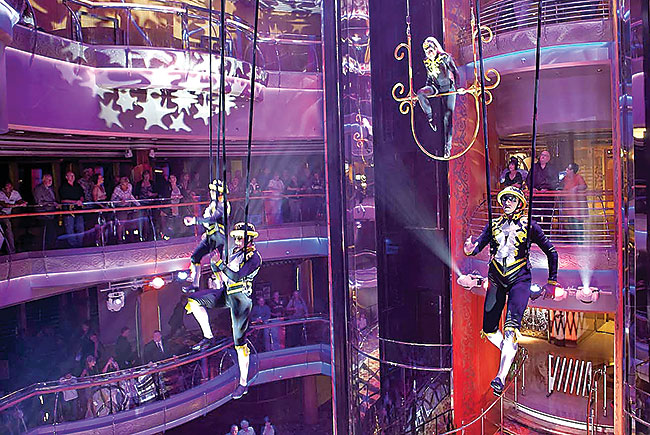 Shipboard performers on board a Royal Caribbean cruise.

In a public-private deal three years in the making, Royal Caribbean Cruises plans to build a $20-million, 130,000-sq.-ft. training facility for its shipboard performers on land leased to it by Florida International University.

When the rehearsal, production and performance space opens in early 2015, students in FIU's College of Architecture + The Arts and its Chaplin School of Hospitality and Tourism Management will have access to the facility and to at least 20 corporate and shipboard internships with Royal Caribbean.

Those studying lighting, set design, marketing and other technical and management areas of theater will work alongside the cruise company's staff. The cruise line will also share with FIU proprietary information for research purposes and teach alongside its faculty.

"It's tied to our academic mission. They will have state-of-the-art equipment and state-of-the-art facilities that we just could not afford on our own," says Brian Schriner, dean of FIU's College of Architecture + The Arts. "They will give us access to that — and access to their expertise."

The partnership required approval from several state agencies, the governor and multiple FIU boards. "The underlying real estate deal enhanced the curriculum and educational experience of FIU's students," says Alan Kleber, managing principal at Cresa South Florida, who represented Royal Caribbean in the deal. "I've been practicing in my business for 20 years (and) this is the most complex set of requirements I've had the privilege of working on."

CORAL GABLES — A partnership between Miami-based Alta Developers and Strategic Properties and New York-based Greystone & Co. Plans to build a 13-story rental apartment and retail project on a site that it purchased for $7.1 million. The company says it plans to invest more than $40 million in The Mile. Coral Gables Luxury Holdings paid $27 million for a 2.8-acre site on which it plans an $84-million project with 270 residences and 40,000 square feet of retail.

DORAL — A group of local investors led by real estate developers Jimmy Tate and Sergio Rok called off its deal to purchase and recapitalize U.S. Century Bank after the deal failed to receive regulatory approval and the bank didn't resolve a class-action lawsuit before the deal deadline of Dec. 31. U. S. Century Bank Chairman R. Alex Acosta says the bank has reached out to other interested investors and banks.

KEY WEST — The first commercial fight from Key West to Cuba in more than 50 years took nine passengers to Havana.

MIAMI — Miami-based Terra Group plans a 60,000-sq.-ft., 12-story, luxury home furnishings showroom near the Design District, set for completion by the middle of next year. Miami-based Related Group and hospitality company sbe have partnered to build the Hyde Hotel & Residences Midtown Miami. Projected to cost about $130 million and open in 2016, it will include 80 hotel rooms and 400 condominiums. Rahmi M. Koç, a Turkish boatyard owner, paid an undisclosed amount to acquire the former Merrill Stevens Dry Dock boatyard on the Miami River. He plans to continue operating it as a yacht repair facility. Hallandale's Gulfstream Park horse racing venue, horse breeders, horse owners and trainers signed an agreement to relocate a slot machine permit to Resorts World Omni's 14-acre bayfront property in downtown. Resorts World, which is part of Malaysia-based Genting Group, needs legal approval of the plan, and there is a dispute as to whether the gambling permit is for Broward or Miami-Dade. » Opko Health sold its share of San Diego-based Sorrento Therapeutics for $22 million.

MIAMI BEACH — Istithmar Hotels, the investment arm of Dubai World, sold its 50% stake in the Fontainebleau resort back to co-owners the Soffer family of Turnberry Associates. Although details of the transaction were not disclosed, it includes an agreement that the Fontainebleau will pay Istithmar a "gamings earning" if Florida legalizes gambling. » A New York-based affliate of HFZ Capital Group and CFSC Holdings paid $175.3 million to purchase the 309-room Shore Club hotel on South Beach from New Yorkbased Philips International and Morgans Hotel Group. » An affiliate of Miamibased developer Terra Group paid $65 million to purchase the 225-room Howard Johnson Plaza Dezerland Beach & Spa from Dezer Properties.

SURFSIDE — Miami-based Fort Capital Management, which owns the Surf Club, paid $36 million to acquire the 30-unit co-op Surf Club Apartments, which it plans to tear down.

WEST MIAMI — The Estate Cos. And Mattoni Group broke ground on the 206- unit Gables Gate Tower apartments. The developer expects to fnish the $35-million project next year.

New U.S. regulations have made it possible to solicit crowdfunding in exchange for small equity shares in everything from companies to products to real estate. Prodigy Network, a Manhattan- and Bogotá, Colombia-based commercial real estate crowdfunding firm, recently opened a 12-person office in Miami to take advantage of the new regulations. Prodigy has funded commercial properties in Colombia by taking investments as small as $20,000 and in the U.S. starting at $100,000. "We're looking for projects in Florida to apply crowdfunding to real estate," says Rodrigo Niño, Prodigy's CEO. The company, which has 45 employees, is on its fourth project. It has set a world record for crowdfunding for a Bogotá skyscraper, raising $175 million in equity from more than 3,800 investors.

New York-based Property Markets Group and Aventura- based S2 Development proposed Muse, a 47-story condo tower in Sunny Isles Beach that would comprise just 68 units, each with a sculpture by artist Helidon Xhixha.