Jacksonville International Airport had three fewer airlines last year than it did in 2007, according to an MIT study. 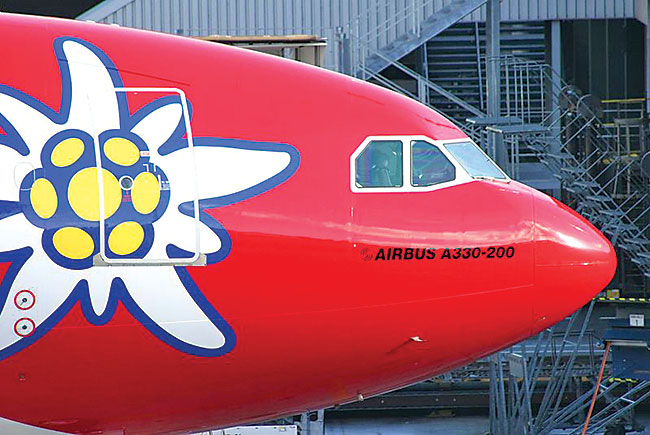 Edelweiss has begun flying out of Tampa International Airport.

The recession, airline mergers, rising fuel costs and an industry shift in favor of fuller, larger planes have taken a toll on domestic plane service to Florida cities. Local economies and government budgets have felt the impact, along with consumers who have had fewer choices. Florida’s three medium-hub airports, Palm Beach, Jacksonville and Southwest Florida Regional in Lee County, took some of the biggest hits, with declines in the number of domestic departure flights ranging from 15.4% to 25.8% from 2007 to 2012. At Palm Beach, for example, the number of domestic travelers fell by nearly 600,000 from 2007 to 2011. The three medium hubs still did better than the national average for medium hubs, which saw an average 26% decline.

The research on Florida comes from a study by the Massachusetts Institute of Technology’s International Center for Air Transportation of national trends in domestic departures, number of seats per flight and number of airlines serving each airport. Florida declines mirror the pattern across the nation, where large airports saw an 8.8% drop in domestic departure flights. Among Florida’s four large airports, Miami actually gained 1.1%, with losses at Fort Lauderdale, Orlando and Tampa, the smallest large-hub airport in the nation, ranging from 7.8% to 24.3%.

Meanwhile, Florida’s small airports are a mixed bag. Changes in traffic at those airports are summarized in the accompanying chart.

Industry changes boosted airlines’ health, but the reduced capacity is hard on individual airports, says Bruce Pelly, executive director of the Palm Beach County Department of Airports, which runs Palm Beach International. “Financially, we’re doing fine,” Pelly says, but “we cut back. We haven’t had salary increases at this airport in four years.”

Airports such as Palm Beach have responded by building data-driven cases for why particular carriers would do well opening routes to particular markets. They’ve offered incentives, reduced landing fees and discounted other rcharges, hoping either to lure new carriers or induce carriers to offer new routes. They’ve also promised advertising support from local convention and visitors bureaus and from their own budgets to ensure carriers have profitable passenger loads.

Getting around Florida by air got a lot harder after 2001. The number of intrastate flights fell to a low of 1,369 in 2011, down nearly 60% from 2001, according to the state Transportation Department. Miami, Tampa and Orlando, in that order, had the most intrastate flights in 2011.