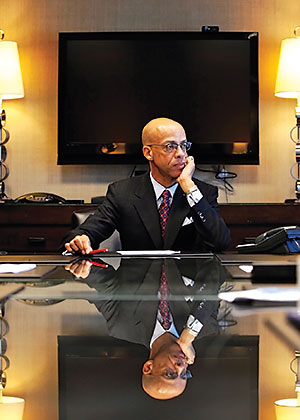 Priorities for Eugene Pettis, new president of the Florida Bar

Eugene Pettis hopes to impart a sense of service through his presidency of the Bar.

Before being sworn in this summer to lead the Florida Bar, Fort Lauderdale attorney Eugene Pettis spoke with Florida Trend about his priorities and becoming the Bar’s first African-American president.

» Priority: Pettis started work last year to launch the Florida Bar Leadership Academy, a priority of his. The academy enrolled its inaugural class of 59 in June. The attorneys — picked to represent racial, age, gender, ethnic, geographical and practice-area diversity — will gather six times a year.

“The curriculum focuses on what I believe are the necessary skill sets for individuals to become better lawyers. It gets into leadership skills, organizational skills, people skills, networking skills and knowledge of the critical issues that the legal profession is confronting. The dream is these individuals will take these talents home and become engaged in their communities and ambassadors of our profession.”

“The history of the state of Florida, the doors have not been open that long. My presidency is crossing a barrier. It’s significant because it’s a clear illustration of progress. It gives hope to others. When I was interviewing for my first law job in 1985, I can’t tell you the number of job interviews I had that the whole subject discussed was, ‘You’ll be our first African-American.’ We still had a lot of growth to make in 1985.”

» Values: In 1985, the year Pettis graduated from UF’s law school, his parents and his six siblings were flown to Washington, D.C., and honored by President Ronald Reagan as a “national family of the year.”

“When I was angry with mom, I would say, ‘I wish I was born to the family down the street’ because they let their kids do anything they wanted and we had pretty strict rules in our household. Dad was a waiter in a cafeteria and then spent the second half of his career as a maintenance worker at the post office. Mom worked as a maid and ended her career as a teacher’s assistant. Their occupations didn’t define their service or strengths. They were giving, community-focused people, with high moral values. Both have passed and, to this day, people come up to me and talk about the impact my parents had on their lives. Doing for others was instilled in us for as long as I can remember, sometimes against my will.”

» Being a lawyer: “If all I do is litigate, then I think I’ve missed a very important piece of the ride. I think a lawyer has skills that are very important to make a difference in society, skills of advocacy. Sometimes, we look too much at what is in it for me and lose the opportunity to do some good for others.”