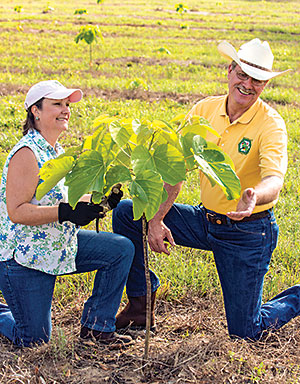 Tung oil was first produced in the United States in Tallahassee 100 years ago, derived from the fruit of seedlings brought from China by a U.S. ambassador. Over the following three decades, tung trees became regional insignia— their salmon-pink petals adorning murals, sports regalia and postcards — and tung nut oil became an industry, used for wood finishes, inks, paints, skin balm and other products.

Tallahassee claimed to be the capital of the Deep South’s Tung Belt. But then came hurricanes, freezes, concern over the nuts’ toxicity, cheaper foreign production and competing acrylic paints. “It was a slow collapse. The entire industry experienced a major setback,’’ says Tim Rinehart, plant molecular geneticist at the U.S. Department of Agriculture’s horticultural laboratory at Poplarville, Miss. Over 40 years of research, the facility has created hardier and higher-yield tung oil plants but has been awaiting a grower.

That’s where Greg Frost comes in. Frost, administrative services director for the Tallahassee Police Department, became interested in tung oil’s business potential after noticing a tung tree in his back yard. Impressed by a tung-based product for wood-finishing, he began delving into history — and launched Gulf Coast Tung Oil.
This spring, the USDA shipped 150 experimental seedlings to Frost. His earlier tung tree plantings on 50 acres in Leon and Jefferson counties could start producing within two years. “The oil has unique properties,” says Frost.

“It’s a sustainable product.’’ He thinks demand and prices will rise. Home-care products containing tung oil are widely sold. Also a factor: China — a leading producer along with South America — has successfully used tung oil as a biofuel component for a trial passenger flight.

“We think there’s a real chance for establishing a specialty market for tung oil,’’ says Rinehart.