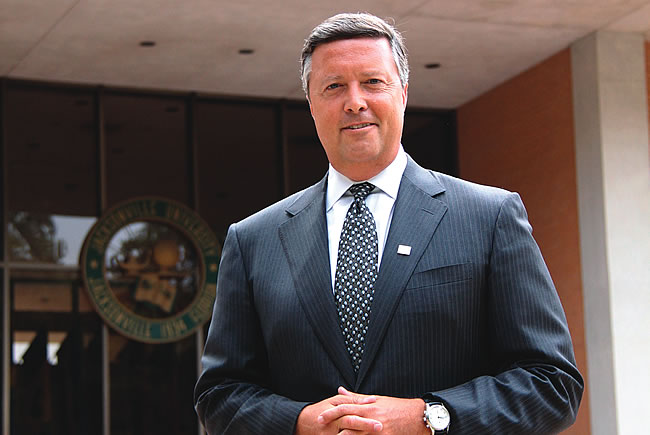 Tim Cost, Jacksonville University's new president, does not have a background in higher ed.

Jacksonville University is positioned for growth

Ten years ago, Jacksonville University was in crisis. Its president had resigned over badly managed finances. The school had multi-million-dollar budget deficits two years in a row and had to borrow money to stay afloat. It slashed jobs and benefits.

Kerry Romesburg was named president and assigned to clean up the mess. He not only fixed the college’s finances, but also helped expand the school to 3,900 students. The traditional liberal arts fare now includes graduate degrees in marine science and nursing and online programs.

When Romesburg decided to retire last year, Jacksonville University’s board of trustees wanted its next president focused more on growth than stabilizing finances.

The board hired one of its own: Tim Cost, a four-year member of the board of trustees, an executive at PepsiCo and 1981 Jacksonville University alum. Unlike other candidates, Cost has no background in higher education. But he offers plenty of private-sector experience, working as a senior manager for Aramark and Wyeth, among others.

“Kerry turned the tide on a school that had its problems,” Cost says. “But now we are at this inflection point where people have high expectations.”

His biggest priority is Jacksonville University’s $85-million fundraising campaign, the biggest in the school’s history. The campaign will fund scholarships and faculty research, a $20-million College of Health Sciences, acquisition of nearby land, new athletic facilities and a bigger endowment.

Unlike schools with big endowments, Cost says Jacksonville University relies on tuition for most of its funding, which hampers its ability to discount the $29,200-a-year tuition and attract students of a higher academic caliber. The average student pays about $19,000 a year after scholarships.

The university is already halfway to its $85-million goal. Jacksonville University trails peer institutions in alumni giving rates, Cost says. “We are looking at a 5% to 6% giving rate,” he says. “The good schools are anywhere from twice to three times that.”