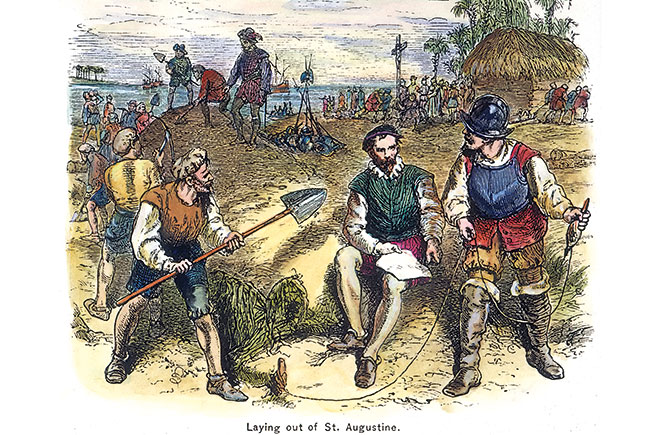 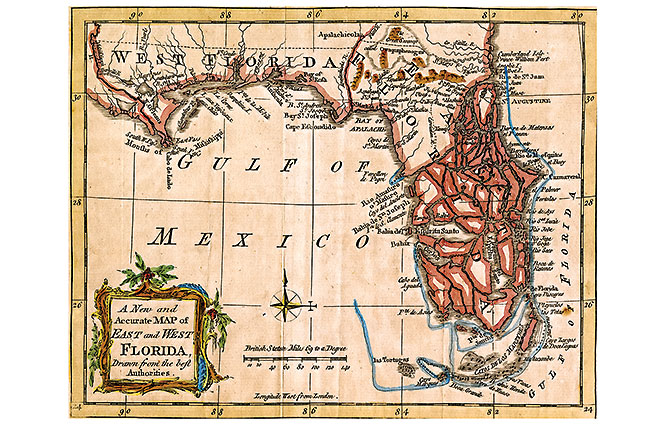 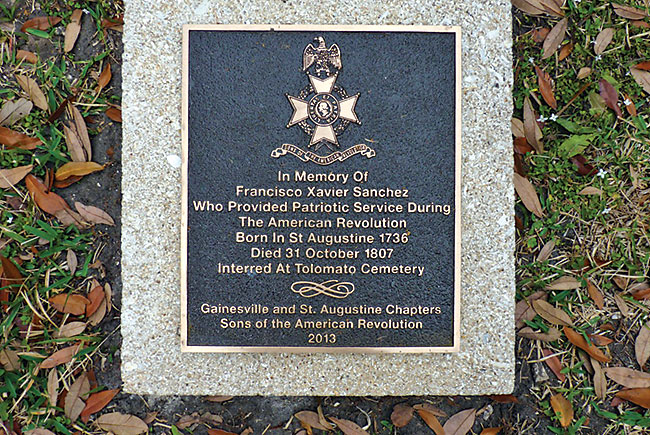 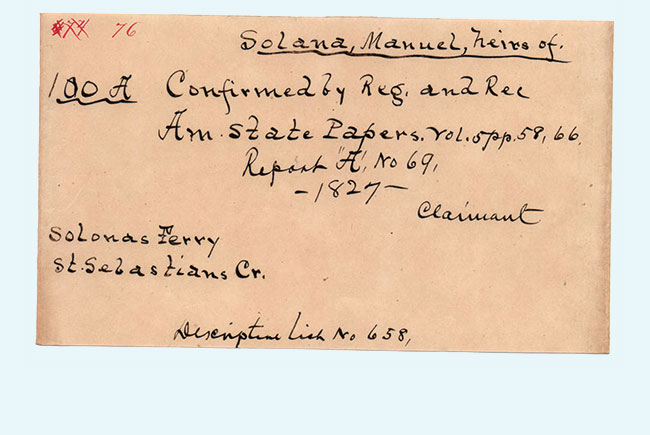 A land grant dated 1827 for the heirs of Manuel Solana. 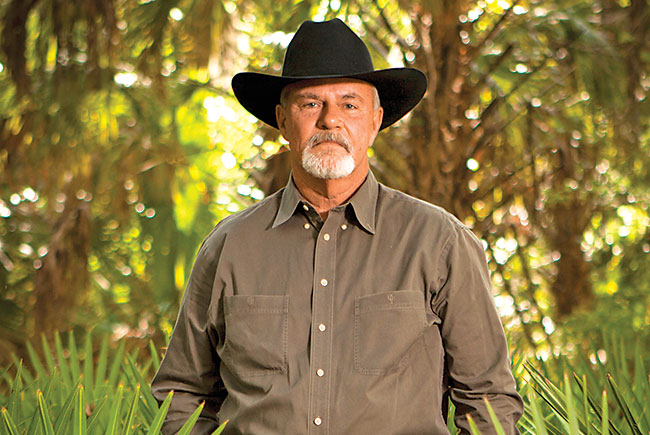 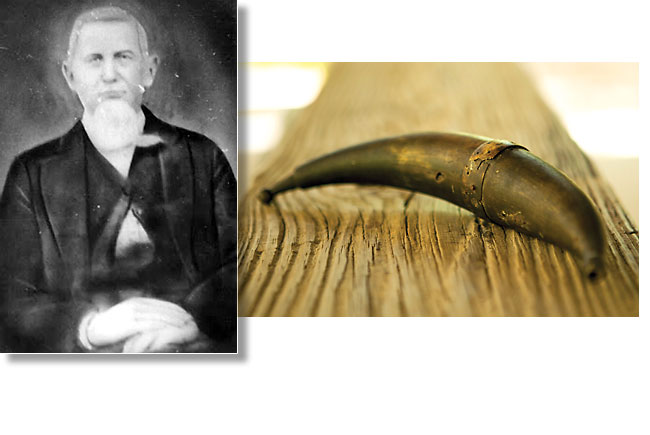 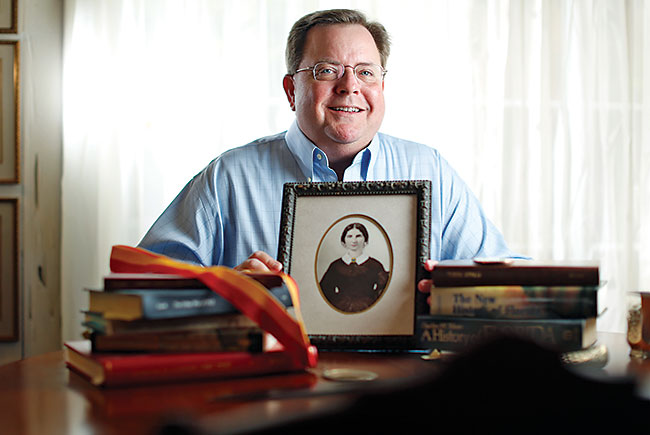 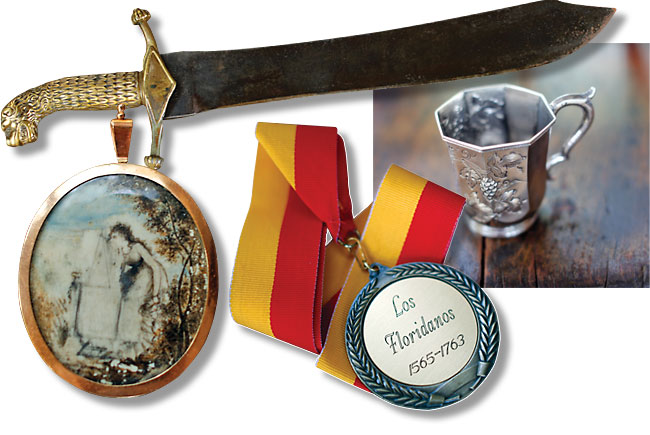 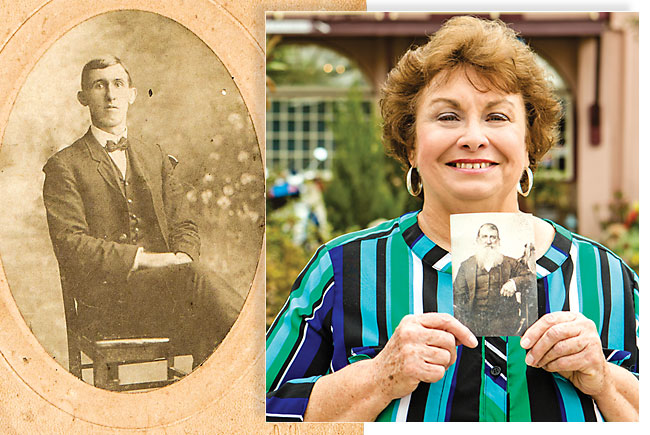 Linda Brown, (at right) in front of the original Manuel Solana house in St. Augustine, holds a photo of Mateo Simeon Solana, grandson of Manual Solana, her great-grandfather. On left, Charles James Solana 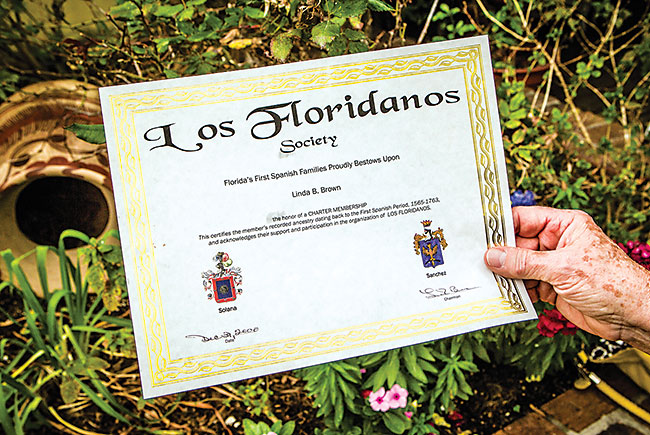 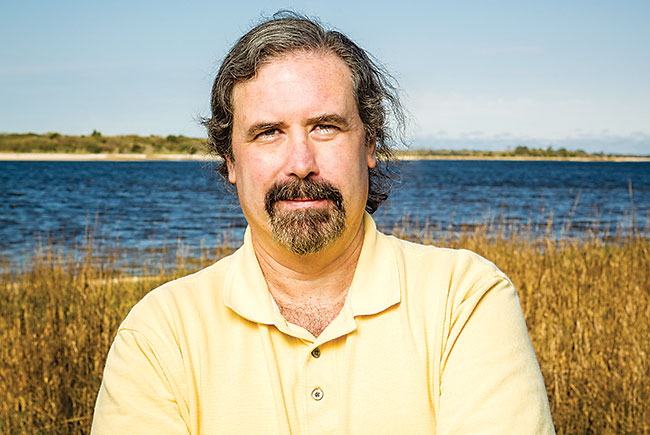 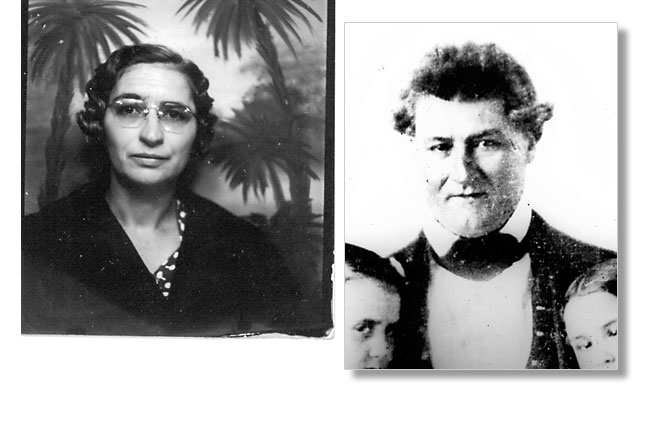 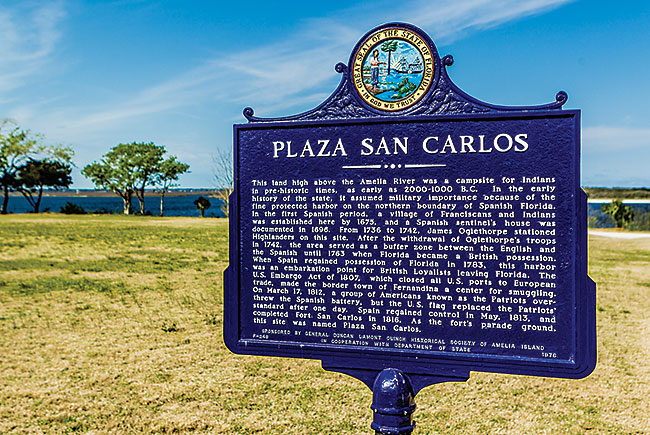 Marker showing the location of the original Fernandina town site.

Two entrepreneurial Spaniards who chose to stay in Florida when the British took control in 1763 became wealthy -- and began family trees whose branches include present-day Floridians.

Pedro Menéndez de Avilés established the first Spanish settlement in St. Augustine in 1565 -- 42 years before Britain set up its first colony in Jamestown.

Menéndez cemented Spain's control by wiping out a competing French settlement near present-day Jacksonville and then slaughtering survivors of a French fleet that was wrecked in a hurricane on their way to reinforce the settlement.

For the next 200 years, the Spanish swatted mosquitoes, killed, enslaved and evangelized native Americans and went about the business of colonization, building forts, missions, ranches and farms.

In 1763, however, the Treaty of Paris that ended the Seven Years War (known in the U.S. as the French and Indian War) required Spain to hand Florida to Britain. In exchange, Spain got the Philippines and Cuba, which at the time was a bigger prize than Florida -- by the 1730s, Spain had largely abandoned the missions that had dotted Florida's northern tier ["The Mission Culture," page 122], and most Spaniards lived near St. Augustine and Pensacola and their military garrisons. Havana, meanwhile, had become the trading center of the Americas, and the sugar produced in Cuba was a lucrative crop.

Most of the roughly 3,100 Spaniards living in St. Augustine and Pensacola had good reasons to head for Cuba. "People left, in part because they were nervous about being under the British government," says James Cusick, curator of the P.K. Yonge Library of Florida History. Since most received support from the Spanish crown, they also feared being left without a paycheck.

"The Spanish government was rather insistent that people not stay. They didn't want to lose all of these subjects to another power," Cusick says.

Not everyone pulled up stakes, however. Two men, Francisco Sanchez, 27, and Manuel Solana, 23, saw opportunity amid regime change. (Originally, Francisco's brother Lucas was supposed to stay behind. However, Lucas had a girlfriend in Cuba and asked that Francisco stay in Florida in his stead.) Six others were permitted to stay; all were given strict responsibilities. Solana was to handle the sale of boats left behind by the Spanish, and Sanchez was to handle cattle and horses, according to genealogical research compiled by Frank Sanchez Jr., a now-deceased descendant of Sanchez.

Staying meant swearing an oath to the British crown -- the very government that Spain had just fought. But there was an upside. "They were ranchers, and not in the government employ," Cusick says. "They were in business for themselves. The British are coming in, bringing troops. Those troops have to eat. There was a big market for cattle. So for them, it was a business opportunity." By staying, Sanchez and Solana could keep their lands.

Francisco Sanchez's father, José Sanchez de Ortigosa, had come to America from Spain in 1713 and married Juana Perez, who was born in St. Augustine and was descended from settlers who were among the first arrivals from Spain in the early 1600s.

Like most Spaniards who made the trek to Florida, José Sanchez came with a land grant. But it came with strings: Landowners were expected to improve the land or face losing it.

The Sanchez family land -- in present-day "Palm Valley," just south of what's now Ponte Vedra -- was crucial to Francisco Sanchez's fortunes. Then as now, cattle were a part of the Florida economy. In Sanchez's era, the ranches meant the Spanish didn't have to rely on supplies brought in by ship. In addition to cattle, the ranches featured carpentry and ironworking shops. The family also got a boost when one of Francisco Sanchez's brothers married into another cattle ranching family, the Espinosas.

During the 20 years the British occupied Florida, Sanchez built his Palm Valley holdings to 1,000 acres.