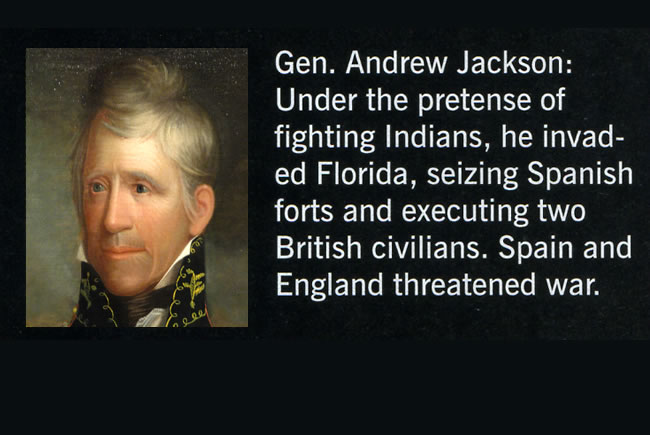 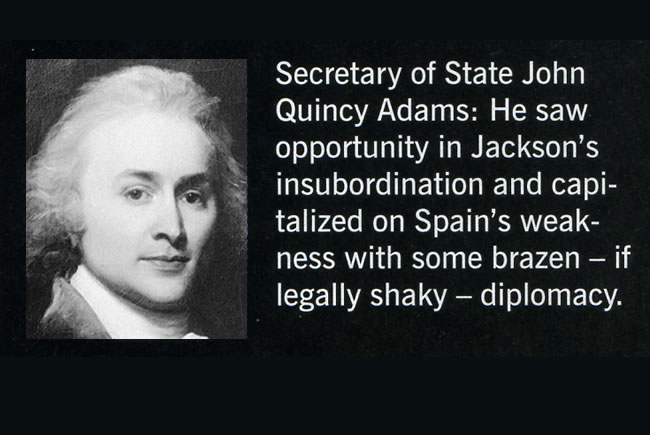 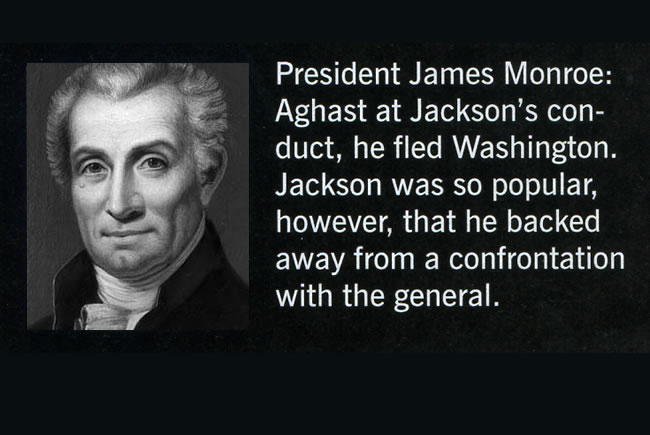 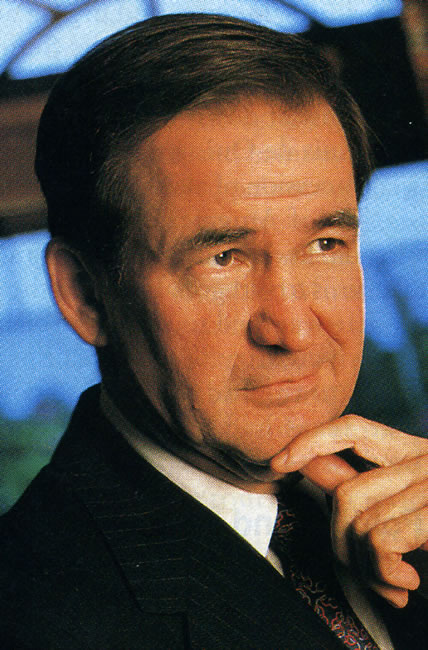 “Diplomacy without power is feeble, and power without diplomacy is destructive and blind." - Hans J. Morgenthau

The two decades of the 19th century were the “time of troubles” for the once-glorious Spanish Empire. Madrid still held title to East Florida and part of West Florida, but had stripped both provinces of troops to put down rebellions erupting across Latin America. Unpoliced, the Floridas became a haven for fugitive slaves, pirates, renegades and Indians who regularly crossed into U.S. territory to pillage, burn and murder. President James Monroe gave the assignment to clean out the nests of villainy to Gen. Andrew Jackson, now in command of the U.S. Southern Division.

Earlier, Gen. Edmund P. Gaines had been authorized to chase the Indians out of Georgia and back into Florida, but to respect the Spanish forts and flag. Jackson was more ambitious. He wrote the president: “The whole of East Florida [should be] seized and this can be done without implicating the Government. Let it be signified to me through any channel that the possession of the Floridas would be desirable and in sixty days it will be accomplished.” Jackson’s letter to Monroe going north crossed one from the president coming south, which stated with fine diplomatic ambiguity: “The mov’ment against the Seminoles will bring you on a theatre where you may possibly have other services to perform. Great interests are at issue.”

With all the authority he needed, Jackson stormed into Florida. In April 1818 he seized St. Marks, tore down the Spanish flag and hoisted the Stars and Stripes. Two British subjects had the misfortune to fall into his custody: Alexander Arbuthnot, a 70-yearold Scot who sympathized with the Indians, and Robert C. Ambrister, 21, a mercenary and former lieutenant in the Royal Colonial Marines. Jackson ordered both court-martiaied. Arbuthnot was convicted of alerting the Indians to Jackson’s coming and providing them with ten barrels of powder. He was sentenced to be hanged. Ambrister pled “guilty with justification” to “assuming command of the Indians in a war with the United States” and threw himself on the mercy of the Court. He was sentenced to be shot, but one of Jackson’s officers reversed himself and resentenced him to 50 lashes and a year’s confinement. Next morning Jackson reversed the act of clemency. Both men were executed; in a report to John Calhoun, the Secretary of War, Jackson called them “unprincipled villains” whose execution should warn others of the retribution coming to “unchristian wretches” who aided the Indians.

Jackson was not finished. Claiming he had reports of more hostile Indians near Pensacola, he marched there, seized the capital of West Florida, and packed the Spanish governor and his garrison off to Havana.

Broward Schools Superintendent, Dr. Vickie Cartwright, talked about some of the measures they're taking to make sure there's a teacher in every classroom.