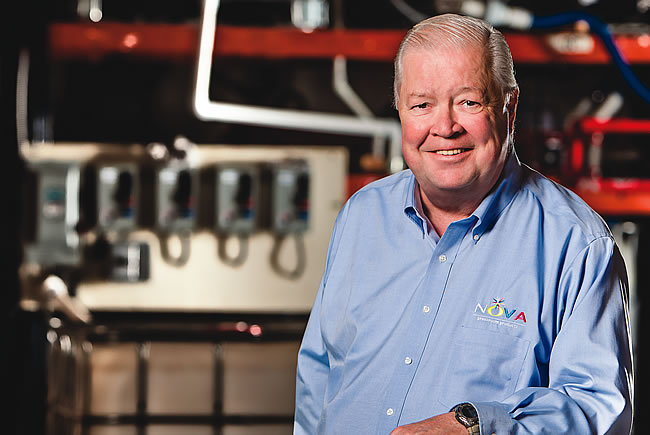 The publishing industry isn’t filled with optimism these days, with many newspapers, bookstores and magazines fighting for survival. Despite long odds, Jacksonville resident Ron Rose and his two partners started a business that depends heavily on the health of that industry.

Nova Pressroom Products makes chemicals and other products used in printing presses. Rose’s products are used to print newspapers, magazines, direct mail pieces, coupons and packaging. Rose learned the business after a 30-year career working for a division of Fuji Film, which closed its Jacksonville factory in 2007.

With a Small Business Administration loan, Rose - along with Chuck Malspeis and Ray Brady - launched the business that same year and hired many of the same factory workers. “We started at zero dollars and four people,” Rose says. Now he employs 20 and has annual revenue of $11 million, up from the $1.5 million his first year.

Rose has closely watched the financial health of the publishing industry. To maintain revenue growth he has diversified into more stable industries, such as printing labels for the packaging industry. “That’s still a huge business in the United States,” he says. Packaging makes up about 8% of his total revenue.

He also has grown his exports, selling pressroom products to Latin America, Asia and Canada. He exports 25% of Nova’s products overseas, he says, earning him the SBA’s “Exporter of the Year” award for Florida. “The main reason we can continue to grow is we’re still a relatively small player in a pretty big market,” he says. The estimated size of the pressroom products industry is $250 million.