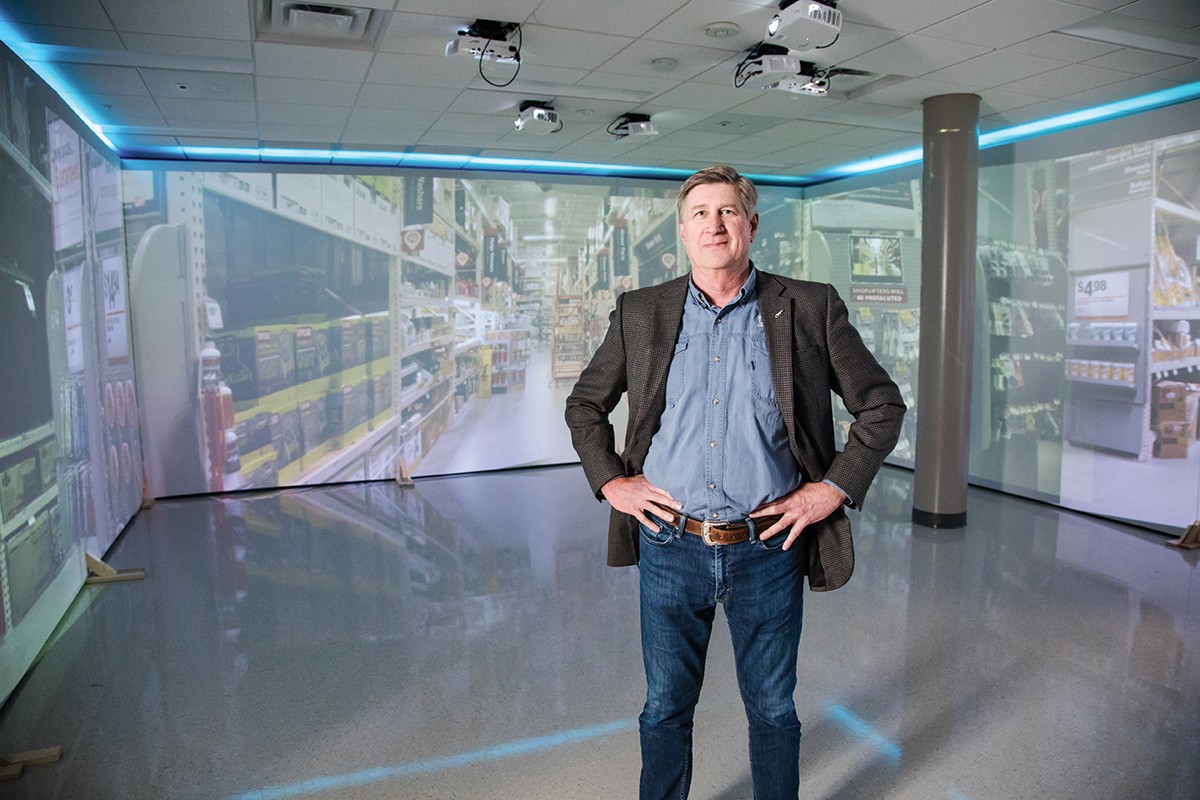 Read Hayes twists a gray plastic knob securing Gillette Fusion razor products to a retail rack. The razors are one of the most stolen items in retailing, readily convertible to cash through online sales and other means. Retailers “might make five cents on a $14 pack,” he says. “So you lose one. How many do you have to sell just to get back and break even?”

As Hayes turns the knob, it makes attention-grabbing clicks before releasing a single pack. If he wants another, more twisting, more clicking, more delay. For Gillette customers, it’s barely an inconvenience. For professional shoplifters, known as “boosters,” it’s a crime buster.

Hayes spends his days discovering what thieves don’t like; they tell him they “don’t like noise.” Criminologist, raconteur, researcher, he co-founded and leads the world’s top organization for studying how to combat retail theft — an industry-funded organization called the Loss Prevention Research Council in Gainesville. At any given time, he’s sharing the science of loss prevention with American retailers, California legislative aides or European authorities.

Loss prevention is much in the news. Organized mobs hitting luxury goods stores. Thieves raiding cargo trains in Los Angeles. Target and Walgreens abandoning San Francisco stores largely because of losses and the fear of losses from brazen shoplifters since California decided to categorize any haul under $950 in value as a misdemeanor.

The National Retail Federation’s 2021 security survey — which Hayes helped start decades ago with colleagues at the University of Florida — reports average shoplifting and robbery losses are up. Violence against employees and customers is an increasing threat. Retailers’ median loss to shrinkage — the industry term for merchandise that disappears without payment — is 1.4%. It adds up, across a vast industry, to about $50 billion. Given the ranks of the criminals, retail theft touches a variety of societal ills: Human trafficking, illegal immigration, homelessness and drug addiction.

Hayes, a native Floridian whose family in Florida dates to the 1830s, grew up in Winter Park, the son and grandson of University of Florida-educated physicians. He enrolled in Valencia College in the 1970s as a criminal justice major with hopes of becoming a game warden. There, at age 18, he saw an ad on a bulletin board for a store detective for Robinson’s of Florida, a clothing store chain, at the Fashion Square mall in Orlando. “Making $2.85 an hour,” he says. “I still have shoplifter scars from all kinds of things. Razors. Teeth. It was always rough.”

Aside from providing a source of stories to tell, the experience gave him an early education in the retail industry. His conversation is dotted with jargon like “rounders” for circular clothing racks. He also drops store detective tips: “You always listen for breaking hangers.”

From the Orlando police academy, he was recruited at 19 by Osceola law enforcement to work undercover as a student at a high school with a meth problem. After transferring to UF to complete his criminology degree, he interned for the Florida Department of Law Enforcement. Later, he interned with the Alachua County Sheriff’s Office as a deputy on road patrol, which allowed him to pull up to parties at his frat house in a marked cruiser.

After UF, he worked cattle for his family in Orange County and then — returning to retail — he became a loss prevention manager for J. Byrons, a department store chain. He wrote four books on retail theft prevention. (He also joined the Army, another reservoir of stories, and obtained his doctorate from the University of Leicester in England.)

Hayes came to the attention of a Minneapolis executive, King Rogers, a legend in retail loss prevention at Target, itself seen as a leader in loss control. Rogers wanted to know whether the industry’s anti-theft practices actually worked. He “challenged” Hayes to do a study. The results established Hayes’ bona fides for using scientific methods to study loss prevention and lined him up to redefine the industry’s approach.

Rogers connected Hayes with Target’s Central Florida loss prevention manager, Marvin Ellison (now CEO of home improvement chain Lowe’s) who got Hayes access to apprehended shoplifters. Hayes interviewed them and, through them, met others who didn’t get caught. Over time, he interviewed hundreds about what they stole and their view of store security measures. He and Rogers presented the findings at a 2000 industry conference. Rogers then cajoled the industry’s loss prevention executives to financially support creation of a research organization to be headed by Hayes, who joined UF as a research associate in 2001.

Hayes is still with UF, and the Loss Prevention Research Council — a freestanding organization — is housed on the second floor of UF’s entrepreneurial support building, UF Innovate@The Hub. Its 72 member-retailers include, among others, Walmart, Target, Publix, Lowe’s and Home Depot, collectively with 200,000 stores globally. Each member retailer pays $6,300 a year, as do 90 “solution provider” security and tech companies drawn by the chance to collaborate with decision-making loss prevention executives and the research.

“LPRC is unique because it takes a scientific approach to the challenge of loss prevention and asset protection,” says Randal Dunn, technology leader at Sensormatic Solutions, a Boca Raton-based retail support company. Working with the council, Dunn says, allows Sensomatic to test its thinking and hypotheses about best practices, vet product concepts and participate in a community debating and discussing loss prevention.

The council researches myriad protection issues: Supply chain theft, active shooters and office safety. But, Hayes says, its main focus is protecting against shoplifting and, of equal priority as its risen in the last decade, violent crime. One area of increasing study: Parking lot design, lighting and landscaping.

Hayes has turned the Hub’s campus block into a testbed — the UF SaferPlaces Lab — for street crime-prevention and monitoring tech, with solar-powered towers running cameras, various types of sensors and monitors, gunshot detectors and more. He says his primary UF role is research into how to protect people in public places.

The council’s second-floor digs are short on offices and long on test spaces. There are drones, virtual reality headsets, an immersion simulation lab and eye-tracking devices that researchers use to learn what subjects no tice rather than what they say they notice. A mock store serves as a one-stop place to see hundreds of tech offerings from industry players, including that clicking knob securing the Gillette razors. In a published journal study, Hayes and researchers outfitted razor racks at 14 stores with the knobs, another 14 stores with video monitors and 14 as a control. The video monitors were ineffectual. The knob cut theft by 21%.

Hayes’ insights are arcane and interesting: Opioid users are often deterred more by the presence of store personnel and cops than by technology, for example. Both consumers and offenders come through the council’s test labs. He studies friction and the tradeoff between inconveniencing customers and preventing thieves from victimizing customers, employees and the stores. Friction, it turns out, is measurable — customers understand why a retailer would lock up a pricey Dyson cleaner but chafe at needing a clerk to unlock a bargain-basement vacuum.

Hayes points to two surveillance cameras — one obviously a camera, the other a discreet orb that some confuse with a smoke alarm, wifi hub or radon detector. Retailers should want thieves to know it’s a camera, Hayes says. He has a mantra: “See, get, fear” — help offenders notice a device, let them understand what it does and therefore deter them.

Verizon recently implemented a time-delay strategy. The bulk of store phone inventory is kept in a safe that opens only after a delay. The slow opening gives police time to arrive, and, just as importantly, thieves don’t like to wait. “A lot of what we decided to do, LPRC was asked to research for us,” says Dave Magersupp, senior manager in loss prevention for Verizon corporate security.

Indeed, Magersupp says, much loss prevention tech and strategies used industrywide came from LPRC research. “We can brainstorm ideas, and they can do the back-end research. They’re a very unique group,” he says. “Hayes is “one of the premier specialists in the industry.”

Rogers, the retired Target executive, says the council has raised UF’s profile among retailers, loss prevention executives and law enforcement. Ireland-based artificial intelligence, computer-vision tech company Everseen — six of the world’s 10 largest grocery chains use its tech to monitor self-checkout — opened an office in Miami in 2020 and relocated its A.I. chief from Serbia in part because it was drawn by Hayes’ research for UF and the council.

Self-checkout cameras are projected to be a $5-billion market by 2024. The cameras and retail innovations such as curbside pickup promise to keep Hayes and the council busy on research for years to come. This year, Hayes added two researchers who are experts in mapping technology. He hopes to hire a data scientist and other help soon. Last year, Hayes met in London with people interested in forming a Europe-focused LPRC.

The difference between retail theft now and when he was a teenage store detective, Hayes says, is “the incentives are greater and the downside is less.” Once, shoplifters faced more severe punishment. They had trouble selling stolen goods. Selling at a flea market might bring just pennies on the dollar. Thieves themselves faced becoming victims of stronger criminals.

Now, stolen goods can be sold online. Then there are the prosecutors in some venues who don’t want to bother with shoplifting cases. Alvin Bragg, the new District Attorney in New York, this year told his prosecutors that if armed robberies didn’t lead to physical harm, they should be treated as misdemeanors, though, after prolonged criticism, he said he was misunderstood and partially reversed that decision.

“We’ve interviewed robbery victims where no shots are fired. They’re permanently traumatized,” Hayes says. “There’s harm. I mean real harm. You get these non-scientific justice reform things. When you come out and do bail reform and you do this and you do that — that’s not evidence based at all. We stand up hypotheses. We collect evidence.”

Society, he says, needs to “re-establish the downside.”

Lessons from the Front Lines

The “insider threat” — theft by a store’s employees — accounts for 10% to 40% of retailer loss, depending on the store type, Hayes says. (Furniture stores don’t get a lot of shoplifters.) The loss comes from a range of issues: Negligent employees, like a jewelry counter clerk showing rings who turns his back to take a call, employees “under-ringing” or “sweethearting” sales to friends and family, and then those who just steal goods. Hayes says the answer lies in pre-employment screening for indicators of past dishonesty. For losses at distribution centers, screening employees as they arrive and leave is an answer.

In Florida, both major retailers and mom-and-pops take hits from shoplifters and thieves. Organized gangs have targeted Publix. Armed robbers of late have hit auto parts stores in Southeast Florida. State Attorney General Ashley Moody recently launched a task force and a shareable, searchable database so that police and retailers can move quickly to identify and stop organized retail theft rings. She worked with legislators this year on revising statutes to allow prosecutors to bring stronger charges and penalties against people who steal multiple items from multiple locations in a short period of time.