A makeover for Port Canaveral 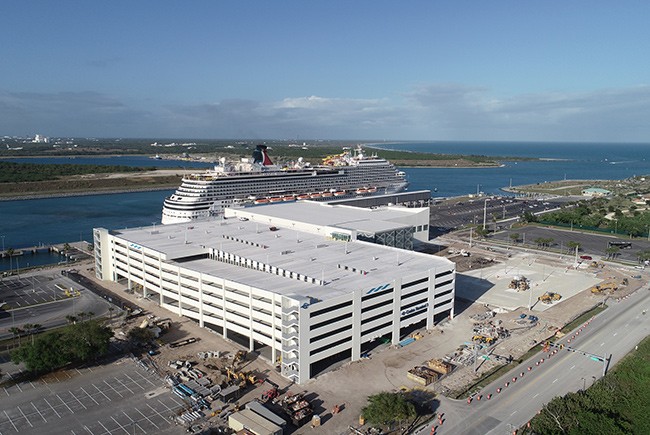 Since it was built in the 1950s, Port Canaveral has evolved from a small fishing and oil port to the second-largest cruise port in the world.

It continues to grow. Last year, the port broke ground on Cruise Terminal 3, a $163-million complex to include a 188,000-sq.-ft. building and a parking garage that can accommodate up to 1,800 vehicles. It will serve as the home port for the Mardi Gras, a 6,600-passenger XL class cruise ship that will be the largest in the Carnival Cruise Lines’ fleet when it’s delivered in November. It will also be the first vessel in North America powered by liquefied natural gas.

The port is also renovating two other cruise terminals in preparation for the December 2021 arrival of a third Disney ship called the Disney Wish, another LNG-powered vessel.

While the cruise industry grapples with the coronavirus, Capt. John Murray, port director and CEO, predicts continued cargo growth if the economy stays strong. “As long as we’re growing as we are in Central Florida, there will be a continued demand for lumber, the aggregates they use for road and bridge construction. All those types of commodities will continue to flow through the port. In a recession, those commodities will probably taper off for a bit.”

In March, the Central Florida Expressway Authority completed work on the SR 408 and SR 417 interchange, the second-busiest interchange in Central Florida. The four-year, $91-million project widened 417 between Berry Dease Road and SR 408 from three to six lanes. Three sound walls were constructed, along with two new ramps and two realigned ramps to ease rush-hour congestion and improve traffic flow. The interchange links northeast Orlando and downtown and provides a direct route to the airport from north Orlando.

Florida’s first diverging diamond interchange opened in 2017 in Sarasota at I-75 and University Parkway. Now half a dozen are being planned along I-4, starting with the Sand Lake Road and Daryl Carter Parkway interchanges in Central Florida.

Proponents of diverging diamonds say they improve safety and traffic flow by virtually eliminating left turns into oncoming traffic where interstates meet busy local roadways. They work by temporarily shifting traffic to the left side of the road at a traffic signal as drivers navigate under or over the interstate. Drivers entering the interstate can then merge left onto the highway without encountering any oncoming traffic. Cars that aren’t getting on the interstate simply stay in their lanes as the road shifts back to right past the interstate.

Nearly 51 million passengers came through Orlando International Airport in 2019, making it the busiest airport in Florida and the 10th-busiest in the nation. The airport is working on a $4.2-billion expansion that includes a new South Terminal Complex that will add 19 gates that can accommodate an additional 10 million to 11 million passengers. The three-story terminal, scheduled for completion in 2021, will also feature automated TSA screening lanes, facial recognition technology and indoor and outdoor green space. From the terminal, travelers will eventually be able to travel via Virgin Trains between Orlando and South Florida.

Florida ports are addressing rising sea levels without panicking. Wharfs, berths, cranes and warehouses get replaced regularly over 20- to 50-year life cycles as use and exposure to sea and salt air take their toll. With the Army Corps of Engineers and NOAA projecting 1.65 to 3.95 feet of rise by century’s end, the ports don’t need to immediately drop hundreds of millions of dollars to adjust for sea-level rise. They can accommodate higher seas as they rotate in new equipment and improvements, which ports do anyway as ships get larger. Port Everglades added six feet to the height of a new bulkhead being built. — Mike Vogel